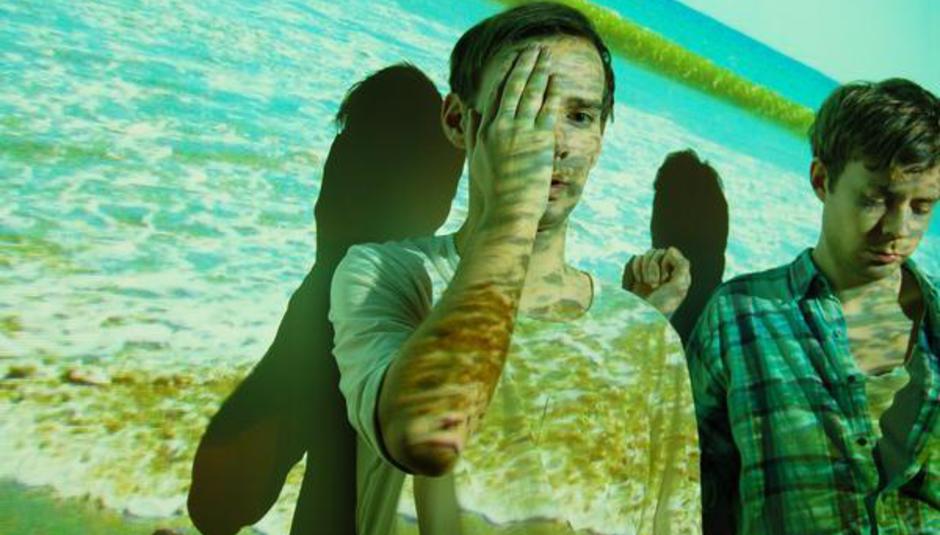 "It's as if the season mocks my sadness" ('Never Content'). Most of the UK's kind of playing catch-up here, but Air France's blissed-out party music is something that probably wouldn't have sounded quite right when the rain and snow was falling. It still is? Oh. Hailing from two small towns near Stockholm, Swedish production duo Joel Karlsson and Henrik Markstedt's stock-in-trade is dance music that appeals to the full range of the senses. It's head 'n' heart, eyes 'n' ears stuff, not trend-obeying beatmeistering aimed squarely at the "leathered 'lectro gibbon"* demographic. Theirs is a sample-heavy sound as much in thrall to the Balearic beats - much loved in Sweden right now - and The Avalanches as, say, the whole 80s-revivalist thing. Still, the pair will readily admit to loving St Etienne, and it'd be bordering on the heretical for them not to. UK contemporaries? At their most lively, we're hearing The Go! Team at their most laid-back. Approximately. Influences aside, open-eared latecomers to the Air France dance-party will revel in No Way Down, a compilation of their two previous import-only EPs (the identically-titled No Way Down and _Free Trade Winds) recently released in this country. Their remix of Friendly Fires track 'Skeleton Boy' can be heard over on their Myspace page right now, and is a great introduction to their hedonistic summer sound. Rob Webb

* Our eternal gratitude to NME's Mark Beaumont for that little gem.

No Way Down is out now via Something In Construction. UK (DJ) dates as follows: A name that may be familiar to some through her work with Dirty Projectors (with whom she sings, provides samples and plays bass/keys), Angel Deradoorian is striking out on her own with an EP released stateside this May, and from the snippets DiS has heard it looks to be a wholly beguiling prospect. Born to professional musician parents, 22 years old and of innate ability clear to anyone who’s seen her play with Dave Longstreth et al, the tracks up on MySpace nevertheless confound, deftly traversing: choppy, icy soul ('High Road'), plaintive piano balladry ('Grey Teeth') and an undulating R'n'B groove ('You Carry The Deed'). While it’s the electronic swoop of the former that initially impresses, '...Deed' constitutes the most enduringly remarkable of what’s on offer, where over the sparsest of acoustic backdrops a lattice of vocals is spun to ends mesmeric. Much like the band for which she’s best known, there’s a whole lot going on here: an array of influences including classical, popular and world styles (McCartney, Can and Tunisian flute solos are all referenced). From the off though, is the sense Deradoorian commands a unique and wieldy talent that refuses to buckle under the weight of its own fecundity: stylistically acrobatic, sure, but always affecting. Ringing out against a wall of plangent ivory, the mournful implorations of 'Grey Teeth' claw at the emotional jugular with particularly devastating effect. James Skinner

Deradoorian's Mind Raft EP can be ordered online via her label, Lovepump United. Once upon a time, Michael Benjamin Lerner was just a one man act peddling his sunshine-pop in the various bars and clubs of Seattle. Then, one night, producer and guitarist Chris Walla of Death Cab For Cutie caught his show and, sensing a kindred spirit, took him into the studio and began recording. One track a day was how they worked, on analogue equipment, until a self-titled album was completed. Adopting the object-shifting name of Telekinesis, Lerner created a collection of straightforward but dynamic power-pop calling to mind Photo Album era Death Cab, Weezer, The Shins and Beck. Good time summer anthems with an upbeat and positive outlook fly by at an impressive rate, each of Lerner's songs seemingly tries to outdo the last for unforgettable melodies. The song-craft is plain to hear; this is one man’s band, with the voice and the vision coming through loud and clear. 'Coast Of Carolina' starts with a lo-fi beat up acoustic guitar strum before giving way to a tidal wave of power chords and anthemic choruses - if Walla has a 'Radio Friendly' button in his studio, he clearly pressed it numerous times during the recording of this, and fellow album cuts 'Foreign Room' and 'Tokyo'. With song titles like 'Imaginary Friend' and 'Awkward Kisser', you get the drift of who Telekinesis are aimed at, but if you fall into that post-Seth Cohen bracket then this is an album to well and truly lose yourself in. Having become a fully fleshed out four piece, the live band are currently touring America before heading to Europe in June. As the holidays and BBQ months approach, Telekinesis could well be the soundtrack to this year's holiday romance - and the oh-so inevitable heartbreak that follows. David Renshaw

Telekinesis! is available now, and can be streamed for free on the Merge Records website.