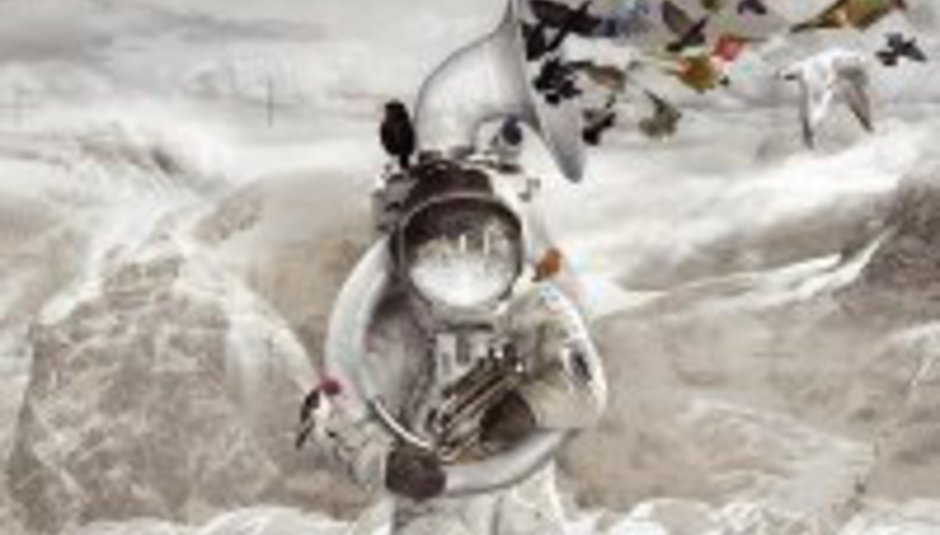 We're listening to thumping French techno surrounded by 20,000 students and farm workers drunk on cider in a giant shed somewhere - we've no idea yet where - in the middle of Brittany. Sounds weird? It is, but in the best tradition of eccentric foreign festivals.

On the same weekend that ATP's Nightmare Before Christmas went metal, a handful of brave Brits skipped over the Channel to go mental with thousands of excited Bretons at one of Europe's oddest festivals of new music. The line-up though is one that ATP fans would probably be fairly happy with (excluding Iglu And Hartly, of course, but more of that later).

The main venue is a cross between the sprawling exhibition halls of the NEC and the crumbling tin sheds and concrete floors of Hereford Cattle Market. Soberly reflecting on the geography of the place later, we discover that this "Expo Parc" is located right at the end of Rennes Airport's runway, on the western outskirts of Brittany's capital city. The Expo Parc is not pretty. But the centre of the Roman city of Rennes certainly is. And as well as the out of town venue, bars and clubs in the city also host more intimate gigs over the weekend.

This festival of new music is celebrating its 30th anniversary, and in typically French style they want to champion their best home-grown music. But despite that they also allow foreign bands in too. Like Londoner Tim Exile, who shamefully kicks off Wednesday night's proceedings by prancing around the stage at Bar Ubu like a robot on crack, dressed in silver and bashing out fourth rate electro. He even makes Ali Love look good.

Thursday starts off with the band who take nomenclature to new depths of stupidity: We Have Band. How could they do that to the English language? But, despite this, the former EMI Records employees (yes, really) actually mine a reasonably enjoyable seam of hipster pop - mixing clattering rhythms with plonky keyboards on catchy tunes like single 'Oh'.

The rest of Thursday is like X Factor night - packed with tribute acts. We catch The Popopops, essentially the French Arctic Monkeys. Their indie-pop dirge is going to win them few fans outside their own country. Following that we see Jay Reatard, who channels the spirit of Nirvana into his neo-grunge set, but spoils it by grumpily insulting the audience in English. Cage The Elephant also make a good job of impersonating their heroes - in this case The Hives - but leave us feeling bored rather than excited.

Highlight of the evening is Brighton's Maths Class. Another apparent tribute band, who appear at first to be in thrall to Foals but, actually, they offer more than just skittery indie-dance. For ones so young, there's a surprising emotional depth to their songs, a nervy yet impassioned live performance and some thrillingly jittery synth-fuelled math-rock to boot. Definitely ones to watch in '09.

But, we reach a nadir when the unspeakable Iglu & Hartly come on. Could this coterie of c**ts be the worst live band on the planet at the moment? Whichever idiot originally compared them to LA scenesters like HEALTH deserves to be taken out and shot. Perhaps their record contract was inked on such a premise, but actually the reality of this car crash of a band is that they simply jump around semi-naked (remember it's very cold too) yelling about "cars" and "cities" with something that sounds like a pre-recorded backing track of turned down guitars for company. Truly risible stuff.

On Friday Transmusicales falls victim to some slightly esoteric programming, whereby the biggest and best band of the weekend - Bon Iver - are put on at a small town centre venue at 5pm. Justin and his merry troubadours still raise the roof, but how much better would it have been to see them headlining a sweaty room filled with believers as the 11pm highpoint of the fest? New track 'Blood Bank' promises much for the future of the band too.

Friday night is dance night at the Parc Expo site and after stuffing our faces with steak frites we head into the melee of flailing farmers and pissed up kids from the uni. The Shoes, Filthy Dukes and Birdy NamNam supply the beats until 5am. El Guincho and SebastiAn are the pick of this particular crop though, the former a Canary Island wonder who makes Afrobeat sound amazing, the latter a French techno whizzkid who makes wonky but pulsing records and remixes.

Saturday sees the festival wind down with a bout of horrendous on-stage antics from Budam - the Faroese Iglu And Hartley. Imagine: a stage school drop out flouncing around flamenco dancing and doing spoken word skits about dead babies. The Faroe Islands government feed and water us well with a fish banquet and copious quantities of wine before this show, and perhaps the 45 year old mussels we eat are giving us hallucinations... anyway, we have to mention that the islands have produced some great music - like Teitur - to make up for this shite. Otherwise our promised Puffin won't arrive in the post.

And for dessert we have plodding but acceptable rock 'n' roll from The Black Angels and some truly warped wonk-pop from 70s vets The Residents. Just when we think it's all over we get one last surprise: Ebony Bones. Cruelly underappreciated in her native London, Ebony's stage show - featuring live band, sexy dancers and a slew of synths - has developed to such an extent that is it now a one-third mix of Kelis, Basement Jaxx and MGMT. Which suits us fine.