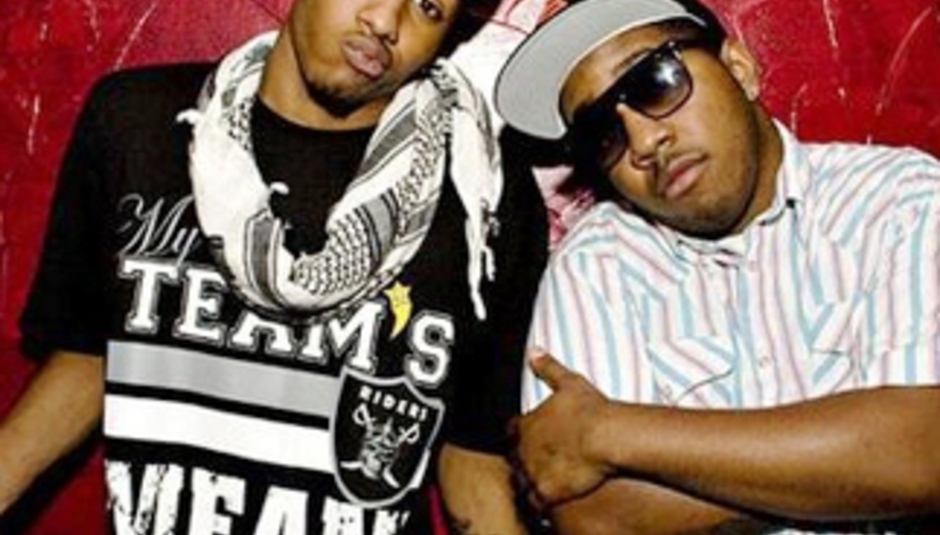 A slew of critics have proclaimed Chicago/Detriot hip-hop duo The Cool Kids as some throwback bastard, sucking on Eric B and Rakim samples and playing out feel-good lines about “bringing ‘88 back” that kick with a failsafe nod back to Kool Herc’s heyday.

Well, that’s what they are to some extent, but there’s a whole lot more in their basket. Far from mere bloated good-timers prattling on about mastering ‘the elements’ and that “no-one lays it down like Bambaataa any more”, there’s more to these kids, who attach an astute minimalism to their lumbering beats; a greater substance that you’d initially think The Neptunes may be behind.

Mikey Rocks (real name Antoine Reed) and Chuck Inglish (Evan Ingersoll) met in 2005. After years learning their trade selling mixtapes over the ‘net on their own imprint C.A.K.E., the pair are now prepping their first record proper, When Fish Ride Bicycles, for some time in the near future. They’re testing wider waters with The Bake Sale, compiling their finest moments so far – it’s soon to be released officially in the UK via XL Recordings, the majority of its material lifted from 2007’s Totally Flossed Out EP.

Meeting at the XL pit with the pair, psyched by the fact they’re playing the Maharishi store later that night, DiS speaks to Mikey and Chuck as one gets their hair clipped and the other chain-smokes spliffs; they swap duties mid-interview. With loose tongues, we talk shop and dispel some myths. On suffering from and surviving ‘the hype’…

Chuck: “We don’t suffer from the hype syndrome as much any more. Hype can’t tour Europe twice. [Europe] ain’t the most forgiving place on the globe to tour without a record. So either you’re good or you suck.

“We don’t polarise our music. We kind of make it how we are, and we got along with a lot of people. That’s not because we try to but it’s just we’re attracted to all types of people and we make music in the same way as our personalities work. It’s probably that we connect to others. If there is another reason then I don’t know it.”

Mikey: “In hip-hop there are no rules, but some people believe there are guidelines: can’t do this, can’t do that, can’t look like this, can’t talk about that. Two, three years ago when we started first making stuff they wouldn’t have that shit and there weren’t any hip-hop shows we could go perform at, us looking like we did and us rapping about the stuff; they wouldn’t have that shit and it underlined there’s some close-mindedness that goes into it. A lot of the powers that be have that attitude and that stigma of what you can and can’t sound like and wouldn’t have accepted it, so that’s what we accepted and pushed it instead. We got a crowd of people who were eager to hear a load of different shit, whether indie rock or jazz.”

Chuck: “They only say that shit about hip-hop. Everybody has to put it in a sort of way for people to have a bit of direction, but nobody asks The White Stripes about that shit. But since we rap and took it back to something we grew up with we get asked that question. That’s just what we we’re about. There’s nothing wrong with that from the beginning – it’s just that people have a sick obsession with classifying everything, especially when it comes to hip-hop artists.

“We’re not seen as musicians. I think that’s because rappers aren’t considered musicians. Not by too many people. Bands though, they’re perceived to work harder to get that sound. Hip-hop artists use samples and shit, so I think that’s why it’s not as criticised as much. Shows are half-arse, beats are half-arsed, rhymes just ride the beat.” (Conversation curtails into where The Roots stand in all this.) The influence of The Neptunes, and sounding better than they look…

Chuck: “They struck up a curiosity with me of ,‘Oh, you can do that?’ I always had that sound in my head but didn’t know how it could be done and they shined a light on it and how to be unorthodox but for it still to sound good. I think I followed that and took it from a load of people. N*E*R*D’s In Search Of… album was the one that showed to me you can do whatever you want and it’s kind of where I’m at with it.”

Mikey: “A lot of the influence was in the imagery, because they would reference a song that I could easily identify as having an old school theme to it but then thinking of completely new age stuff. People would reference a certain song with old school beats and I could clearly see the throwback references, and at that point I saw that people subconsciously associate the picture with the sound of it. Because people say ‘Black Mags’ sounds retro, and I don’t see that.”

Chuck: “He makes an excellent point, because if you put The Pharcyde in a different context they would have been seen as retro hip-hop. They would have been like, ‘This is the new Tribe [Called Quest], they’re exactly like Tribe’.

“I think we make music that’s better than how we look. If you don’t do that then you kinda can’t make it out the gate. You can’t look better than your music. So we can dress and this and that, but that doesn’t make dudes like you. Pretty boy rappers - there’s not too many male Nelly fans. His fans, LL Cool J’s fans, they’re a majority of… dudes don’t want to see you rapping with your shirt off. It’s not the cool thing to do because people aren’t looking at it like that, people are just thinking,

‘Why’s this guy got his shirt off?’ If you’re going to look good, you’ve got to make better music.”

Mikey: “Otherwise it’ll overshadow you and then you’re just a fashion guy. I’ve seen it happen plenty of times, where someone’s image overpowers their music. You could point out some guy as so-and-so but can’t name one of his songs. I know plenty of those.”

Mikey: “If there was a two-piece puzzle – no cheesiness involved – it works like that. Anything that doesn’t click in his head that he doesn’t see probably clicks in my head, and things that I might not see or I’m not conscious of click in his head. It works like that to cover certain bases and it doesn’t clash because the pieces fit into the right spots. If there are two dudes in a group and both of them rap exactly the same about the same stuff then you’ve just got two of the same dude, the same guy rapping the same stuff twice rather than two different perspectives.

“We’re not exactly alike and we look at stuff different and that’s why it works. Look at Outkast – that shit works perfectly. I’ve never questioned the pair of them. They’re both doing exactly what they need to do. It’s like playing Battleships where every peg if filled in and they’re not missing anything. You might receive that initial hate at first and that ‘this is not what it’s meant to sound like’. But once you get that respect it’s there and solid. So, you’ve got to go through the whips on the back and slaps in the face from people when you’re a new artist, but it’s a part of getting respect from the people listening if you want to do your own thing.”

Going it alone and signing to XL after independence…

Mikey: “See, when we came here the first time and met up with the staff, we sat out and talked about music and creativity and people we like with the head of the company. And when the head of company can come and sit and talk tit for tat about their love for whatever that’s already a good sign. And their track record of the super-dope artists they’ve put out is a plus too.”

Chuck: “When all your favourite players are on one team you know who to support.”

The Bake Sale gets a UK release via XL on August 4 and will be reviewed on DiS soon. Find The Cool Kids’ website here, MySpace here, and if you want to see them in the UK… you just missed them.

Get in the mood for The Bake Sale by downloading their That’s Stupid mixtape for free from here.