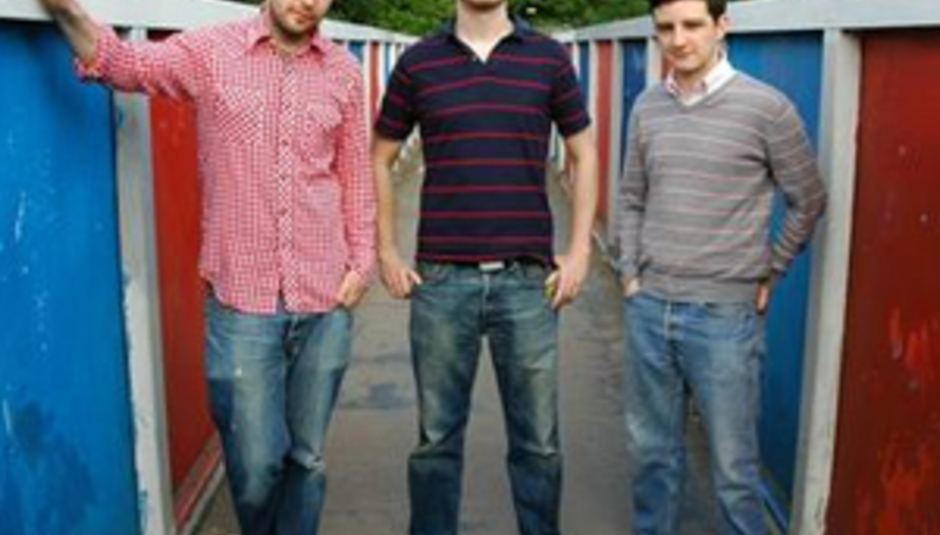 Sometimes DiS does the work, and sometimes the work comes to DiS. Out of the blue via their trusty PR, Liverpool trio Hot Club de Paris have delivered a Track-by-Track guide to their recommended second LP, Live At Dead Lake. Out now on Moshi Moshi, the record is reviewed by DiS here.

This isn’t exclusive to DiS, given the nature of delivery, but enjoy regardless. Words courtesy of HCdP vocalist and bassist Paul Rafferty.

‘Call Me Mr Demolition Ball’
I’ve loved demolition balls for ages. It’s such a clumsy and cruel way to demolish a building. This song is about being an awful companion and likening yourself to a demolition ball. People destroy each other in the clumsiest and most cruel manners. I’m guilty, so I wrote about doing it.

‘My Little Haunting’
I never understood why there are never any contemporary hauntings. I mean, monks and headless cavaliers are totally ace but why do we never see ghosts from the last ten years floating around? For example, where’s the ghost of the dead scally that wrapped his dad’s car the day he passed his test? This song is about the ghosts of relationships that haunt you as you attempt to embark upon the rest of your life, with a hint of Scooby Doo slapstick.

‘For Parties Past and Present’
‘For Parties Past and Present’ is about finding a crumpled phone number in your pocket when you’re at the laundrette washing your clothes and it reminds you of some week night where you stayed up all night and got completely wasted at a party and fancied a girl who was wearing an awesome plaid dress and for some reason you didn’t talk to her and you saw her leave and since then you’ve been wondering who on earth she was and what she was like.

‘Let Go Of Everything’
Sometimes when you do something and it’s not as good as you hoped it’d be, you kind of wish that you’d given more of a shit. And then sometimes things you’ve been worrying about aren’t that bad and you kind of wish you’d given less of a shit. And then you reflect on all this stuff and it’s mainly pointless to do so because you should just be carrying on doing your life and looking on the bright side.

‘Friendship Song’
This is an instrumental song, but I can tell you that it’s named after a song in the ‘Paper Route’ episode of Stella. It’s on YouTube somewhere and is beyond hilarious. (Couldn’t find it, but try this instead – Ed*)

‘Hey! Housebrick’
This is a concise pop song about a house brick hurtling towards a car’s windscreen. The song documents the creeping claustrophobia of small-town living and the destruction and devastation produced by such negative forces. I wanted to write about an occasion where this guy in the town I grew up in smashed every single shop window through the village and ended up by lobbing a brick into the traffic in the motorway.

‘We Played Ourselves (Ain’t Nobody Else’s Fault)’
This is an instrumental song named after Ice T’s ‘You Played Yourself’ from his 1988 classic, Iceberg.

‘Boy Awaits Return of the Runaway Girl’
This song had completely ridiculous working titles that I won’t go into right now. This song was written about a couple I knew who broke up when she went to university whilst he stayed around the town smoking weed. She met someone there who was a cock and only realised this when she came back for the summer. They lived happily ever after, once he stopped smoking weed.

‘The Dice Just Wasn’t Loaded From the Start’
This song was first conceived on a train ride between Finsbury Park Station and Brixton on the way to a We Are Scientists show where we were playing as support. There were a whole bunch of versions floating about that didn’t stick so I rearranged it for acoustic guitar and asked Dave Davison of Maps and Atlases to contribute his expertise when we got to Chicago to record the album. (Download this track)

‘The Anchor’
This is a Minutemen song. We covered it because we spend pretty much all of our spare time listening to them.

‘This Thing Forever Seems To Last Forever’
This is about realising that forever lasts for a really long time. It’s about the closure of a relationship and the final realisation that things are totally finished. That kind of insight can send you a bit mad, and in this case that’s exactly what it does. A mission of destruction through the city is embarked on until the next day is upon us.

‘Found Sleeping’
A dead lake or dead zone is where areas of water contain too much algae so that the water is starved of oxygen and nothing can grow there. This is about a broken and brittle band sleeping in the van by the edge of a dead lake. I suppose it’s about being at the bottom of your game and resorting to blind hope to get you through whatever mess you got yourself in.

‘Sparrow Flew With Swallow’s Wings’
This is nearly impossible to play and sing. It contains words so quick I sometimes have to travel back in time in order to land them. The words are pretty straight forward. It’s about being sad about a girl like most other songs in the world…

* So, Paul e-mailed us the link: watch here