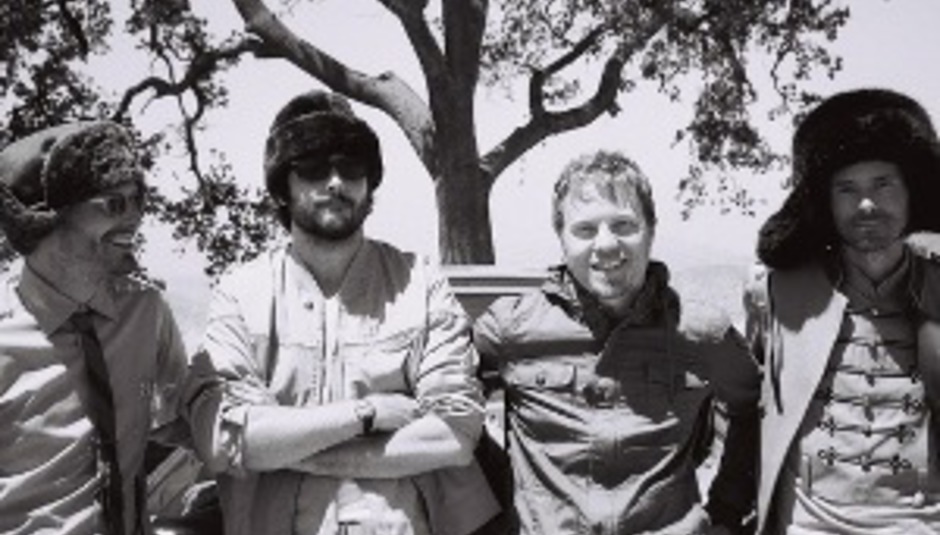 Rogue Wave: a big kiss to a brighter future

Rogue Wave: a big kiss to a brighter future

It has been a rough year for Californian five-piece Rogue Wave. After fulfilling a two-album deal with Sub Pop, the tastemaker label decided against renewing their contract, leaving the band in limbo. Their personal lives were equally rocky, with drummer Pat Spurgeon forced to undergo a kidney transplant; this as good as coincided with the death of guitarist Gram LeBron’s father, and the loss of their former bassist Evan Farrell in a house fire.

The band, led by songwriter Zach Rogue, made their return earlier this month with their third album, Asleep At Heaven’s Gate, released via Island and Brushfire Records; the latter is the label run by their long-time friend Jack Johnson. DiS catches up with the band and finds them looking to the future – Spurgeon, LeBron and newly appointed guitarist Dominic East answer our questions as they prepare for their most recent London show at Dingwalls.

I saw you at the Barfly last time you played, nearly two years ago. Dingwalls is a bit of a step up in size.
Pat Spurgeon: Yes! It doesn’t take much to be bigger than the Barfly. It was small, but it was amazing. I guess it doesn’t matter the size of the venue if everyone’s there for you. In Birmingham we had maybe 25 people at a place that could hold about 300. We were all kinda bummed to walk out and play to nobody, but they were all up front, they all stayed there the whole time. We even got them up onstage, and at one point we went into the audience and made it into a really fun show.

So you’re off to Europe after this?
PS: I thought we were here already?

We don’t really count ourselves as Europe…
PS: Yeah, we’re off to where they drive on the same side of the street as us. It’s kind of weird… we speak the same language, or pretty close, yet we drive on opposite side of the road.

Well we’ve got Australia on our side, you know.
PS: (Laughs) Jeez! Alright, well we’re bigger, damn it! You can edit that (laughs). But yeah, off to Europe. A couple of shows in Holland…
Gram LeBron: …One in Belgium. Three in Germany. I love Berlin. Have you ever been?

Nope.
PS: But you’re right here! It’d be like us driving to Texas.

Apart from the small mass of water in between.
PS: Yeah, you can’t really drive across the water.

Do you usually have a good reaction in Europe?
PS: I think that Amsterdam has been great, London has been great. I don’t know about Germany.
GL: It seems to be a really youthful culture going on there right now and I think a lot of bands are tapping into that. So they tell us.
PS: We just believe what they tell us.

You’re on album number three now. Obviously things have changed quite a lot in the last year or so with labels and personnel. Did it feel like a new beginning for the band?
PS: I would say it was absolutely a new beginning. We took time off between touring and recording the record. We ended up getting a new bass player, Patrick Abernathy, and so we said we’re gonna get back together and figure out these new songs. Also, we had a little bit more of a budget, so we could spend a little extra time on the record as well.

You were with Sub Pop for your first two albums (2003’s Out Of The Shadow and 2005’s Descended Like Vultures) and you’re now on Jack Johnson’s label, Brushfire. Was that a simple changeover?
PS: Well, we had fulfilled our contract with Sub Pop, so we were out on the market again. Zach has known Jack for a long time, and so has Dominic.
Dominic East: Yeah, I met him a long time ago right around the time Zach was putting the band together. This was at a time when Jack was really just emerging as a musician, so they’ve known each other for awhile.
PS: I think [Brushfire] knew about the band from what we had done in the past. It seemed like a great choice, because they’re like a major, but they’re a small label. Everything they do is in-house. They have a recording studio in their facility.
DE: It seems like they run a really tight ship there. And it’s solar powered, too!
PS: We get a little more personal attention with them too. Sub Pop are a great label, but they put out a lot of bands. They were a great label for us to be on, because you get that stamp of approval, you get Sub Pop on your record. Some labels, you’re gonna listen no matter what band it is.

On the new record you seem to concentrate more on the overall sound – the moods and timbre – than before. Has the full band been more involved with the arrangements this time around?
PS: Well, that’s a good assessment and I’m glad you hear that, because it’s exactly the way you describe it. Zach did pretty much everything on the first record. He had some guest stars on there, Dominic being one of them.
DE: Very briefly!
PS: Very briefly, but still he was in there before any of us. The second record was us coming off the road. We had ten days between tours to record and then get out. Zach went and mixed it with Bill Racine and we had our record in a month. This time we had a chance to take our time with it. That gave us an opportunity to use a lot of different instrumentation and really spend time with it. In the grand scheme of things it still came together pretty quickly – a couple of months in total.

What’s next in the Rogue Wave diary?
PS: We get three days off then we’re going out for a month with Death Cab For Cutie in the States. Then we get a little bit of a break. We get to go home to our friends a go “hi, big kiss, bye”!

Asleep At Heaven’s Gate is out now and is reviewed here. Check out the band’s current touring plans, and hear songs, at their MySpace page.