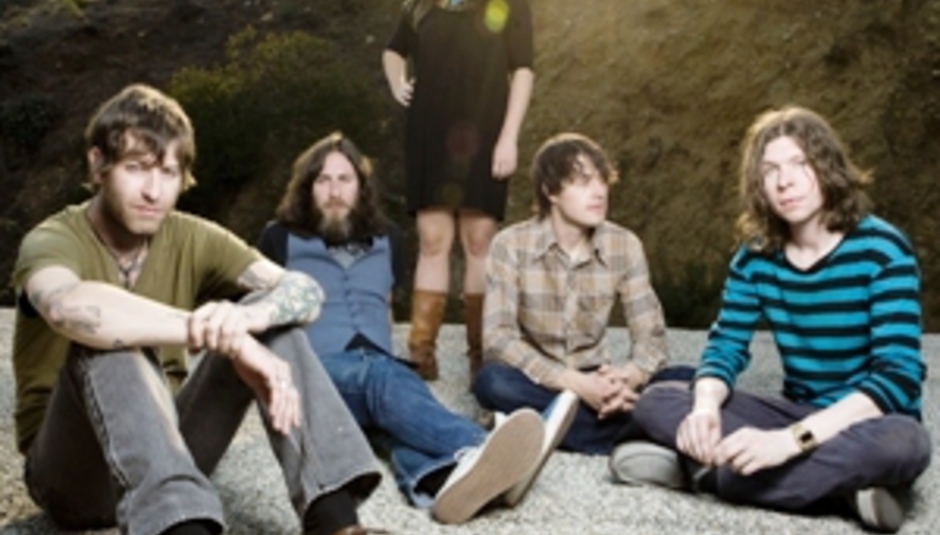 Vancouver, Canada five-piece Black Mountain are riding a wave of critical acclaim following the release of their second LP, In The Future, back in January (review).

Released via celebrated indie label Jagjagwuar, In The Future saw the Stephen McBean-fronted outfit develop the heady fuzz of their self-titled debut of 2005 into an alluringly psych-tinged long-player full of enchanting melodies creeping around heavy-amplified riffs and howl-along vocals. At times channelling the raw energy of Comets On Fire, at others the introspection of an act prioritising emotions over excessive volume, the album was always destined for high-scoring critiques.

DiS dropped in on the band’s journey between a sadly postponed Glasgow show – vocalist McBean was suffering from vocal problems – and a date in Leeds earlier this month for a chat with keyboardist Jeremy Schmidt. They’re on tour in Europe now and will return to the UK in the summer.

I hear Stephen’s not so well…
We had to cancel a couple of shows – we missed Dublin and we missed Glasgow.

But you were in Glasgow when Rangers were playing in the UEFA Cup Final – I guess that was made pretty obvious?
Their presence was definitely made known to us. There was definitely a lot of anticipation for the game, on the streets.

No doubt. How’re these set of dates going for you? You’ve not toured here properly for what feels like a while…
I guess this is the first time we’ve been out here since the record came out – we started this tour at the beginning of May in the Netherlands, and it’s basically just a club tour this one, with a couple of festivals along the way. We just did ATP, and we’re doing The Great Escape in Brighton. Most of the shows, though, are clubs and halls and stuff; when we come back in the summer we’ll be doing strictly festival shows. We’re doing Green Man, and I think we’re doing Glastonbury.

I take it you’ve not played Glastonbury before?
No, we’ve never played it before. From what I hear it either has really gorgeous weather or the site’s a total mudslide.

Something like that – do pack wellies. On these dates, though, are you finding things more comfortable than previous visits to our shores?
Well, we’re still touring in a van! We’ve done trips in a bus before, but that’s usually when we’re touring with another band or two – right now it’s a bit expensive for us to get a bus just for ourselves. We’re probably gonna have one for the festival tour, though, as when you’re doing those shows it’s rare you have your own space to reside in, except for at ATP of course where you have a chalet. But it’s expensive to tour in Europe for us anyway – just to come here costs a lot, and we’re still trying to tour on a budget.

D’ya think some people have the impression you’re a bigger band than you are, what with all the great reviews for the last LP?
I think that might be the case – that critical acclaim doesn’t necessarily translate into monetary affluence. Y’ever get to see the places you’re playing in? It’s pretty typical that bands simply see the inside of the van, then the venue, then the van…
We do try to see places, as obviously it feels like a waste to go to these locations you otherwise wouldn’t go to and not see the sites, to not look at anything other than the inside of a nightclub. But there’s rarely any time – we do have some time off once in a while. Yesterday, because we couldn’t play the show, a friend and I went to the art school in Glasgow. It’s the Charles Rennie Mackintosh building – it was really quite something, the building. It’s really weird, quite unlike anything else. It’s like this bohemian paradise in the middle of Glasgow.

Are there any home comforts you can’t be without while on tour?
I like a lot of ‘home comforts’ that are out here actually, as I’m something of an anglophile. When it comes to creature comforts for me, I like tea – when I order it here I don’t have to specify that I want hot tea, and I don’t struggle to find milk. I don’t have to specify black tea over herbal tea – when I order tea here I get what I want, with milk and sugar, breakfast tea or whatever. Another thing I like is Marmite, and that’s easy to come by here. You can’t get it too easily in Canada – it’s something of an export novelty. It costs a little more, too, so I intend to buy a large jar of it while I’m here to take home, as back there you can only get it in small jars.

Have you noticed, generally, that you’re attracting more people to your shows since the release of, and acclaim for, In The Future?
There’s definitely a larger audience at shows now. We played Manchester on a Monday night and the place was full, which was good. In Brussels we played this festival in the city, and we did ATP, and those shows are hard to judge. But I have a feeling that… well, the pre-sales for the shows we’ve had to cancel were pretty good. Glasgow would have been a sold-out show, at Stereo. So I think the turnout will be pretty good for most of Europe; it’s been good in the past but I think it’ll be even better now with the new record being out.

Get the sense this is ‘your year’, to make things happen for the band? With the great press behind you, growing audiences…
Yeah, maybe – we don’t really think about it that much. I guess it’s hard to be objective when you’re thick in the logistics of it all. Every day we’re thinking about if there’s going to be a nice shower at the hotel, and if the venue’s going to be anywhere near where we’re staying, you know, those kinds of things. It is nice to think that, yeah maybe after this record we’ll be able to tour comfortably and have a sort of audience we can rely on, but we don’t anticipate one or the other, we just go with the flow and keep doing our thing.

How was your ATP experience this time around, having played it a few times before?
It was good – I saw Harmonia, they were great, and Howlin’ Rain too. What I like about ATP is that they really mix it up – bands together that you otherwise wouldn’t see, together. Would I like to curate one? Oh yeah, I’d love to, but it’d be so hard to decide on anything. We’d probably have a long list of all these bands, one from everybody, and they’d all be different. I imagine a lot of it gets whittled down to who is available – your dream list gets shortened pretty quickly. But that’d definitely be a fun thing to do, to curate a festival like ATP.

Visit Black Mountain’s MySpace page HERE for details of their forthcoming shows in Europe. The band’s new single ‘Stormy High’, taken from In The Future, is out now and is reviewed HERE. Please try not to visualise that erection.