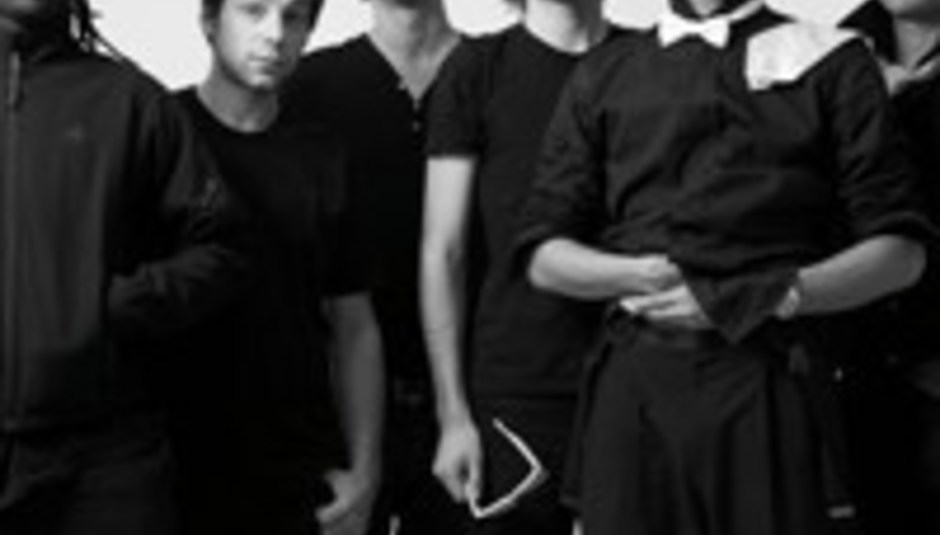 Armed Forces: on the gallows with Islands

Armed Forces: on the gallows with Islands

There’s a moment in the new Islands record - not any specific moment, but you’ll know it when it arrives - where your frantically overworked senses start to lull and you begin to zone out completely. Arm’s Way is brim full of all the myriad clever-dick touches we’ve come to expect from Islands off the back of their first release, Return To The Sea, but it’s like a lungful of water in a wave machine, a rock-operatic smorgasbord of crashes and thuddingly portentous crescendos. Welcome to the new prog: it’s a little like over-lit pornography.

Of course, you might not choose to see it that way – our own review pages thought it “astonishing” and focused, among others – but even its most ardent of advocates would be hard pressed to deny it’s an everything-and-the-kitchen-sink job (frontman Nick Thorburn prefers to think about it as music for “an age of bloated excess”, though I’m not sure that constitutes much of a defence). It’s also, as our aforementioned reviewer already noted, overwhelmingly dark – a healthy dose of morbidity has always been key to the band’s messy self-absorption, of course, but here we touch on hitherto-unscaled paranoid heights in proliferating images of murder and mutilations both real and imagined, culminating in the ‘psychedelic death’ of the condemned man’s journey to the gallows as depicted in ‘Vertigo (If It’s A Crime)’’s instrumental finale.

Perhaps not so surprising, given the album’s backstory of shady label to-ings and fro-ings in the US and, in particular, drummer and co-founding member Jaimie Thompson’s acrimonious departure from the group back in 2006: DiS attempted to unravel the whole mess in a pub at a Notting Hill boozer last month...

I remember reading somewhere Arm’s Way was originally intended as a pop record but the way it’s ended up it’s more overwhelmingly rock – what happened there?
We started out with a pop direction and ended up veering away from that at a certain point in the writing and arrangements, I don’t know if it was a conscious thing but there was a lot of lighter music that’s been put on the back burner for the moment, they might end up on a future album or they might end up as B-sides. I’d say some of the older numbers we had became less relevant, and we swapped them for songs which happened to be louder and punchier.

A lot of your stuff has always had that preoccupation with death but it’s even more evident on this record; the final track (‘Vertigo (If It’s A Crime)’), especially, is a resoundingly pessimistic note to end the album with...
Yeah, that’s definitely the darkest part of the record. The last part of that song really represents a psychedelic death, you know the moment when you leave the physical world, what feels like an eternity is really just a moment... just speculation really... There was this experiment with this guy who was getting beheaded and he told his friend he would blink after his head had been chopped off to see how much longer after the event he’d be alive for... But there’s two themes on the record I think, there’s the really dark, death-type theme and then there’s the inspirational songs like ‘Life In Jail’, songs that are really just trying to wake you up. A lot of the album is this introspective, existential thing... looking inward and outward at the same time.

There’s also a song (‘Pieces Of You’) on there about a bunch of local kids that killed a fisherman back in your hometown – apparently you (Nick) had been friends with one of them at high school?
Yeah, we bonded over being lousy basketball players while sitting on the bench, then one day he stole my watch and I asked him about it and he threatened to hurt me if I kept asking about it, then later admitted he’d done it but made no attempt to return it. Months later he’d been arrested on suspicion of murder... It was weird but, you know, I was a really young kid.

Yeah... sorry to dwell on the morbid stuff.
Well you know, that’s all we do!

What are the ‘arms’ of the title and lead track (‘The Arm’) actually about then – they seem quite an ambiguous image in the first song...
Yeah, I think it’s something that starts out with good intentions but ultimately is something else that is harmful in some way. I just like the imagery of arms; it can be both ominous or cruel, something that could be there to help you or be part of a military faction. But ‘The Arm’ is like the centrepiece of the record I think; it was definitely the turning point in the band’s sound. I think there was a real shift in what we were doing. We’d spent two months on the road in Europe and Aaron had just joined the band and Jaime had just left, and we came back and sunk our teeth into new material and something gelled, I dunno what it was, just a way of working together I guess.

Has the line-up change altered the recording process for you a lot?
I think one thing that was different with this record for sure was that the first one was made in the studio before a lot of these musicians had joined the band whereas it was very much the other way around this time, the music was all written and finished before we went in. I think that made a big difference in terms of what came out. There was a lot more deliberation in terms of arrangement, we took a lot of time with the songs.

I heard you had a lot of backlogged material, was it all considered for the record or was it always intended separately?
When we went into record we knew exactly which songs we wanted for the album. There are still a dozen songs which are in the ether, and then I’ve got about 25 songs that are just percolating right now. It’s hard to say whether those’ll end up as Islands songs or not at this early stage.

And the new songs, can we expect to hear anything on them soon?
Well we always seem to be one stop ahead of ourselves, on the last tour we did in the US we were playing songs off this record and that was almost two years ago, so you know we’re already sick of these songs (laughs), and the record still has three months.

So you’re pretty tight on the ‘old new’ stuff then?
We have varying degrees of tightness. It’s like an asshole that contracts and expands when shit’s coming out of it. So shit’s coming out of it now, it loosens up when shit comes out and we haven’t been doing shit for a while. But shit’s definitely getting tighter. It’s not diarrhoea, but there’s corn in it.

Lovely stuff. I’d also heard it was partly recorded in a studio where Elvis recorded his first release, is that right?
Not exactly, they had these things that are shaped like phonebooths, I don’t know what they’re called but they have lathes in them and what people would do in the fifties would be to put in a buck or two and record a song with their guitars or whatever, and they spit out a little 45. They had one in the studio, I don’t know why, but allegedly Elvis made his first record with it. He made it on top of the Empire State building I think...

Thanks for clearing that up. Is it true that you performed strange rituals during recording to ward off evil spirits?
That’d be Ryan, our producer. He’s a really big Joe Meek fan and he was really into the occult.Ryane just gets his mojo rising you know, puts salt on the windowsills, lights a few candles... It’s just mysticism, you know, but music’s full of stuff like that, it’s full of legends, so I like playing into it.

Arm’s Way is available on Rough Trade from Monday (May 19); have a sniff round the MySpace ‘til then, or try going through official channels if you’re more a by-the-book kind of a person, here.