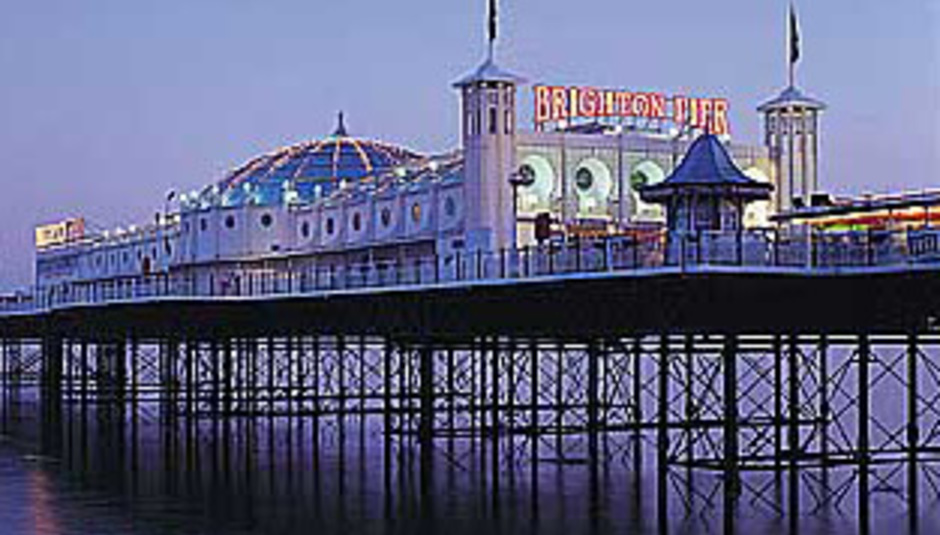 The Great Escape 2008: the DiS preview

The Great Escape 2008: the DiS preview

Look! It’s Wednesday! Which means tomorrow is Thursday and, more pertinently, Thursday May 15, which means… it’s time for The Great Escape.

Over 200 bands from home and abroad are to converge on Brighton for the annual three-dayer, running from tomorrow ‘til Saturday (May 17). Every day a number of venues will play host to bills that vary between aiit and amazing. Our pretty little lot certainly falls into the latter category: before we get into our top picks for the festival, do again cast your eyes over what we’ve up our sleeves, hitting the stage at Digital (189-192 Kings Road Arches) over three nights. Let’s Wrestle
“Let’s wrestle, let’s fucking wrestle,” sing Let’s Wrestle on ‘Let’s Wrestle’, their forthcoming Quo-on-poppers anthem released through Stolen Records. But rest assured the casually brilliant lo-fi punks will have more to say besides as their tales of mild boredom and mass murder hits Brighton seafront this weekend. Their indolent brand of absurdism could quite easily teeter over into lame buffoonery but as long as they’re writing songs as good as ‘I Won’t Lie To You’ Let’s Wrestle remain a loveable prospect indeed. AD School Of Language
After grappling for a short spell with the rigorous complexities of his increasingly spliced-up chamber pop on his lonesome, ex-Field Music maestro David Brewis has managed to get a band together to show off his newly-minted School Of Language project in all its multi-faceted splendour. Though retaining an essential rock crunch, Sea From Shore succeeds in burying the ‘poppy post-punk’ tags of yore and breaks into a freer territory inhabited by the likes of Dirty Projectors. AD No Age
Following on from Weirdo Rippers’ washed-up fervour was never going to be an easy task, but No Age’s Sub Pop debut Nouns managed it with typically effortless aplomb; ramping up the shoegaze elements of their sound into a gorgeous sheen and cranking out some of the best good-vibes punk of their careers to date. The record should see them blasted clean out of hipster waters and into ever-more conspicuous arenas – hence the Uncut stage, one might suppose. Expect even more radiant noise with the live show. AD Gentle Friendly
Gentle Friendly are at this stage more of a raw booster than a sure-fire proposition – the tracks DiS has dug from MySpace and ‘blog drift marking them out as cohorts in the quest for a more exotic London, drum-led, kiss-chasing with the likes of Abe Vigoda, No Age, Fuck Buttons. All the good stuff, then – word is they're holding better stuff close to their chest, so get set for a sweaty release of awesome this weekend, rusty love bubbling up in animal howls and box-busting rhythmic glee. KK Telepathe
Again, Telepathe are a band that could go either way – but that’s what events like the Great Escape are for, allowing you to roll the dice on untried, untested new acts in between promenade wanders and alleyway drinking. DiS is placing its trust in the Brooklyn quartet and in particular their stunning, soaring single ‘Chrome’s On It’. Serious, it ties us in knots. Earlier EP Farewell Forest led the way out from a more droning disposition into the “dance riot” Telepathe crave. Join us at Digital Saturday to see if it transpires. KK Times New Viking
Anyone with eyes on the Columbus trio at last weekend’s Pitchfork ATP will already be incredibly aware of what Times New Viking do. Impossible to ignore, they’re a band that shout in your ear while tickling the sweat in your armpit, a storm of guitar noise bullying fantastic indie-pop songs out from the ether in the time-honoured manner of The Hunches and The Hospitals (but less loud); Yo La Tengo and The Kingsmen (‘cept more loud). Get lost in the straining-leash funk of their fuzz, twisting, caught bodies scattered in a wave of guitar and holler, ankles behind ears. KK Lovvers
Nottinghamish quartet Lovvers have been turning industry heads for a good year now with their wildly raucous live performances, where crowd interaction is the name of the game as vocalist Shaun is more than likely to be up in your front-row face by the second song. Expect: flailing limbs, sweaty locks, smiling faces. Underestimate: not, the band’s perhaps limited palette when compared to other acts participating at The Great Escape, for the foursome channel an immense energy that so very few of their festival comrades can muster. Rumour has it they’ve an EP forthcoming through a very high-profile indie indeed, so catch them before the industry gears grind them down to tour-shattered dust. Cadence Weapon
Edmonton-based emcee Cadence Weapon, real name Rollie Pemberton, has been much admired by DiS staffers since the release of his Breaking Kayfabe debut, given an official domestic release in ‘06 via Big Dada following its stateside issuing a year earlier. It paved the way for this year’s engrossing, mesmerising, damn fantastic Afterparty Babies, an LP that dares to push hip-hop to new levels by mixing tongue-twisting wordplay straight out of the most poetic diary your sister’s never written with almost-rave beats and retro 8-bit FX – on paper hot air, but absolutely riveting on record. Live, it’s just Pemberton and his DJ, Weezl. Low frills, maximum thrills. Be there. The Mae Shi
If you missed LA’s The Mae Shi on their DiS tour with Johnny Foreigner and The Lionheart Brothers – dates wrapped up, literally (if you were there, y’get me), last night at KCLSU, London – please please please make the effort to catch the six… five… four-piece (in this current touring incarnation) and their hyperactive hardcore-gone-G.A.Y.-pop campfire sing-along tomfoolery, with props and attendee fondling and instrument swapping and fire… Okay, there’s no fire. Yet. There might be in Brighton. The band’s recent HLLLYH is a frenzied listen and no mistake; live, they up this established ante considerably. If you’re coming to The Great Escape to party, make partying with these dudes a priority. Eugene McGuinness
He’s opening DiS’s involvement at The Great Escape tomorrow early evening, and we couldn’t be happier: Eugene McGuinness is one of the most naturally gifted songwriters this country can call its own at present, and his career hasn’t even properly broken free of the blocks yet. To say the man’s got potential is a no-brainer; what’s additionally wonderful is that his first mini-album, The Early Learnings Of…, is a must-have for fans of singers with their own voice, expressing emotions in a way that’s free of cliché. To have such a great debut in your canon already can’t be a bad thing, and it’s not even the debut album proper, clocking in at just seven tracks long. Expect selections from it and newer material in his set for DiS, comprising a perfect start to 2008’s festival in our opinion.

The full list of participating acts, and details of other attractions, can be found at the official Great Escape website. Check the times/stages on DiS by following these handy links: