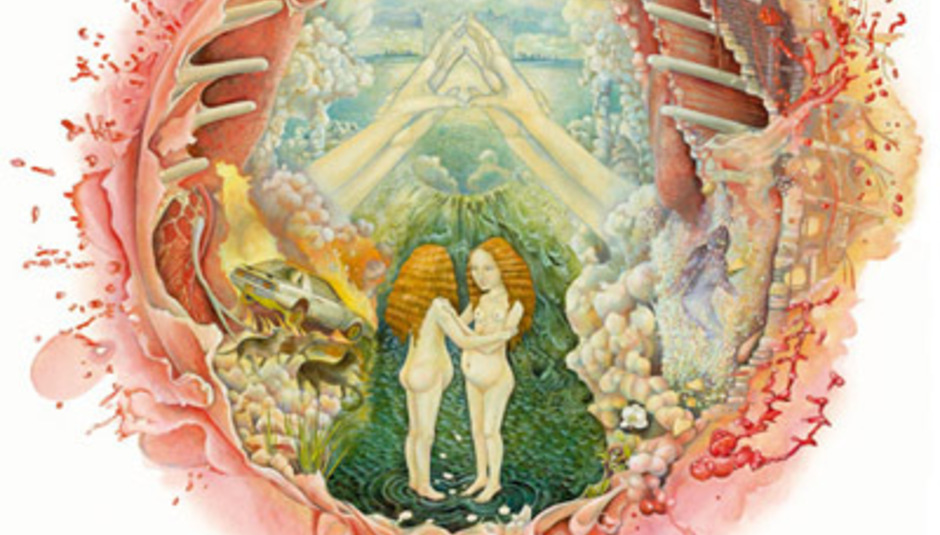 Sprawling Canadian indie-poppers Islands are back with second album Arm's Way next month (artwork pictured), their first since co-founding member Jamie Thompson's departure in 2006 left the band's future looking decidedly precarious, and it's dark, proggy and frankly a heck of a lot to get your head around on first sitting. Lucky the band are on hand to give us the guided tour with their nifty track-by-track analysis.

'The Arm' – The cool thing about the song in relationship to England is we got a flat tyre outside London about a year ago, there was this huge thunderstorm and we were at the side of the road for a long time, it was terrible. The rain let up and I just grabbed an acoustic and went into the woods nearby. It was all contingency, and that seems to be how it is with this band. It was a nice symbolic beginning for the new line-up.

'Pieces Of You' – It was kind of a joke to name it after a Jewel song. I was hoping it would be a real pop smash. I knew it was such a trite phrase but this is more literal, you know, like actual pieces of a person. We knew one band in Canada who went to their record label with some songs and they said “We’re not hearing any ringtones”, so they had to re-record. I guess we’re blessed ‘cause we just naturally make ringtones. We think there’s kind of an Abba and Stevie Wonder vibe about this one.

'J’aime Vous Voir Quitter' – It was written about a certain someone. It was really a reaction to being stabbed in the guts. That was kind of a bitter affair, at the last show we did with Jaime Nick played that during the soundcheck and then walked off the stage.

'Abominable Snow' – This song just didn’t seem to fit on the last record, it was sort of more gentle.

'Creeper' – That’s like the same thing as 'J'aime...' but about our record label. People can figure it out from there, it wasn’t a good time for us. There’s a drum machine on it, a real four-on-the-floor moment. It was a conscious decision to make a stupid song so stupid people can get behind us. Well, stupid and smart people. It started out really skeletal with the Michael Jackson guitar line, and then it just built up from there. 'Kids Don’t Know Shit' – The song title’s facetious, I think. It was another turning point for the band – we were worn out after a tour and didn’t have a lot of money so the promoter put us up in Normandy at his beach house. It was great recuperation time for the band, like a gestation period for the band’s new exterior.

'Life In Jail' – It’s a self-help song, lyrically just inspirational. We were playing this song, ‘Pieces Of You’ and ‘I Feel Evil Creeping In’ months before the first record came out. ‘Kids…’ and ‘Life in Jail’ feel like companion pieces in a way.

'In The Rushes' – That was a cool one, it came together really nicely. It was the band flexing its muscle and showing off if you like, the first time we got a little proggy.

'We Swim' – It’s partly a philosophical lyrical thing. Partly inspired by things in England, it’s kind of observational. Abstract, almost. There are some trite concepts in there that I maybe wouldn’t use if I was writing it again but I guess I was trying on an old hat to see what it looked like.

'To A Bond' – I like the way the last three minutes just erupt on that one, it’s like a Velvet Underground jam or whatever.

'I Feel Evil Creeping In' – It’s just a classic bad boy rock ‘n’ roll song. It was never meant to sound like an anthem, it started as an old song which we decided to scale back.

'Vertigo (If It’s A Crime)' – It’s definitely the darkest part of the record. I felt the whole thing was really visual, maybe it’s not explicit but the narrative in the first third of the song is the person pleading their case, explaining to someone the bad verdict they received at a trial, and the second part is the execution playing out - walking to the gallows, the rope being tied to the neck and so on, then the last section is like a minimal, Steve Reich thing, which represents the kind of psychedelic death, the moment when you leave the physical world.

Arm's Way is out from May 19 on Rough Trade. You can check out some of the tracks from the album on the band's MySpace, here. Get the full story on the record in DiS's forthcoming interview; we'll also be telling you what to think about it (japes!) in handy review format some time in the very near future.