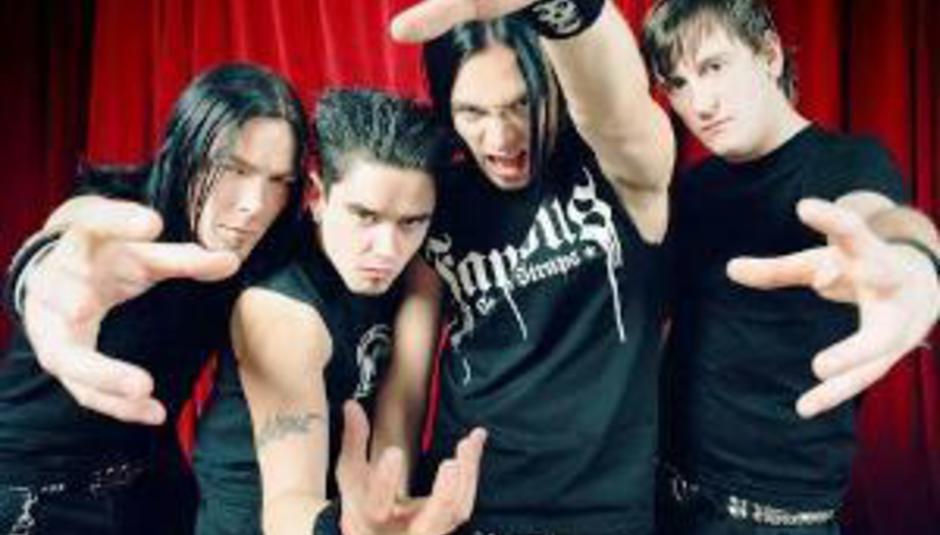 DiSband #6: Bullet For My Valentine

DiSband #6: Bullet For My Valentine

Bullet For My Valentine originally formed in 1998 under the guise of Jeff Killed John, and proceeded to play cover versions of Nirvana and Metallica in and around their hometown of Bridgend, Wales. The four-piece – Mike ‘Padge’ Padget (guitar), Matt Tuck (vocals, guitar), Michael ‘Moose’ Thomas (drums) and Jason James (bass) – soon began writing their own material, and changed their name in 2002 after attracting label interest.

The band’s hugely successful debut, The Poison (review), was released in 2005, selling in its hundreds of thousands. The record has since been re-released with various bonus content a number of times. Its follow-up, Scream Aim Fire (review), was released earlier this year to a mixed critical reception, some writers highly vocal about the band’s cliché-riddled heavy rock, seeped in traditional metal twists and lacking any shred of creativity (despite its most excellent shredding). DiS certainly didn’t trip over its faint praise, stating “where you would have liked them to open a few new doors in the search to find a sound that was distinctly their own, they appear to have just piled on more Maiden, more Metallica, more Slayer, and a dash of Slipknot drumming”.

Not that the band’s thousands of fans worldwide cared much for what critics had to say; Scream Aim Fire reached number five on the UK albums chart, and number four in the US and Australia; it reached the top spot in Japan, too. They’ve over 15 million – that’s 15 million – MySpace page views. That: wow.

So why DiSband? We don’t wholly understand the appeal, that’s why. Padge kindly fills DiS in on why his band is so very, very popular.

You started out as a covers band - do you think this grounding has had an impression on the music you play now, as it's quite resolutely in the vein of metal acts that've come before you?
Every musician has influences; fortunately for us ours were classic metal bands. I don’t think playing covers had an impression, really. It’s just the music we love and have grown up with, so that’s what comes out when writing our own material.

The name Bullet For My Valentine was arrived at in 2002 - it seems fairly 'emo' for want of a better way of describing it. Does the name leave any listeners expecting something a little softer, do you think?

Our band had just got signed, so we needed a better band name than the one we were using (Jeff Killed John), which was pretty crap! We just wrote a bunch of names on some paper and Moose came up with Violence For My Valentine, and we just changed the first word. It just fitted with what we were doing at that time, and kinda fitted the lyrics. We didn't even consider if we were emo, or if that name was emo. It’s just a band name. We liked it! I don’t think people expect anything lighter than what we do; we are all about mixing it up, heavy and mellow.

Do you regard it as a potentially 'classic' name at all, a la metal acts past: Metallica, Black Sabbath, Slayer, Iron Maiden... all defiantly classic, no?
I don't regard the name as 'classic', but did past acts consider their name classic until they became classic?

Are you so bold as to think Bullet can be categorised alongside said acts, if not now then eventually? In terms of output, that is - do you think your records possess the necessary longevity? Would you agree that they're not in keeping with modern fashions/trends, so in that respect they will have a longer shelf life?
Maybe, in time. All we can do is hope for a long career out of this. We want a long career; however, with the state of the music scene today and how fast trends and genres come and go, who knows? I believe we put our heart and soul into the records, we tour the ass out of them and we are just a hard-working band building our army.

You've enjoyed success stateside, commercially, breaking the Billboard top ten with your latest album - do you find metal fans any different there to the ones that you find in Britain? Can you spot a metaller from afar, regardless of their dress or hair... something about the crick in the neck...?
You will always get the standard metal fan: long hair, black t-shirt, jeans or combat shorts, goatee beard et cetera. But as for a difference, not really. Everyone who comes to a show just wants to rock and have fun really, wherever you are in the world.

A number of versions of The Poison were released - was this solely with thoughts of newcomers in mind, or were you also interested to see if you could 're-sell' the same record to existing owners? Be honest now! As I'm assuming these revised/repackaged versions were the label's idea primarily, were you entirely happy with every decision made?
It's a label thing really, because of the internet and record sales going down usually there is a campaign to re-release, so that attention to the band and their album keeps going. I believe it’s great for the existing fans, because they get bonus materiel. It’s good for sales of the record and it does attract new fans. It’s all positive man, of course we were happy to re-release.

How do you find coming home, now you're globetrotters? Is there any resentment in Bridgend - old friends/bands who've not been kind to you since your breaking though?
It’s always good to come home, especially after long tours. It does get difficult at times ‘cause we are humans with homes, bills and lives. I wouldn’t say there is resentment here, as most people are really supportive of us.

How have you dealt with critical negativity - does it trouble you at all if a writer, especially one who knows their stuff, gives your record a poor write-up?
Regarding negativity, I mostly find this on the internet, on forums and comments boards. But I’ve learned to laugh it off. We did have a bad write-up from Kerrang! magazine which we were totally gutted about, because they had always been very supportive of Bullet. Who knows why (they published the review)? I wouldn’t say it worried us, but we were let down a little.

Does it bother you that you're not regarded as especially original?
No.

Making comments during the 2006 Rob Zombie tour (details) saw you removed from it - does that experience mean that you never take your own support acts for granted, and treat them with respect? Do you worry when/if you catch yourself exhibiting 'rock star' behaviour? Would you say you felt like 'rock stars' in a traditional sense, or merely jobbing musicians who've established a fanbase?
We just play music, drink beer and have a good time. We take care of our support bands, and always have. The trouble with the 'rock star' tag these days is that nothing is traditional or original; it’s all been done in some way or another. To be original is very difficult. People try, but they try too hard.

Do you think your music videos mostly play up to established rock clichés - the muddle of performance shots and a semi-realised narrative involving some pretty girl, etc...? Is this knowingly done - after all, a band's gotta get their music on TV as much as they do radio - or do you take a backseat on shoots and ultimately leave the matter in the hands of the chosen director?
I take a back seat. I’m really not that bothered about videos.

Are you interested, at all, in developing your present sound into something truly identifiable as Bullet For My Valentine on album three? Do you think a shift, however slight, would alienate your fans? How does the band keep the songs feeling fresh when you must play them hundreds of times per year?
I believe we have our sound already. You can never please everybody, as even a slight change will stir up a lot of people. We learned this on our new album, Scream Aim Fire. The trouble is that nobody wants to write the same record over and over again, it would get really boring and repetitive. I wouldn’t want to drastically change our sound between records – that wouldn’t make sense – but a slight change or tweak is just interesting and fresh.

Bullet For My Valentine’s Scream Aim Fire album and ‘Hearts Burst Into Fire’ single are available now, with their new single ‘Waking The Demon’ released on June 16. The band play the following live shows in the UK and Ireland (full dates available at MySpace).

Previous DiSband features:
#5 The Subways
#4 The Hives
#3 The Horrors
#2 Land of Talk
#1 Hadouken!