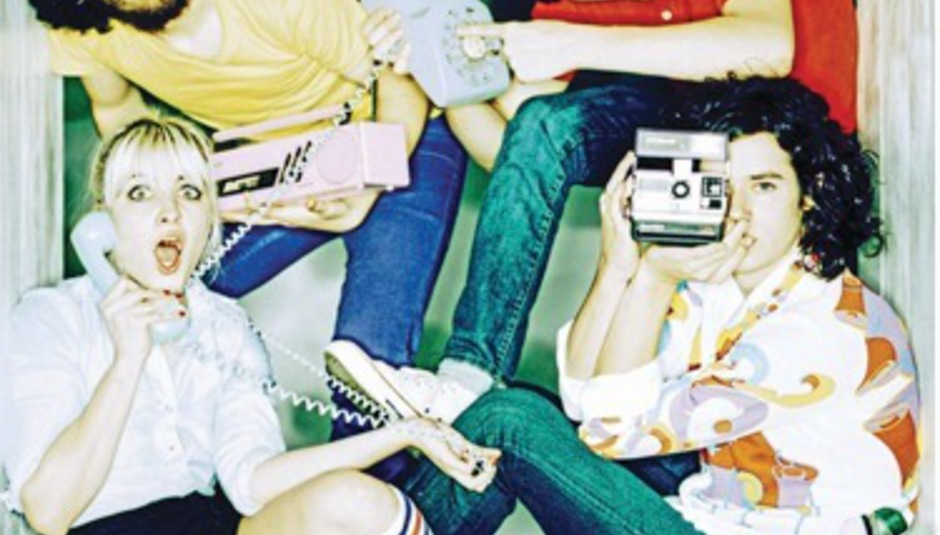 Brats on the beat: talking to Be Your Own Pet

Brats on the beat: talking to Be Your Own Pet

Be Your Own Pet's second album, Get Awkward (review), was released through XL last Monday (17 Mar). DrownedinSound caught up with guitarist Jonas Stein on the day the band landed in England to begin their latest tour of our fair isle.

An “ill, tired, jetlagged, hungover”, Jonas talked from the safety of his band's van as they sped along a couple of hours before an inshop show at Banquet Records in Kingston, Surrey. After that, they'd go on to see an evening show descend into a foodfight over east on Kingsland Road and, DiS imagines, further punish Stein and that hangover of his. Under such circumstances, it's probably best just to dive straight in.

What do you think’s changed on the second record – obviously the first one, it’s been described as ‘raw’ and ‘youthful’ – I know Get Awkward’s been pitched as a more mature record but to me it just sounds like an extension of the first?
Jonas Stein: Personally I just think it’s an overall better record – I think we’re better songwriters now. I think with the first one you can tell that we’re younger in it. I think regardless of the humorous, high school-esque lyrics and stuff you can hear a maturation in the band. I think it’s better put-together, we put more time into it and we knew what we wanted to do with it and didn’t have to get used to being in the studio. With the first record there were three weeks blocked out for recording and at first I was kind of rebellious in that I didn’t think we needed to spend that much time or money. But after, I realised it was crucial to have that time to work on your shit.

Also, our relationship with our producer has developed since the first record, now we’re totally comfortable with him. It’s Steven McDonald, who um…

They’re a great band… was it you that approached him or did he come to you?
JS: My first memories of him are this tall, lanky, really goofy dude with a whiny voice coming up and just talking to us. He was really non-threatening and easy to get along with, and fun to talk to. We ran into him a few times and the subject came up of having a producer and out of everyone we met, we related to him the most, regardless of what he’d done in the past.

Did you know about Red Cross before he approached you?
JS: I hadn’t really explored their back catalogue by any means but I knew it was a good band and I knew a couple of songs. Someone that was in that cool a band and is so down to earth, it’s just a really big plus.

You talked about a maturation and the high-school lyrics – are there any plans to grow up, or slow down at all? Do you have any idea where you might be in five or ten years or are just not thinking about that right now?
JS: I’m not really thinking about it in that way, but when I do start to think about age I realise how much of a jump start we have on everyone. A lot of our friends are older than us and they still seem very youthful so I’m just looking forward to the fact that I have a lot of years left in which to be youthful and productive. I’m just kind of riding the wave, going with the flow – I think we’re all going to continue making music as a band and with other people as well. I just don’t want to get bored. I don’t see that happening anytime soon. At some point I’d like to take several months out of the year to go travelling. In five years I’d like to be at a place in our career where we can dictate our schedules a bit more and get a lot of the hard stressful work over with in the first few years and be able to spend more time having lives. I just want to have more time to pursue other interests such as travelling. I want to plan out a very long motorcycle adventure…

What, in South America or somewhere else?
JS: Yeah, I’d like to go from my hometown in Nashville through Mexico down into Central America and Costa Rica. I’d like to do it with a couple of friends and just lose ourselves on the road.

If you speak to most bands, they’re very locked into a career and very single-minded, but I guess what you’re talking about is just taking a break and feeling that life isn’t just being in a band.
JS: Yeah, I want to tour and be consistently successful but have the time to do other things. I want to have time to explore the whole different areas of life. I’d like to go to India, in particular – I’ve heard great, life-changing things about that place. Just ‘cause it’s one of the oldest countries or civilizations in the world. It seems like a very spiritual place, which I’m interested in.

So what – you’re on the way to Kingston now? You must be so bored of the UK, you’ve been here a fair few times already.
JS: It’s always great to come back here and play shows. The fans are great and there’s just such a good market for our type of rock. Maybe another thing about the future is that we’ll be at a big enough point in our career so that we can have that fanbase all over the world and we can play shows in other countries that wouldn’t normally be on the wrap sheet.

Where have you felt most out of place so far?
JS: One place that kind of sticks out in my head in a kind of negative way is Brussels in Belgium. I’m very weather-sensitive and the weather was overcast so I felt shitty. I got hassled by some local kids too, when I was walking around by myself. I just felt very unaccepted there. Does that affect the performance at all though? Does it make you more fiery?
JS: I dunno, I guess that’s when you get to disconnect and feel like you can distance yourself from your surroundings a bit more. I can’t really talk too much shit coming from the United States of America which probably has one of the worst reputations of all the countries in the world, at least in terms of leadership.

Yeah but you can’t blame Be Your Own Pet for that can you? You either take to a place or you don’t I suppose. What’s Nashville like?
JS: It’s really hot in the summer, it’s pretty cold in the winter. It’s not a huge city by any means, but it’s still big enough to get lost and have adventures in. It’s not one of those towns where you start getting really bored, getting home-town fever and start smoking crack to keep yourself alive. For how moderate it is, it’s very hip and exciting right now. I don’t really like using that word, hip…

Yeah, there aren’t many words you can use to mean ‘good’ that aren’t embarrassing any more… are there any bands around Nashville that you grew up with? Was there a scene as such or were you out there on your own?
JS: Yeah, the scene that I grew up with were mostly out-of-town bands coming through this one place, Guido’s Pizza. It was an all-ages pizza place that used to put on shows in this little back-room. Pretty much everyone could play there, but at that point in my life there was a really good hardcore scene there. DIY hardcore bands. These awesome bands came through with small numbers of dedicated fans and we were the youngest ones there, 13, 14, 15 and we used to hang around with people in their mid-to-late 20s, early 30s. So we were exposed to this hardcore party environment ‘cause they would still sell beer there, everyone would get shit-faced except for the kids. It’d be us getting in the mosh-pit with these 30-year-old dudes. I think that was very important ‘cause at that age you’re very impressionable and we were lucky to be exposed to that and the four of us understood and bonded with that type of music. I think you can hear the influence from Guido’s Pizza still in there today.

I was gonna ask as well – you mentioned the hardcore scene, but a lot of what you might term as ‘indie kids’ are into you as well. Would you say you identify more with that side of it or is it back to the Guido’s pizza, punk fans crowd?
JS: Oh, definitely the punk fans. I was never really into like Pavement or… I don’t really know where to start with all those bands but we’re definitely more into the punk and hardcore stuff.

That’s interesting ‘cause I saw that you recently told Pitchfork that you’d been influenced by Animal Collective and The Kinks on your new record. Do you think that influence has made it into the new album, or…
JS: The Kinks are just one of my fucking favourite older rock bands. The sound is so warm but there are these dark lyrics. The reason I’m so big on and respectful of Animal Collective is because they’ve found a way to make some of the craziest fucking music ever but maintain a poppy aspect and that’s why they have eight or nine albums and thousands and thousands of fans. The general population would probably not approve of that band – a lot of people in America aren’t too caught up in music, but they’ve got to the point now where they can play sizeable venues. There are so many bands that will try to do something so different and it turns out sounding like someone taking a shit, but Animal Collective do it so you can listen to them and have a freak out moment one second and then be blissful the next.

Yeah, completely – another thing that strikes me about Animal Collective is that they’ve found this way of staying youthful, when they play music at least – is that an aim that Be Your Own Pet might have for the future, in terms of keeping that excitement there?
JS: Yeah, it’s fun to listen to and it’s kind of childish and it’s kind of about using the inner child and imagination and I relate to that. ‘Cause we are still pretty young and we don’t want to take ourselves too seriously. I want to remain youthful for a long time and I think those guys have done a good job at it.

The remaining dates of Be Your Own Pet's UK tour read like this: