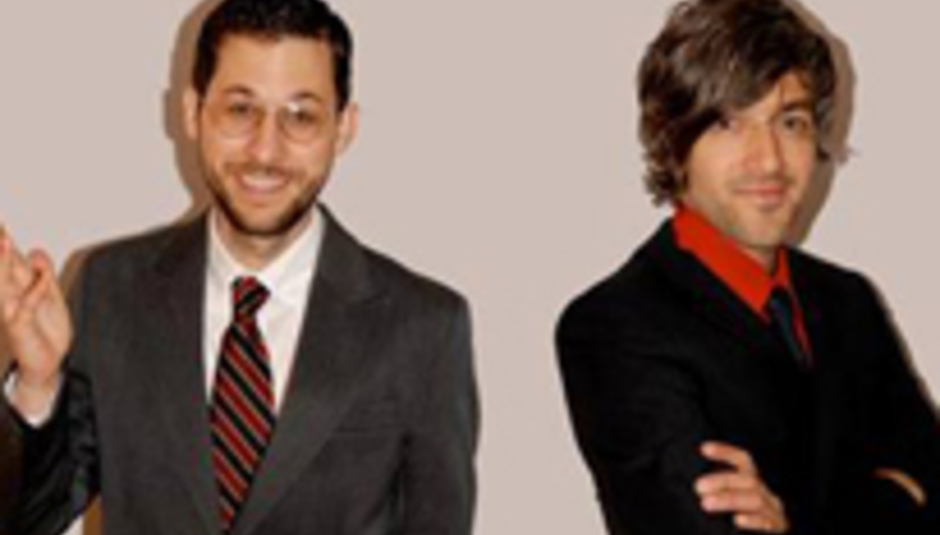 Brain Trust: We Are Scientists embrace band-life a second time around

Brain Trust: We Are Scientists embrace band-life a second time around

“You’re right,” says Chris Cain, one half of We Are Scientists. “Rocky IV is better than Raging Bull. Thank you.”

How we got to this point, DiS is still unsure, but we’re certainly not the first intrepid writer to be singularly swayed off the topic of anything remotely sensible by the non-linear minds and distinctly dawdling humour of the band.

Following two long years of touring in support of their notably well-selling debut With Love and Squalor, the band are back, newly shorn of a drummer but also now adorned by enough variation and fresh ideas on their new LP Brain Thrust Mastery to suggest that behind the wry smiles and sharper-than-knives quips lies a band in for the long haul, and shockingly, quite serious about their career.

“After the last tour, we felt like a good, beat-up dog,” confides guitarist and singer Keith Murray. “Still healthy and everything, but importantly we had been reduced on the chain of species by hundreds of thousands of years.” Despite this, from the wrapping up of their long tour sequence in support of their first record to a tentative live return last autumn, the band only disappeared from view for six months. “Initially it was a fear of losing momentum,” Keith admits. “Right when we stopped, I’d have loved to have had six months off. Initially there was general career terror, but we knew we needed to do something else [song-wise].”

“We knew we wanted to broaden [ourselves],” he continues. “We didn’t want to make the same record, a genre-specific album like the last one. We didn’t do much talking about what sort of songs we wanted to write though. The last album was written over the course of two years, and this one was written in about three or four months. When you write a song in one style one day, you’re super conscious of writing a song in a similar style the next.”

You would also assume, after flogging yourself to death for that period of time playing the same 12 songs, you’d be pretty stoked about writing and recording some new ones. “Yeah, playing the songs from our record for the last two years really... satisfied our appetite for those tracks," offers Keith, weariness apparent in his voice and with more than a touch of sarcasm. “We were perfectly sated by our wonderful genre-specific first album.”

‘Genre-specific’ were in fact DiS’s words, used as we discussed the differences between With Love and Squalor and the new record. In Brain Thrust Mastery, you can find everything from the usual WAS indie anthems (the single ‘After Hours’, ‘Ghouls’) to mega-pop productions like ‘Impatience’ and, oddly, Sade-esque ‘80s balladry in ‘Lethal Enforcer’ - DiS is looking forward to the video for that one. Many of the tracks sound bigger, more evolved, and certainly like more work for a singular guitarist. This is why the band has added a second six-stringer as well as a replacement for erstwhile sticksman Michael Tapper. “I think we realised that there was no good way to pull these songs off with three guys,” Keith agrees, then adding with a smile: “The best contribution the record’s producer made to the band was introducing us to the new players that we have.” The exit of Tapper was deemed to be, as usual, a mutual and amicable decision. However, it does appear to be so. Was Michael tired of the lifestyle, DiS asks.

Demands are indeed big - do you look at a 12-month schedule and say shit? “We do accept the whole thing,” says the hitherto quiet Chris, “but we look at the schedule and go ‘ARGH’. If we didn’t have girlfriends and family, it wouldn’t be a big deal. I would say we measure the intensity of the schedules against what the damage to our relationships would be.”

You could get bring the whole entourage on a fleet of buses, DiS proffers. “I do know that Chris Martin travels in a bus that’s essentially all-purpose,” quips Cain. “He takes Gwyneth, Apple and Junebug and whoever else…” “Karaoke?” suggests Keith. “Karaoke Martin.”

Apparently, they just fly between shows… “Do they own their own plane?” gazes the bassist in some wonderment. I don’t think so. “Oh, they use a public plane.” Well, I think they charter private, we say. “Continental Business class is really cool,” offers Keith.

Given how well the band did last time – particularly in the UK, a fast moving and fickle scene – do the band worry about returning? “I think there’s nothing you can do about it either way,” says Keith, unmoved. “I wouldn’t say it’s a terribly big concern for us. Though people do always need reminding about ‘you’. I also think we’ve changed enough so that people can say, ‘Wow they’ve changed, what the fuck are they doing? They suck’. Rather than, ‘this is old…’," he grins. “It bites you in the ass either way." A second’s thought: "OR, you WIN!”

From here, the conversation descends into discussions about Rambo and the anachronism of the second in the series being named ‘First Blood Part II’ (“I didn’t call it that!” protests Chris when DiS looks at him accusingly), followed by the aforementioned musings on the Rocky series. By the time we delve into the odd brother relationship of Snake Eyes and Storm Shadow from Action Force (“wasn’t it called GI Joe over here?”) and how fucking annoying Matt Tracker’s son from M.A.S.K. was, we know it’s time to leave.

For We Are Scientists though, the day is only beginning, and you can be assured that, as the band plough through endless promo, it will probably only get – at their behest – a little weirder.

Brain Thrust Mastery is out now, as is the single 'After Hours'. The band can be found on MySpace HERE