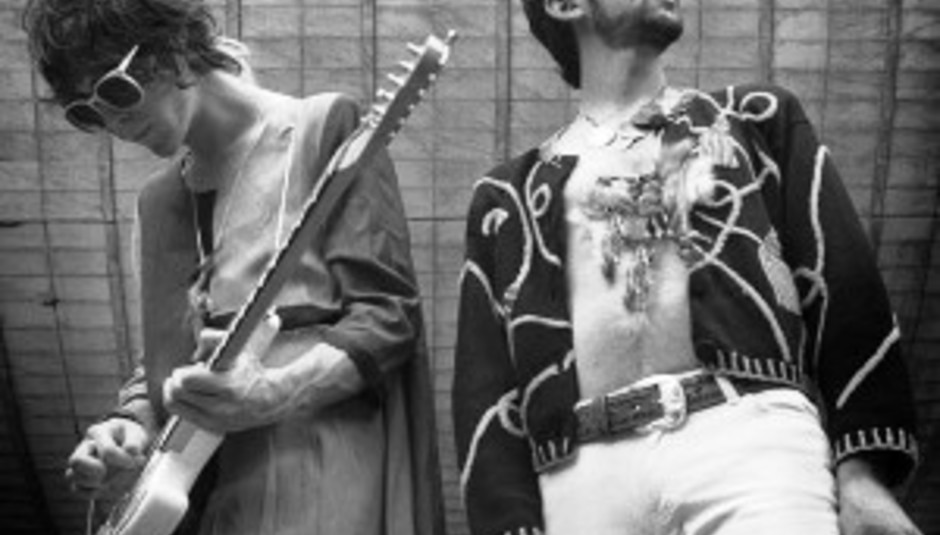 Andrew VanWyngarden is on the move; somewhere high above a satellite attempts to keep he and I connected – me seated in a London basement, he pressing a mobile to his ear while speeding to the British south coast and a date with a Brighton crowd. _Crackle… hiss… _

Andrew formed MGMT with Ben Goldwasser in 2002 while in college; the pair, based in Brooklyn, recently signed with Columbia to release their debut album, Oracular Spectacular. Out stateside now, the LP is released in the UK on March 10. Its title stems from a Google search: ‘mystic bullshit’ was tapped into the box and the album title spat out somewhere across the page. The searched expression says a lot for the head-spinning qualities of the duo’s recorded output to date, in the best possible sense.

The album’s already attracted its share of plaudits, with thumbs-up critiques from Rolling Stone and All Music already attained (DiS review to follow soon). Its lead single, ‘Time To Pretend’, is out now. As the band tear about this land in support of said releases, DiS finds out why Oracular Spectacular’s taken its time earning an official UK release, and how Flaming Lips producer Dave Fridmann helped realise MGMT’s potential.

On the move Andrew?

Nice part of the world to be in with the weather turning, but anyway, the album. It’s already out in the US – why the hold-up here?

I think if it was up to us we’d have released it as soon as we’d finished recording it, but of course that’s not the way labels do things. So, we released it in the US back in October, and it ‘officially’ came out there in January. I guess it’d be coming out even later than it is over here if it wasn’t for us wanting the release date pushed forward.

It’s got a couple of songs on it from your Time To Pretend EP of 2005, ‘Kids’ and that title track…

Yeah, those two songs do date from the EP, but the others were all written a year ago when preparing the album.

**Is anything planned for the other EP tracks? I’d hate a song like ‘Boogie Down’ to go to waste…

We don’t know. We like the songs, but we were in a completely different place when we wrote them – they’re more electronic, and kinda sarcastic, some of it.

_ (Laughs)_ Yeah. But we’d rather people focussed on our newer stuff right now.

Sure. And you’re playing the new stuff right now. How’ve UK crowds been taking to you? You just played with Band of Horses right?

Yeah, we did an NME Awards show with Band of Horses. Most of the people who’ve come to the show know ‘Time To Pretend’, but lots of them also know a few others. People tend to react really well, especially out of London – in Glasgow, Manchester and Nottingham we’ve had really energetic crowds. It’s really nice, and exciting… we didn’t realise how big an effect doing Later with Jools Holland would have.

We ended up playing a song on it, kinda an album track that nobody knows called ‘Pieces of What’, but Ben and I really like, and now crowds are reacting to that song, which is cool.

** How did you find the Jools Holland experience?**

It was weird, as it seemed a little early for us. When we played Letterman in January, that was way too early for us! We weren’t ready but we did alright.

Seems like you’re on a steep learning curve – Letterman, then Jools, before the album’s even out here.

It feels like we’re being totally insane doing them, but …Jools Holland was pretty relaxed. It was cool. I think it’s kinda funny ‘cause our live show is pretty solid but it’s not super polished – we don’t have ‘professional’ musicians or anything. I think because of that we stood out on …Jools Holland; we were these scrappy little dudes. (Laughs)

Video: ‘Time To Pretend’ on Later with Jools Holland

One band you’ve toured with a couple of times is of Montreal – do you think there are any similarities between the bands, or that you’ve been influenced by them at all?

We like their music and we’re really good friends with Kevin [Barnes] and the rest of them. They’ve taken us out on tour and introduced us to that world, so it’s more of a friendship thing. We do listen to them, but I’m not sure what influence they’ve had on the album tracks. I do like that their take on pop is a little weirder than most – that could be seen as an influence I guess.

There’s not much service out here…

Where were we? Oh, influences…

I think we’ve taken cues from The Isley Brothers, and bands like that. We don’t really listen to many recent bands. Them, and The Brothers Johnson. I think we’re shaped by our parents’ record collections – mine would play Talking Heads, Bob Dylan, Kate Bush…

You mean the part on ‘The Handshake’? We were referencing ‘Wuthering Heights’ with the chords!_ (Laughs)_

But the various influences seem to work on the LP…

I think it’s cool how the older songs have mixed in with the newer songs, and that we’ve collected together these influences, as many as we did, and people have taken to it. That’s good. I think the next album is gonna be… Well, the next album’s going to be different!

Don’t suppose you can be thinking about the next album too much yet, though…?

We recorded the album a year ago, so we’re itching to write and record again. We’ve got to promote this album for a while though – tour around the world for a year or so! We’re having a good time definitely…

It can’t be bad. What about Dave Fridmann? How’d he help mould the album’s shape? Was he at the top of the list of producers you wanted to work with?

He was definitely on the list of producers we wanted to work with; many of the others aren’t so active now, and probably wouldn’t have been so suitable. We worked on the songs extensively – me and Ben – before Dave became involved. But he’s not the kind of guy to necessarily make a radio single – he acted exactly how we wanted, and acted as a middleman between us and the label, too. He’s definitely taken things to the next level in terms of the mixing – he’s made us sound how we wanted to. (NB: Goldwasser has told Rolling Stone that certain songs required slight re-working after Fridmann’s initial mixes were complete.)

Video: ‘Pieces Of What’ on Later with Jools Holland

‘Time To Pretend’ seems to be a rather more morose number than its jaunty instrumentation might initially imply – lyrically it seems quite tied to a childhood lost, something that seems reflected in the video.

Yeah, I think that’s exactly the case. We embrace that duality – you can party to the song, or you can appreciate it from a lyrical angle. It comes quite naturally – the album combines these two worlds, of us as idealistic party kids and us afterwards. ‘Time To Pretend’ was written about two years after graduation.

** And the video – apart from it being fairly bonkers, it seems to channel the spirit of Lord Of The Flies, but in some sort of nu-rave nightmare…**

Yeah!_ (Laughs)_ It was kind of like what we were thinking about when we started recording the album – young kids in a post-apocalyptic world, living on a beach and surviving in this bombed-out city or something. We wanted to incorporate certain imagery, more psychedelic stuff. One of our friends directed it, and all the crew were friends – it was a low budget thing but everybody’s been really into it. They just ran with what we wanted. MGMT on the 'Time To Pretend' shoot

‘Time To Pretend’ is available now, and Oracular Spectacular is released on Monday March 10. Further information at MySpace. Remaining European dates as follows: