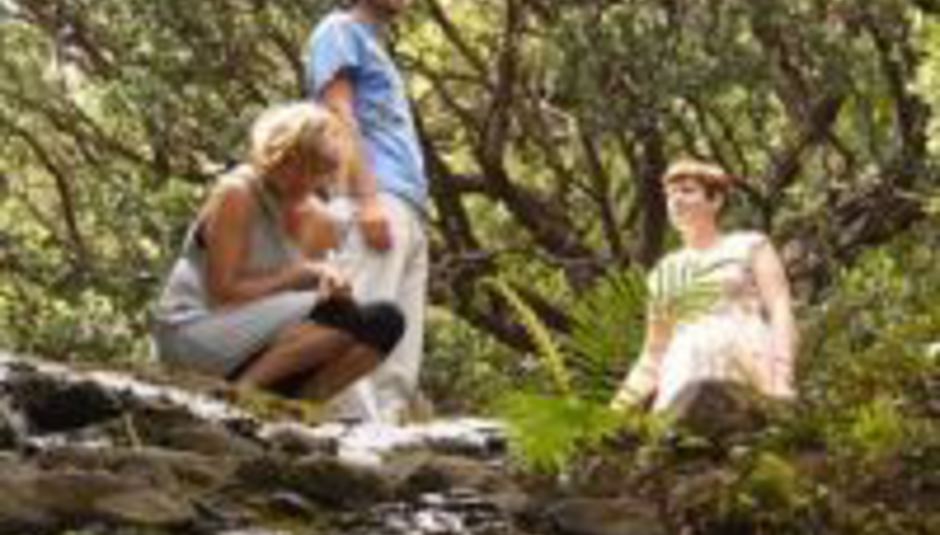 Anyone who says there isn't any good new music around clearly doesn't have a) a pair of ears and b) any imagination whatsoever. Take Auckland-based three-piece The Ruby Suns. The word ‘eclectic’ simply doesn't do them justice, as one listen to their awesome new record Sea Lion will prove.

Formed initially by native Californian Ryan McPhun upon his arrival in New Zealand at the back end of 2004, The Ruby Suns were initially a five-piece whose sound at the time was comparable to the likes of The Shins. A self-titled debut album followed a few months later, until McPhun finally settled on a core three-piece featuring himself on lead vocals, guitar and keyboards, Amee Robinson (keyboards, saxophone, percussion and vocals) and Imogen Taylor (keyboards, bass and flute).

Two years later and Sea Lion is upon us (review), a record that holds no boundaries, drawing immediate comparisons with the likes of Panda Bear's Person Pitch in terms of its originality and diversity. Intrigued by their development, DiS caught up with Ryan McPhun to find out more about The Ruby Suns, particularly the motivation behind constructing one of the most innovative albums 2008 is likely to bestow on us.

Your new record Sea Lion is one of the most ambitious collections of music heard so far in 2008. What were your main influences and inspirations behind the record?
I guess it was influenced by a lot of different stuff. I was really into the Elephant 6 thing a few years ago. Kala was huge to me, too. I dig all the Animal Collective records as well. I got really into Arthur Russell - Calling Out Of Context is probably my favourite. I really enjoyed the Congotronics album by Konono No.1. I'll always have a place for the Beach Boys, too. There are so many I guess...

Some of the subject matters are quite fascinating, and 'Tane Mahuta' is even sung entirely in Maori. Do you write the songs as a joint collaboration between all three members or is one person responsible for the whole process?
It's usually me that does everything. I'm a bit of a control freak in that sense! I find it hard to work with other people most of the time.

Sea Lion represents a marked departure from your first album in terms of its broadly experimental feel. What were the main differences between making the two records?
On this newer one I tried to leave more breathing room, like having 30 seconds for some noise to sit there and do its own thing. I was getting really into noises that weren't necessarily musical, like a hot tub. I really liked listening to that hot tub, so I recorded it. That's at the end of the first track, 'Blue Penguin', and there are these kids screaming. That was at an indoor pool...

The band's line-up has also changed significantly over the two years between records. How much have the new members of The Ruby Suns changed both the dynamic and sound of the band?
Well that hasn't changed the recording process at all. Right now, with three people, we're doing more of a prepared thing live in that we're sometimes playing on top of recorded stuff, or we're playing on top of drums that I loop live, that sort of thing. We're trying to make as much noise as possible for having less people.

Your music has been compared to people like Mercury Rev and Animal Collective. How would you describe your sound?
Honestly? I don't know! Messy but pretty. I'd like it to sound good to the people that I look up to.

Sea Lion is currently getting positive reviews from many publications. Does this, coupled with the aforementioned comparisons, put the band under any pressure to live up to such high expectations in the future?
Well, we've had more lukewarm press than intensely favourable in the past, so I'm hoping that I'm setting up some sort of pattern. That pattern being that I will change direction with each release or at least try something different each time, so hopefully people will be open to hearing different sounding stuff from album to album. You are originally from California. Would you ever consider returning to the States or do you see New Zealand as your home now?
Well, I'd say the quality of living is better in New Zealand. There's a little less bureaucracy which is nice. It's definitely my adopted home. Half of my family come from here and I've been coming since I was a little kid, but I'm sure there are a lot of other nice places to live.

You're also involved - albeit to a lesser extent - with several other Auckland-based underground bands, The Brunettes being one. Will you be working with them in the future, especially as The Ruby Suns' profile looks set to increase with Sea Lion?
I officially left The Brunettes in 2005, though I have played a couple of shows with them since. I still play in the Reduction Agents and Signer. Oh, and a post-Beatles Paul McCartney covers band called The Disciples of Macca. Hopefully I can play with them again someday, but it's tricky getting everyone in the same country at the same time.

You're signed to Memphis Industries in the UK and licensed through Sub Pop for the rest of the world. With the reputations of both labels, are they supportive of what you're doing and are there any expectations from them for the future in terms of record sales?
They're both very supportive and say nice things. I really appreciate this. I don't expect there to be much pressure from them because we don't seem to fit into any particular scene or fad or genre or whatever, so that'd make our albums harder to sell potentially. I don't think anyone's expecting to make a million bucks off us!

Are there any plans to release any further singles from Sea Lion?
Well that's really not up to us. If the labels want to put money into a single they will. If they don't, they won't. So far we've released two tracks to radio here in New Zealand, and both have done really well. One of them was actually number one on the alternative charts for two weeks in a row, but this is in a country where you have to sell something like 7,000 CDs to have a platinum record!

Do you have any plans to bring The Ruby Suns over to the UK for some live shows?
We're coming over in May, but booking shows is always a challenge, especially when you don't have a pushy manager making cash off you.

Are there any other New Zealand/Auckland-based bands you feel we should be listening to who have perhaps not gained the recognition or attention they deserve so far?
Signer is fucking amazing! This guy Bevan Smith is so low key you'll never hear about him. He just released a record with a friend of his in Europe under the name Skallander on Type. He's released a couple of Signer records on Carpark in the States. I've been playing some shows as a member of his band, but I don't do the important stuff and I didn't write the songs (so I can be objective about it, sort of!). I played at a festival with these guys and I'd just come off touring with The Ruby Suns. I didn't know any of the songs (my job was to improvise with singing / looping / making noises) and I got to the first show and set up and we started playing and I was so amazed at the songs. It's kind of a ravey thing, yet hard to describe. Others worth a mention are The Tokey Tones, The Sneaks, Lawrence Arabia, Stefanimal, Bachelorette, and Golden Axe.

The album Sea Lion (review) is out now on Memphis Industries.

For more information on The Ruby Suns visit their MySpace.