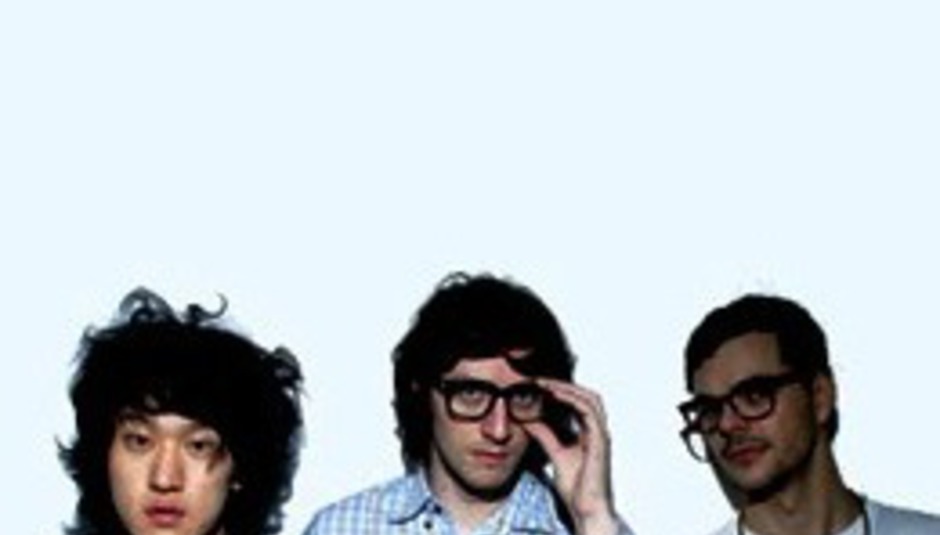 Triple X Teens: down and dirty with The Teenagers

Triple X Teens: down and dirty with The Teenagers

Although actually in their mid-‘20s, The Teenagers – the band, that is – exist somewhere in the gap between bacchanalian adman fantasy and the blotchy reality of being an adolescent in the post-Skins era. We know this because their smirking tells us as much, peering out from under their hoodies and bounteous hairdos with disarming ease.

At best theirs is an artful wheeze; a slouching, celebratory synth-pop confection blankly reciting tales of bourgeois hedonism while hinting at a melancholy that suggests all’s definitely not well with ver kids under the flailing exterior.

Quentin Delafon, lead singer with the London-via-Paris trio, whose live incarnation has recently expanded to a five-piece, has this to say on their typically erudite paean to party girls, ‘Fuck Nicole’: "It’s just really trashy, I mean it’s a judgemental song but we’re part of that culture as well, even though we’re 25, 26 or whatever, you know our youths have been extended now so we still have a few years ahead of us."

But with a song like that are you leaning more toward critique than celebration? “It’s a bit of both I think, you know sometimes we wake up and we don’t know where we are or we don’t remember what happened. Nicole’s really just the kind of person you see that’s just the party girl that ends up fucked up at the end of the night.”

Michael (Spziner, bass): "But then these are the ones you can pick up, so…"

Opportunists to the last. As much as there’s ambiguity in The Teenagers’ ostensible filthy-mindedness, their lyrics on forthcoming debut Reality Check aren’t always as interesting as the premise would seem to suggest, offering little in the way of insight into the hedonistic world they portray, yet too pleased with its ironic perch to commit to meaningful critique.

Quentin, however, maintains there’s ample substance lurking behind the surface for anyone interested enough to find it:

"I think there’s depth to our songs which some people don’t understand. But we don’t want to come across as too serious, there’s nothing wrong with a bit of light entertainment. That doesn’t mean it’s shit or bad quality, We’re epicureans in that sense, we just want to be enjoying ourselves with our music."

Dorian (Dumont, guitar, synth): "We can’t force people to think about the lyrics, but they should."

'Starlett Johansson' is one example where the band’s self-depreciating wit makes a welcome appearance, an enjoyable tale of vicarious celebrity lust with some genuinely amusing lines: "You whisper in horses’ ears / I always found it exciting / I’m scared by spiders too / I never managed to blame you".

It’s also one of several scattered references to celebrities throughout their album, an unhealthy obsession which the band chalk up to the internet’s malign influence, as well as Britain’s rampant red-top culture.

Quentin: "The internet makes access to information easier, but then over here you have a very very strong celebrity culture. Even if you don’t wanna know you’re confronted with it, all the posters and magazine covers and stuff.

"In France if a journalist had a video of the French Kate Moss snorting coke no-one would put it out, it’s so disrespectful and in France there’s this culture where you do what you want to do behind closed doors. So you know we make fun of that but we also embrace it because we’re part of that culture."

The explicit language employed by the band (sample lyric: "I fucked my American cunt") has already accrued them a certain degree of notoriety, but it’s debateable whether such tactics have any relevance in today’s cuss-weary culture beyond conveying a basic desire for attention. The band claim a cultural faux-pas as their alibi:

Dorian: "It wasn’t on purpose, we didn’t know it was such a horrible thing to say."

Quentin: "To us it’s like shit, titty, poo or whatever, it’s just the language people around us are using. Jane Fonda just said ‘cunt’ on American daytime TV the other day. She was talking about the vagina, I don’t know why."

I was going to say a feminist. The kids of today, eh?

Reality Check is released via Merok/XL on March 17; further information at MySpace here.