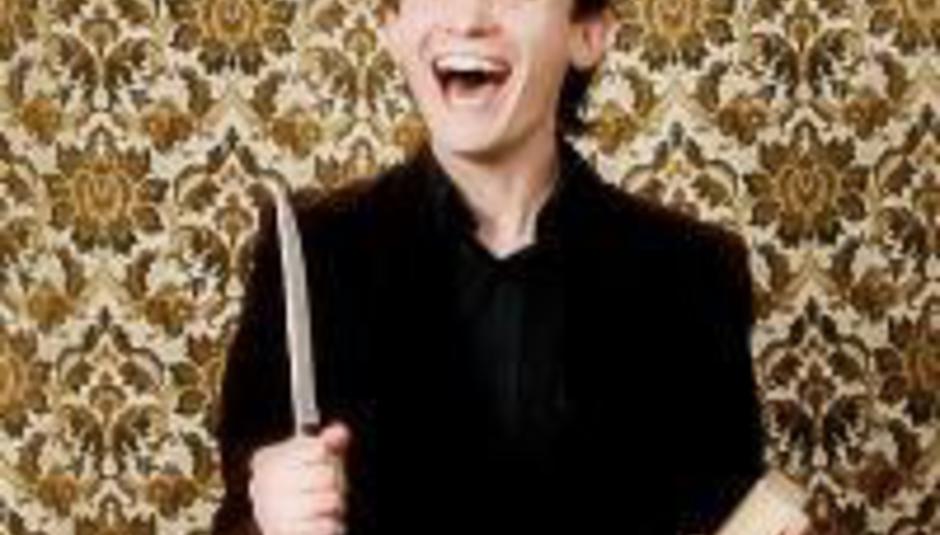 The first solo project to emerge from alumni of the on-ice Field Music project, David Brewis’ School Of Language debut Sea From Shore strips his former band’s sound of its instrumental niceties and hacks away at the remains like some kind of demented post-structuralist hairdresser.

The indelible hooks remain, but where Field Music erected scaffolding around pop’s fine edifice in their deconstructive efforts, School Of Language get the bulldozers in, taking them deeper into a freak-pop territory inhabited by the ghoulish likes of The Dirty Projectors and Blitzen Trapper.

Over to Mr Brewis to tell us more about why they is basically well good.

Was the aim to strike out for weirder territory with Sea From Shore?
I think I’ve been affected by some of the criticism and even the praise for the albums we’ve put out. You get reviews where it’s like, “that doesn’t sound like the album I thought we were making”. The one we always get with Field Music is the one about us being wacky popsters from Sunderland with our cheery tunes that make people feel like sunshine, whereas I think they’re quite miserable records in a way, they're quite down.

The weirdness in what we’ve done so far often isn’t noticeable because the production’s quite pleasant - there’s nothing sticking out there - and I started thinking why do I do stuff like that. I’d rather do something where all the cracks show, something that makes the weird stuff more explicit.

Particularly in relation to the moniker, is there an element of deconstructing what you do as a writer with this project?
Yeah absolutely, I think I’m somebody who analyses what I do because I think I can become a better writer and gradually it gets closer with the records I produce to the ideas I have about how I’d like them to sound.

Did competing pop and experimental sensibilities between band members contribute to the decision to put Field Music on hiatus?
Well I think we’ve all got pretty similar taste in music, so it’s more about how we wanted to process the work. The record that Peter says that he’s going to finish this afternoon I think is an even more experimental record. That’s strange because most people would perceive that with the Field Music albums Peter’s songs are the ones that have a greater pop sensibility. He’s got this melodic facility which I can only look back at with awe.

The post-punk tag which seems to have followed you around since the outset of your career seems increasingly redundant in light of the music you’re producing...
(Chuffed) Get in! I can’t even listen to XTC now, I like the first one a little but the rest, well… that’s good to hear though, that’ll be interesting.

- - -
School Of Language on Channel M

Was the SoL record conceived of as a conscious break from the past?
I think the break came a long time ago, like with the first Field Music record we were really trying to play with new ways to do rhythms and things, but by the time it came to the second we’d be like, “don’t do that drum beat, it’s like a Field Music cliché already”. But the drumbeat on ‘If Only The Moon Were Up’ sums up a particular way of doing drums which became ubiquitous very quickly, like the first Bloc Party single off the last album (‘The Prayer’), that’s the same drumbeat but put back a bit.

You mentioned one motivation for embarking on solo ventures was the chance to process your work differently – what do you mean by that?
The thing initially was I wanted to be able to reduce the amount of time between coming up with an idea and getting to the finished product. We recorded on a hard disk but it worked the same as a tape machine and it’s time consuming, basically. What I can do now is if I have a song in my mind I can just start it without knowing what’s going to happen in the next part of the song.

Was there a feeling perhaps with Field Music that the live experience wasn’t really matching the recording one?
I don’t find gigging to be as satisfying as recording and I don’t think that’ll ever change. Field Music did become an exercise in seeing how well we could replicate our songs in a live setting, and the best we could hope for was to get to the stage where we were very well rehearsed and we might have fun lashing through the songs.

I honestly can’t see us producing anything as Field Music for a long time. We’re aware that if we did another Field Music record it would have to be something that would incorporate everybody’s ideas about where we wanted to go.

You played a Thrill Jockey anniversary show in Chicago with a live band – do you plan to recruit permanent members for future dates or SoL projects?
I don’t think I’m going to play solo for much longer, I’m finding it too nerve-racking. I like rocking out and if things aren’t going well at least you can play loud, but with a solo gig I’m just sitting there creasing up in agony.

The new single combines parts of two songs which bookend the album, ‘Rockist Part 1’ and ‘Rockist Part 4’. What prompted the idea for that?
Well those two are basically the same song. I hadn’t really thought what the singles would because there have been too many arguments in the past. Memphis suggested ‘Rockist 4’ but that track starts with a drum fill, so taking inspiration from ‘Strawberry Fields Forever’ (whose recording is famously an edit of two versions of the song) I thought, why not take 25 seconds of 'Part 1' and just splice them together?

Just you and John Lennon out there representing on that front then. I seem to remember Robbie Williams once saying the spirit of John Lennon had helped him write a song for one of his albums...
Well he strikes me as a slightly self-delusional chap anyway... Did I tell you about my new song? It’s a tribute to world peace.

Sea From Shore is out through Memphis Industries on February 4, preceded by a single, 'Rockist', on January 28. School Of Language will be performing live throughout January and February and will appear at DiS's London Monto Water Rats show with Wild Beasts, Banjo Or Freakout and It Hugs Back on Thursday (January 24, £7 adv, details).