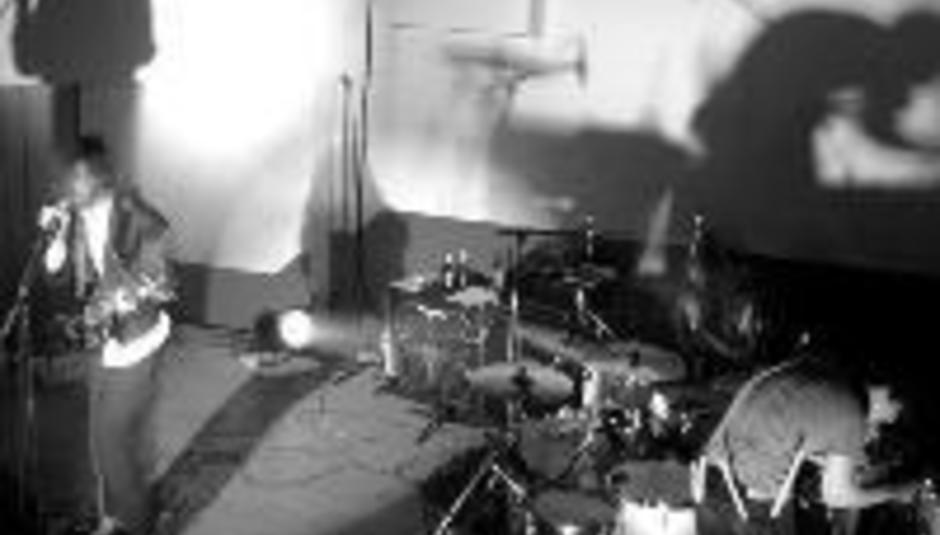 Buzz, ring, crackle, pop: “Hello?” Not quite calling intercontinental, but nevertheless an American voice comes creeping through the long-distance fog, its path far from aided by mobile technology so brilliant at incorporating multi-mega-pixel cameras and thousands of cack pop trax, but less perfect at guaranteeing clarity when trying to reach Italy.

“We’re lost right now, trying to find the venue. It’s not so bad a place to get lost in, Bologna, but we really are literally that: lost.”

Liars’ Aaron Hemphill – guitar, percussion, synthesizers – sounds slightly relieved to, for however fleetingly brief a period of time, not have to worry himself with navigational concerns; he leaves such matters to, presumably, a hired-hand driver and vocalist Angus Andrew and drummer Julian Gross. Currently all based in Los Angeles, the alt-rock art-punk Australian-American trio (one third to two) are in Europe to support their fourth LP, simply titled Liars (review). Their first British date of the tour is November 29 at Bristol’s Thekla.

Hey Aaron. I just wanna focus on your latest album, really. It must be pretty pleasing, in an age where debuts are so scrutinised and acts dismissed after single releases, to have made it to album four and still find so much acclaim coming your way?
Yeah, well, I dunno. We just follow our hearts, and that seems to be doing well for us.

Liars came out back in August – have you had the opportunity to take a step back from it and reflect on your achievement at all?
It came out in August, yeah, but since then we’ve not had time to reflect on that, or anything. In order to turn the record around as quick as we did it took an awful lot of work, and we’ve been pretty much working straight through with no time off between the last tour for Drum’s Not Dead and now. We’ve been writing and recording, and now we’re on tour again.

Drum’s Not Dead, Liars’ third album (review), was released in 2006; since then the three-piece have barely paused for breath in the pursuit of progression and expansion, retrogressing slightly to incorporate pop-focused arrangements alongside their trademark odd-rock meanderings so brilliantly showcased on long-players three and two (two being 2004’s They Were Wrong, So We Drowned). Liars, at times, echoes the most immediate NYC-scene rock moments of the band’s breakthrough album, then as a four-piece, They Threw Us All In A Trench And Stuck A Monument On Top. All are available via Mute, FYI.

Given your hectic schedule to this point, I assume that Christmas is going to offer the three of you the chance to take a proper break from the band?
We do have about a month and a half off for the holidays, but I’m not sure what we’re going to do during that time. We’ll probably rehearse a lot, and… well, potentially start writing the next record.

Are you already formulating plans for album five?
At the moment the next album’s not really in our minds – we’re just thinking about the touring for this record – but things do pop into our heads, and there does come a time when Angus and I will begin talking about it, and then it’ll just happen. It just sort of takes a spark, something that happens with every record.

Does it never concern you at all, this inability to switch off? It sounds like you’re a workaholic…
I don’t think, when we have time off, we ever stop thinking about the band, and working. That doesn’t mean that I don’t get a break, but it’s sort of different when you work at something you really love to do. So even when we have time off, or I’m maybe doing other things, I’m still thinking about the band. It is difficult, therefore, to separate yourself from it – I think it’s the only thing that we do, Angus and I, so…

Do you worry about taking what you have for granted at all? So, to combat this, you keep at it?
I think it’s like, if we’re lucky enough to be in this position, where we’re able to do what we want to do, then why not do it as much as we can? It’s a different definition of ‘workaholic’. If we’re not writing or recording then we’re on tour, that’s basically the deal. It’s less defined by what’s produced, versus what’s attempted. But I am hoping to try to relax during the time off!

Liars’ geographical discrepancies have been a topic of interviews past – Andrew and Gross met at college in Los Angeles, with Hemphill based at the time in San Diego. Not so far to travel, then; but soon souls began wandering, with the entire band upping themselves to New York for Trench (Liars are still considered to be an NYC act by a number of journalists, who neglect to acknowledge that they left the city that never sleeps in 2004 and haven’t laid their collective hat there since), and recording Drum’s Not Dead in Berlin. Portions of Liars were also recorded in the German capital, but currently its makers can each call Los Angeles home. Save for when they’re lost in Italian cities and the sunshine coast seems a very long way away.

You’re all in LA, right? That must make these rehearsals and writing sessions just that little bit easier.
At the moment we’re all based in the same place, but we have always written songs apart, Angus and I. Even if we lived in the same town, we’d probably still write songs apart. That aspect of the band hasn’t been a factor in any changing of sound, or whatever. If anything, things are more productive that way. It’s how we’ve always done things, since the first record.

And the system seems to have worked so far…
We just try to appreciate that we’re in a very lucky position, and in appreciating that…well, the way we define ‘appreciation’ is being able to work as hard as we can and make the best records we can.

Former tourmates of yours, The Blood Brothers, recently called it quits (news). As a fan, what do you make of their decision?
They’re great friends of ours and it’s sad for fans of their band to see them break up, but I also feel that it’s a display of integrity to call it quits like that, and the members will move on to make some really great music. I think there’s a blurry line when people say they make records for themselves, and others want records for the fans; you’ve got to make something that you like, and you break up when you just can’t take the other pressure any more. That’s the only thing you can do. I met them on their first tour – I’ve known them forever – and I think it’s sad, from the point of view as a fan of their music, but I think it’d be sadder if they just continued without loving it. I think it’s most important that they stay friends, and I stay friends with them, and as long as they’re happy they will make great music, either together or separately.

Liars is, much like its three forefathers, an incredibly acclaimed release – one of a number of releases issued this year that has not sold in quantities that such praise should promote. A quick glance at Metacritic sees it scoring a compiled 79, no mean feat for a band whose days of industry hype are well behind them. Liars is one of DiS’s 50 albums of the year, and can be voted for in our readers’ poll here.

Liars is one of our albums of the year here at DiS. Just so you know…
Oh wow, really? It’s always greatly appreciated, and very flattering. I think how we feel, when we receive these things, is that we have to be quite… diplomatic. It doesn’t take any weight off of how great that is for you guys to be so nice to us, but we’ve always had the philosophy that if someone gives you a shit review and you conclude that’s just that one person’s opinion, then you have to do the same with positive reviews. I think, again, it’s very nice of you, but that’s our approach – it’s less “Oh, they like this record!” and more “Right, let’s make another one that’s as good”. It sets us challenges to make records that aren’t just as enjoyable, but that are more enjoyable.

Catch Liars in the UK from November 29, and hear them on MySpace here.