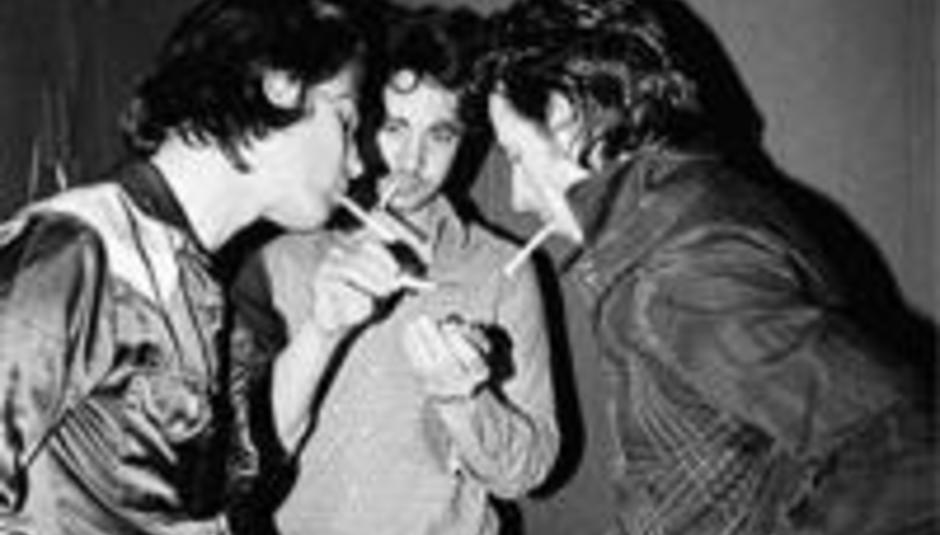 On the phone from London, Conrad Standish of Australian expiates Devastations speaks in a slow drawl. Through it, a slight smirk is detectable. He’s sardonic, sharp; cheeky in a deadpan sort of way. Or maybe he’s just experienced a lot. Moving from Australia to Berlin to London certainly seems like a good way to wise up to the world and music and all that is involved with making it.

“I guess moving just seemed like a more fun option, really,” says the singer and bassist. “We realized that was perhaps only so far we could really go out that time in Australia. It’s not as if we’d raced up the charts or anything, it’s just it was more viable to base ourselves in Europe and see what could happen. Saying that, it’s not like we’re racing up the charts here or anything, but it’s not about that.”

There’s no doubt that Australia is isolated. Moving away from the country is something that a lot of Aussie bands might grapple with; is it better to stay on your own soil and tough it out or try and make it big overseas? That’s not to say it’s not a supportive place to live and create music. But it’s hard to do things like, say, play in London if you’re in Melbourne.

“There’s a lot of things I miss about Australia, but unfortunately it’s just so far away from the rest of the world. And I don't think that we really ever saw ourselves just remaining in Australia for our lives, or for the life of the band. I think it’s good – if you’re able to do it, I would recommend it. It’s not for everyone, of course, but I enjoy it.”

Since making the big move, Devastations (completed by singer/guitarist Tom Carlyon and drummer Hugo Cran) have played with a wide variety of bands and performed at the Dirty Three-curated All Tomorrow’s Parties in April 2007. Their strangest support slot would probably be opening for Brazilian sextet CSS. Not the most likely paring, but it worked, strangely enough.

If a lot of noteworthy things have happened since the band’s move, they’re marred somewhat by it shifting journalists’ lines of questioning from their actual music to the relocation. It seems that every single Australian interview Conrad has done has focused, in some way, on the move. In the case of European reviews, just flip it around, reverse the questions. It’s a shame, I guess, but it’s a big deal, especially for fans in Australia, for whom it’s natural to want postcards and tales of success. It did makes wonder if making music on the other side of the world effects the way that you create it.

“I think (latest album) Yes, U would probably sounding exactly the same if it was made in Australia. It’s funny that you think it’s a dark album … well, I guess it is dark in places. But it’s not like a downer of a record. It probably just comes from the fact that we’re really horrible people [laughs] and wherever we record probably won’t change that fact.”

Yes, U, their third album, is a fairly dark record, and one with a lot of depth (review). It’s not just a brooding sort of dark, but an expressive one that hits your emotions in just the right places. They’re certainly linked aesthetically to the noir rock of Tindersticks and Nick Cave and such, but for me Devastations focus more on crafting their own unique tones and voice, even if it’s a subtle one. It sounds extremely cool and much more sensual and stylish than those who came before; tracks jaunt along at a low rumble, always at night, sticking close to the shadows. Excuse me for the pun on their name but often it really does sound devastating, or at other times devastated. The sense of atmosphere here is tremendous.

“When we write songs we have a vague idea long before we think about recording them, of how we want them to sound and what kind of an atmosphere we want to try and achieve within each song. Without sounding like Tori Amos or making out some big process of catharsis, yes, they are generally pretty personal. Even if they’re not in the first person.

“I think we can only write about things that we know about. It’s the only thing that I can do. I’d be hopeless if I worked in a pub or as a waiter or whatever. It really is the only thing I want to do; I love doing it, it really excites me. I find it quite a magical thing to be involved with. I’m really fortunate.”

Yes, U is out now via Beggar’s Banquet. Devastations’ MySpace can be found here. Live dates:

Win tickets: to be in with a shout of winning a pair of tickets to Devastations’ London show at Corsica Studios, simply send a note to Mike Diver via this link. Write ‘Devastations comp’ in the subject line. The winner will be contacted via a note on October 29.