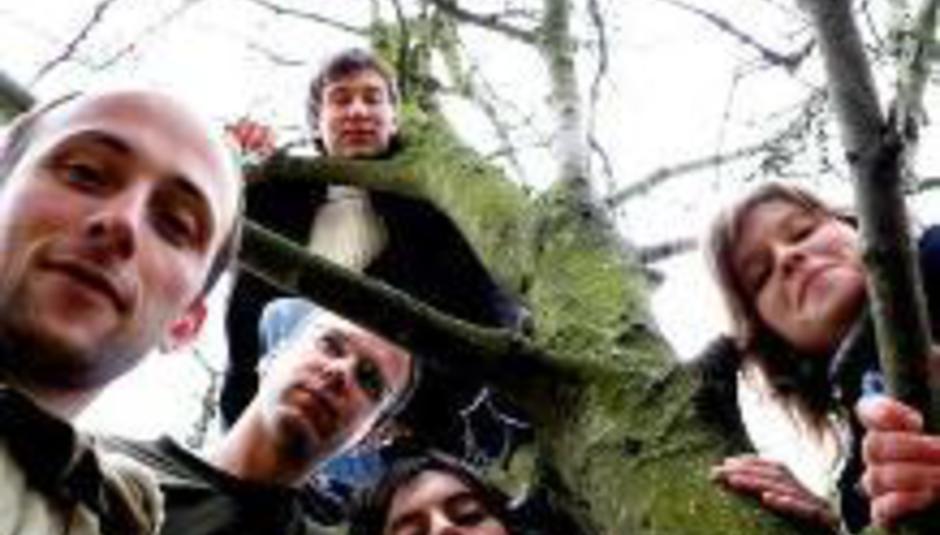 Stars of Aviation are a right little gem of an indie-pop band – purveyors of the sweetest lullabies with overtones darker than your average band categorised as ‘twee’. Whatever that means today: it’s not like SoA remind us any of Belle & Sebastian, and aren’t they the be-all and end-all of the catchall?

Stars of Aviation began life in the last decade, and have to date released a pair of EPs and a well-received single, ‘Marie et l’accordéon (review). Their current line-up is enough to warrant the use of name badges at gigs: Jonny (guitar, vocals), Andy (guitar), Tim (drums), Louise and Nathan (accordion, keys, singing), Tim (bass), Chris (drums, trumpet), Leo (bassoon) and Colin (violin, gong). Got that? Be sure to say hello to as many members as you can come this Saturday’s DiScover Club, where they perform alongside Caz Mechanic and Bobby Cook (details).

It seems strange doing a 'DiScover' article on Stars of Aviation, as you've been together, albeit in what seems like a fluctuating form, for some time. You first formed a long time ago, right? What's kept the band glued together for this time, and what's stood in the way of you releasing more material than you have?

Yes we have been together eight years now. None of us were in any bands before this one, so some things we tried worked better than others. It's just taken us a long time to learn how to play pop music that we're really happy with, that makes other people happy too, hopefully.

The line-up has changed a fair bit: four of us are original members and the others have joined over the years. When Louise joined that was a really big thing for us. Having a girl singing changes the sound a lot, and she plays about five instruments and wears clothes which none of the rest of us would look any good in. The accordion made a big difference for us, getting a trumpet player too; every time someone joins it transforms the group and we become really dependent on them.

The people that have joined tend to be our friends. For example one of us worked with a guy who happened to play the bassoon, so he joined the band and it sounded really good; we didn't just wake up one day and think, “We really need a bassoon”. The downside of having so many people spread out all over is that it's really hard to get together to record.

A lot of us have proper jobs that we like as well so it's hard to find time. Having said that, Amelia Fletcher is a leading economist so that sort of takes away that excuse, as she has recorded about a million albums.

Your releases to date, however sporadic, have all met with considerable acclaim. Clearly there's a winning formula at work, but would I be right in presuming that to reach this formula takes time? Perhaps more time than many other bands? Your last single was released last summer, after all…

The idea of a formula is quite appealing: it's not got much beyond one part inspiration to nine parts perspiration. Up until recently it took us about six months to write a song and then about another six months to arrange it, and then about another year to record it so we have not been exactly prolific. These things have started to come a lot more easily and quickly recently, though – in part because most of the band now lives in Brighton.

As a nine-piece, are you able to play all that often, and if so is it always in the full line-up formation? I worry, see, as the Notting Hill Arts Club stage is pretty small! Just how difficult is it to get together for things like rehearsals? Do you live anywhere near each other?

It has been difficult to get together at times, as at times we have been spread out geographically, and there are so many of us.

We have never yet found a stage we can't all fit on to, but it's a close call sometimes. The tightest fit was actually our show at the Macbeth last week at a Twee as Fuck night – I think Lou got hit around the head once or twice with a stray guitar.

Does the 'twee' tag irk you any? You're not as, I dunno, soft as some bands categorised as such an act… It also carries certain connotations, that manifest into opinions ahead of actually hearing anything – ever had any marked audience turn-arounds, where the band has exceeded expectations quite noticeably?

We don't have any real objection to people describing our music as twee - we like a lot of indie pop and twee pop. But we wouldn't consider our songs, our arrangements and our production particularly twee as a whole. There are definitely some things in our music, some of our rhythms and instruments, in common with indie pop. But we take things from folk music, French chanson and pop, hymns and Christmas carols too. We think of our music as pop music and that is enough for us - twee doesn't capture it at all really.

When will a new album be ready, do you think? There's not actually been one yet, has there… or do you count Snow on Snow as an album? Will it win the award for Debut Album With The Longest Gestation Period Ever?

It feels like we've been working towards an album for eight years. We want the album to be as perfect as possible – we've never wanted to rush to get an album out if it's going to be patchy. We also don't want it to be a big pastiche of loads of different things; it should have some kind of consistency which makes it hang together. It's taken us this long to find that.

We've never had a label to set us deadlines, tell us to hurry up or to pay for studio time – as a result, we've proceeded at our own pace, which is generally a burst of activity followed by a long period of inactivity.

We've recorded half an album, and we've written and are ready to record the rest and so things are picking up speed, we hope. If we can find a way of releasing it, the album will come out next year, and it will be the end of a long wait. We decided on a title in 2004!

Live plans seem a little loose post this DiScover show… do you plan to tour properly at all soon, or is it simply something you can't do right now? Talking 'bout DiScover show, have you had the chance to hear Caz Mechanic?

When we've got the album out, we plan to tour as widely as possible. In the meantime we would love to tour with someone else but we wouldn't organise our own thing.

But we're really excited about a couple of shows coming up - on October 24, which is the start of a new indie pop night in Brighton, called Dog on Wheels, and a Spiral Scratch night in London on November 29, when we will be supporting the Icicles.