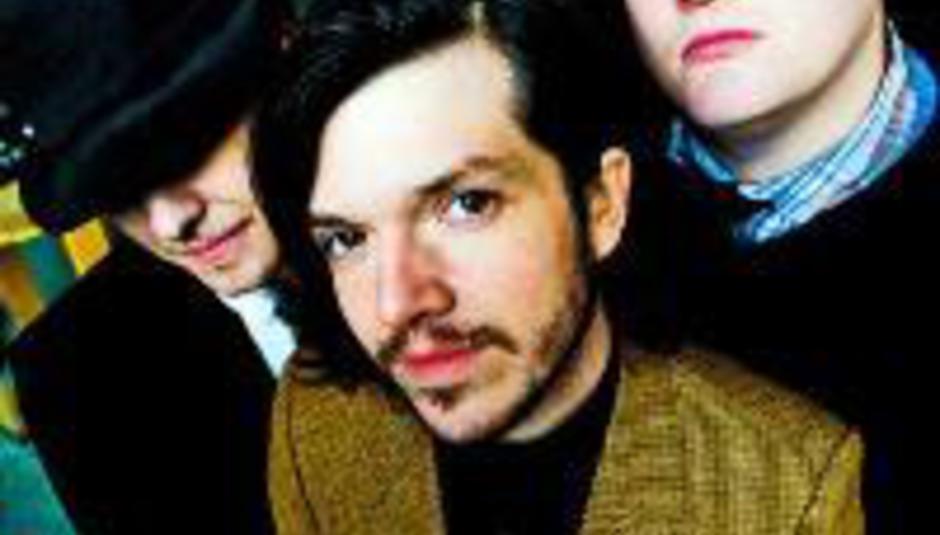 Punk-funk. There’s a catch-all we’d pay to never see in print again. But if you take the aforementioned epithet, loosen it at the bolts a little, add a pinch of Clap Your Hands Say Yeah’s quixotic brilliance, and some killer tunes to boot, you get south London trio William, and chances are you’ll be seeing their name in print plenty over the next year or so. DiS was on hand to get the lowdown from Gavin Housley (vocals, guitar), Mark Thomas (bass) and Dan Sheridan (drums):

You’re involved in running arts collectives outside of the band. Is it kind of an incestuous scene in terms of people swapping ideas and band members about?

Mark: Kind of. I mean, with William I knew Dan through a friend and asked him to come in, and he said no...

Gavin: I said no as well, actually.

Mark: We got booked for a gig and we couldn’t do it ‘cause we didn’t have a drummer. I said let’s get Dan in so he can play a few songs with us and the rest we can do acoustic. So Dan said alright, just this once, and he’s just stayed with us ever since.

Gavin: You make him sound like a dog, y’know: give him a wash and a few beers and he’s alright...

(Pause to contemplate who would placate a dog by giving it beer) You've mentioned before how you were still feeling your way around as a band and how ‘all art is a stab in the dark’? Are you still making this up as you go along?

Mark: We’re more focused now, at first we weren’t really taking it seriously but after we put out the first single it just sharpened us up and made us figure out our own sound a bit more. We stuck with the power trio thing which is fine, I mean it’s difficult y’know ‘cause you’ve got to compete with bands with like five or six members, plus no-one else sings either so you can’t back it up with harmonies as a lot of people do... we’ve stuck with the three-piece and I mean, it’s not like we’re social retards but we’re not exactly super scenesters...

So you think that maybe if you got out a bit more you might be able to recruit more members?

Gavin: Yeah yeah, we could get like a choir and everything... it’s nice though, ‘cause the more people get involved the more complicated things get, unless you’ve got bystanders willing to just do what they’re told. But yeah we’re still finding our feet, it’s bridging that gap between what you listen to and what you’re actually like as a band, and we’re creeping towards that but we’re not there yet. We’re at the beginning of that point where you start to take things seriously.

I’m guessing from the other projects you’re involved in you’re fairly well-versed in the arts as a whole? What film would you like to soundtrack?

Mark: Maybe some American frat party film, that would be fun. Like a road trip with these college kids going to the Big Apple for the weekend. Actually wait that’s a terrible idea.

Gavin: Or maybe a Wes Anderson film, that’d be cool. He always gets good bands in his soundtracks. I’d quite like to play 'Johnny B Goode' like in Back To The Future, that was like the first thing I learned to play on guitar.

Do you think you could wipe the floor with J Fox?

Gavin: I reckon probably yeah. I’m a bit taller than him.

Hmm. A lot of your lyrics seem to express disillusionment and you mentioned in a previous interview that you spent a lot of time before you joined the band 'avoiding reality'. Care to explain?

Gavin: I link that back to the semi-detached house business, just the whole suburban life thing... There’s a term that (skateboarder and photographer) Ed Templeton came up which was a ‘deformer’ which is like this abnormal suburban kid, it’s that sense of being stuck in the middle really, not in the country or the city. Being so close to London is bad in a way, it’s quite hard to appreciate the place when it’s on your doorstep. It’s not like if you’re living in the country and you hate it so you move to the city or whatever. It’s an in-between sort of place, you know, it never really gets dark ‘cos there’s always this orange glow...

You also mentioned in one interview your frustration at communities not being able to thrive organically without being appropriated – does that inform your music much?

Gavin: Yeah that does play a part. Having said that, there are people who’ve made it work, people like Fugazi or whatever who’ve managed to sidestep all of that stuff... You have this thing where big business snatches up the counter-culture, and I guess we’re just trying to come out on top through all of that.

There are very few acts that straddle those credible and chart-bound worlds well, but you seem to have a strong pop sensibility?

Mark: Yeah sometimes we think, well people are used to us being kind of this poppy thing, so we’ll try and do something heavy and dark... It’s nice to have that flow and that diversity though, you know we’ve got songs like 'Aperture' and then we’ve got songs like ‘Whoreditch’...

I beg your pardon?

Gavin: Yeah, 'Whoreditch' is actually about an old graveyard in London that they’re trying to build on, but they can’t because it’s full of prostitutes and poor people - basically if you didn’t have any money for a grave they’d just dump you in there. Then there’s the whole Shoreditch thing obviously... but even a lot of people living in Shoreditch have that self-mocking thing, you’ve got the Shoreditch Twat...

William have a new release, Five Minute Wonder EP, out on October 1 through Tough Love Records, in the meantime you can check ‘em out on their Myspace, here.