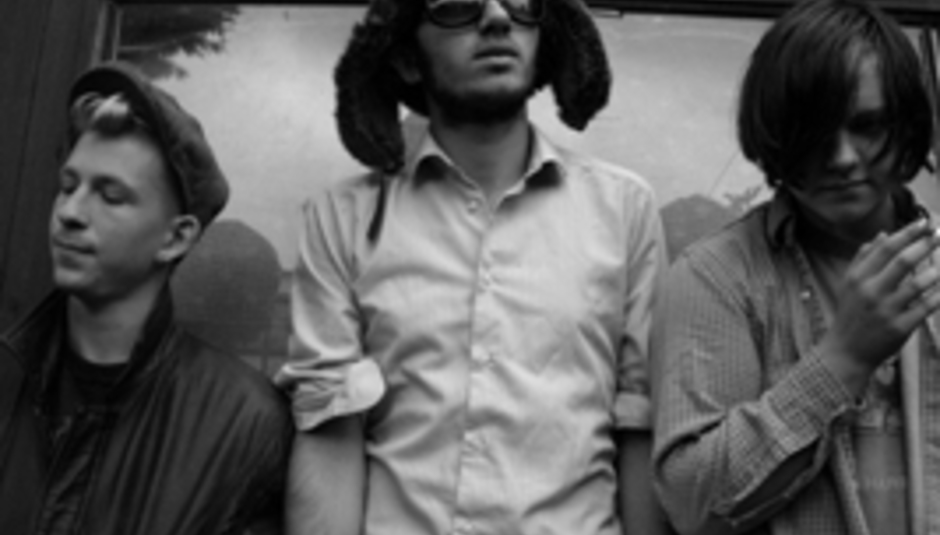 In a dingy pub in Camden, DiS brings its beer over to the table and roots around in its bag for some questions. Three faces look longingly at the drink. Wot, no money? Oh, alright then. We trudge back to the bar to make it a reluctant round. We can’t help ourselves. Who wouldn’t warm to London trio Let’s Wrestle, with their tone-deaf Pavement impersonations and heart-warming tales of quasar, genocide and having massive cocks? Certainly not Eddie Argos, who recently named the lo-fi punks his favourite new band. Light of pocket and heavy of heart, we find out more about these desperadoes of wasted youth.

Before we begin though, names and things: Let’s Wrestle are WPG on vocals and guitar, Mike Hankin on bass and vocals, and Darkus Bishop on drums. They like Electrelane, Swell Maps, Sebadoh, Television, Motorhead, Napalm Death, The Beach Boys, and some other bands that are good. They all love Brian Eno. A single, ‘Song For Abba Tribute Record’, is reviewed here.

Who are you texting?

Mike: There’s this number we found out about, where you can text them any question you want and they’ll answer it. (AQA, I guess – Ed) We asked it how much Princess Diana weighed when she died.

And what was the reply?

Mike: It wouldn’t say, but they did say she had a 29” waist when she got married to Prince Charles.

That’s fascinating. Wes, your lyrics are pretty off-the-wall – how do you go about writing them?

WPG: I get asked about that a lot, but I don’t put much thought into them. It’s just what comes out on the day.

You sound like the kind of guys who listen to more records than is possibly healthy. True?

WPG: I honestly think about nothing else.

I read somewhere that David Shrigley is a fan of your work?

WPG: That was part of some BBC Collective thing, but I’m not sure if it’s really true. I used to e-mail him obsessively, telling him I loved him, and he replied telling me about all these weird websites. He drew us a little man carrying a bag marked ‘babies’ for a gig once. The gig never happened though, so it was wasted in the end.

Your lyrics have that same mix of the utterly banal and the macabre – was Shrigley a conscious template for Let’s Wrestle?

WPG: We didn’t aspire to be like him, it just came out that way. We’ve all grown up with stuff like Vic And Bob, that kind of humour.

Do you ever think you should try harder?

WPG: I think it seems to be working for us. People like the laziness. We just play when we can, we don’t spend time rehearsing or anything.
Mike: It’s just a very half-hearted attempt at making music. But in a good way I think.

What would you do if you suddenly started selling lots of records?

Do you enjoy getting up people’s noses?

Mike: Yes.
WPG: Well, I’ve got this yearning for people to like me but if he says so… we don’t want to be one of these bands that gets fucked by NME. It’d be ace to be like The Fall, where you become really respected but you can still do what you want.

Are you good with children?

Mike: Well I like to think I’m really good with kids, but other people tend to disagree.

How would you set about endearing yourself to a child?

Darkus: Give them a chocolate bar and take them into your car?

Is the correct answer. What’s on the agenda for Let’s Wrestle?

WPG: The new video is going to be us playing in Mike’s bathroom with lots of naked girls, but they’re going to look like they don’t want to be there and neither do we.
Mike: It’s going to be like a Timbaland video. Actually, it’s proving difficult to find girls who are up for it.

Maybe that’s because Timbaland gets a half a mill for his beats and you’ve spent your student loans on stupid text messages about Princess Di?

Mike: If I was a girl I’d rather dance for us than for Timbaland! I’d be like, “I’ve got no money, I owe the newsagent 5p for The Hampstead And Heath Chronicle’…”

Let's Wrestle have a digital-only single, 'I Won't Lie To You', out on Stolen Recordings later this year, with an EP due in the new year. 'Til then, you can check out their nifty tunes on MySpace, here.