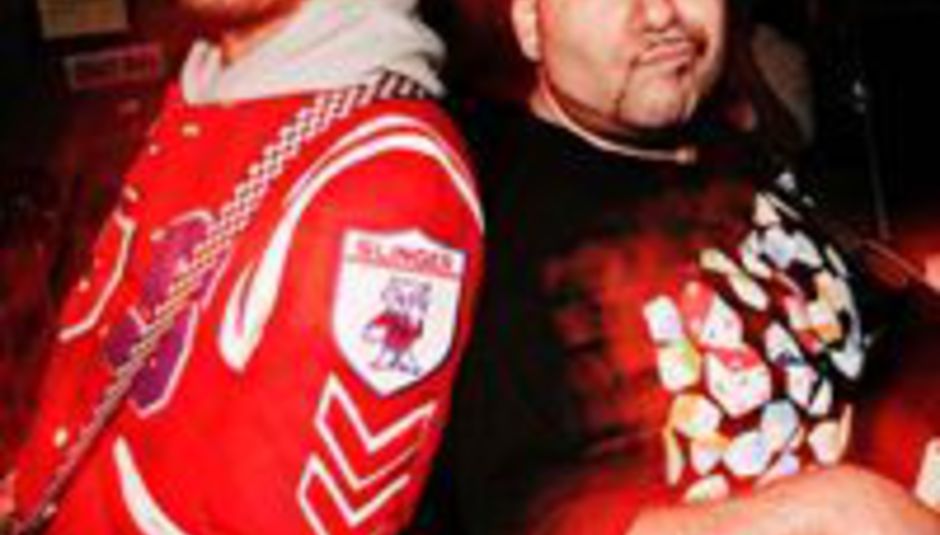 “I like your website – you gave us a good review. Well, the number rating was, like, ‘What?’, but what you wrote in it was great. Ah, it’s cool – I liked the review a lot.”

Dave 1, half of New York/Montréal electro-funk duo Chromeo (Pee Thug is, presumably, laid down somewhere else, watching Trisha or some shit), is talking to DiS from the comfort of his room at London’s K West hotel. He’s in town following the pair’s appearance at the capital’s first-ever Field Day festival, and is sticking around to shoot a video for their forthcoming single, ‘Bonafied Lovin’’. He’s in good spirits: things are kicking off for Chromeo in the UK following the release of second album, Fancy Footwork, their first to receive proper coverage over here.

And rightly so, too – it’s one of this year’s best party-starting records, aligned in spirit, if not execution, with the likes of new releases from !!! and Justice. Says Dave 1: “It’s about time! We’re going for it, as our first album (2004’s She’s In Control) almost didn’t really come out in the UK – the label never really bothered to do anything with it, so this is really our first album here, and this is the first time we’ve had any kind of momentum here, so we’re really happy to be getting what we’re getting, and we hope to maintain this.”

A hard-working ethic should ensure this, and the band’s rising profile is founded on a tour a couple of years ago with indie-rockers Bloc Party (the acts share the same label, Vice, in the US). Continues the vocalist/guitarist: “We toured with Bloc Party around the time of the first album, but for us to get so much attention in the UK is really new, and we’re thrilled to be getting these great reactions. For us to be able to play festivals and shows here – even if the rooms are small – it’s all new, so we’re incredibly happy about that. We want to keep coming here and building the profile, because outside the US this is our favourite territory to play.”

DiS has, so far this year, also encountered the duo’s excellent live show at both Primavera in Spain and Hove in Norway. Just how has the duo adapted to playing such large stages, though?

“You saw us at Primavera, right? We just stay close to each other, and get a lot of smoke going. When the budget gets bigger we’ll bring in more props and more lighting, but people always tell Pee and I that we’ve enough character and personality to carry a show ourselves, so hopefully that’s true.

“People interact with what we say between the songs, too, and I think that’s almost like a rap thing. The way we talk to the crowd is quite unlike most electronic acts. I think there’s something more modern about what we do, that some people don’t see, and I’m glad you see it too.”

Indeed, those categorising Chromeo as revivalist, evoking the twin spirits of Hall & Oates and Rick James (is that not three spirits? Whatever…) are missing the contemporary aspects of the band’s in-the-flesh execution of their hip-swinging songbook. Sure, like many acts around they call upon outfits previous for inspiration, but they’re acutely aware that mere recycling of once-successful approaches will reap little reward. Chromeo are a band with progression on their mind, and while their steps onwards and upwards might be of baby proportions when compared to out-there acts like Liars, et cetera, their momentum is building for a reason: they are quite unique-sounding in 2007.

But not everyone heard Fancy Footwork as the no-nonsense party provoker it was. Says Dave 1 of the album’s critical reception: “NME review aside, it was all good. They gave us a hard time, but that’s cool, as now they want to do more stuff with us. You’ve got to play a bit of a game with these people, and we expect not everyone to get us, and we’re cool with that.

“When our first album came out we were upset that people thought we were being ironic, and that perceptions of us didn’t match what we thought of ourselves. These days we don’t care about that so much: we just want people to enjoy the music. If they derive any kind of enjoyment from what we do – whether their opinion is that we’re a comedy act and they want to laugh at us – then that’s cool, and I don’t care about their specific thoughts. I mean, I laugh at a lot of music that I like, too – I loved gangsta rap, but I don’t take all that 100 per cent seriously. I mean, I take Brian Eno seriously, but I don’t actually listen to his music much – that’s the downside. I’m actually unaware of what he’s done musically for years.”

Something readers might not realise about Chromeo is that Dave 1 – real name David Macklovitch – is working on a PhD in French Literature at Columbia University. He also teaches French to undergraduates at the same institution. How does he balance the band with these academic demands?

“I’m still doing my PhD, but this summer is a break from that. That’s the choice we’ve made – it’s important to both Pee and I to have our own personal lives, outside of Chromeo. Pee is, like, the accountant for Pop Montreal, a big festival we have in Canada. Those sort of things are important to us. I also still teach – I think some students are aware of the band, but I don’t really notice it. I think that they know the music, but they don’t bring it up in class as it has no place there.”

And what’s forthcoming for the band for the remainder of 2007?

“We’re shooting a video for ‘Bonafied Lovin’’. The ‘Tenderoni’ video made a slight reference to a-ha’s ‘Take On Me’, and this new one is going to reference Dire Straits’ ‘Money For Nothing’. To me, those are two defining videos, and I’m pretty sure a lot of our fans don’t know those videos. If you’re 17, you’re not going to remember them. A lot of this new generation get a kick out of discovering old stuff like that through us, and that’s really who we do it for. I remember when I discovered funk music, and how cool I thought it was. I remember seeing Wild Style for the first time, y’know, and bands like Beastie Boys and A Tribe Called Quest helped me discover that type of music in the ‘90s, as a teenager. We hope to be one of those bands for kids today. Beastie Boys were the coolest when I was 15, and they helped us through all their references to other stuff, stuff that they would namedrop – they helped us get familiar with ‘80s New York. In a way we would like to do that, to kind of have kids listen to ‘Tenderoni’ and then listen to Bobby Brown, y’know? That’s cool! We want to usher in that research, and be something of a portal.

“I’ve got time enough to do both the band and school this year, and we’re really not through with doing the UK just yet. Not at all. We’re going to keep coming here all year, so that hopefully next year we’ll get good slots at festivals. I mean, we’ll take whatever we’re offered at the moment – although I think currently we’re a little underestimated, as was evident at Field Day when we filled up the tent – but we’re gonna do a proper UK tour in October or November, with a proper London show somewhere like the Scala. That’s what I’m thinking, y’know. You’ll hear from us! Then there’s the new single, and remixes lined up… we’re just starting, really! And you know how you guys do it in the UK: you re-release and then you re-re-release, like New Young Pony Club style. Well, we’re about to come back out with ‘Needy Girl’, and we don’t care! Why not, man?! The UK’s the only place where we can do that, so we’re gonna take advantage of it. You’re the only people who still care about singles, so we’re gonna release all kinds of singles!”

Fancy Footwork, the album, is out now via Back Yard/Vice. ‘Bonafied Lovin’’ is due for release on October 22. For more information click through to the band’s MySpace page, here.