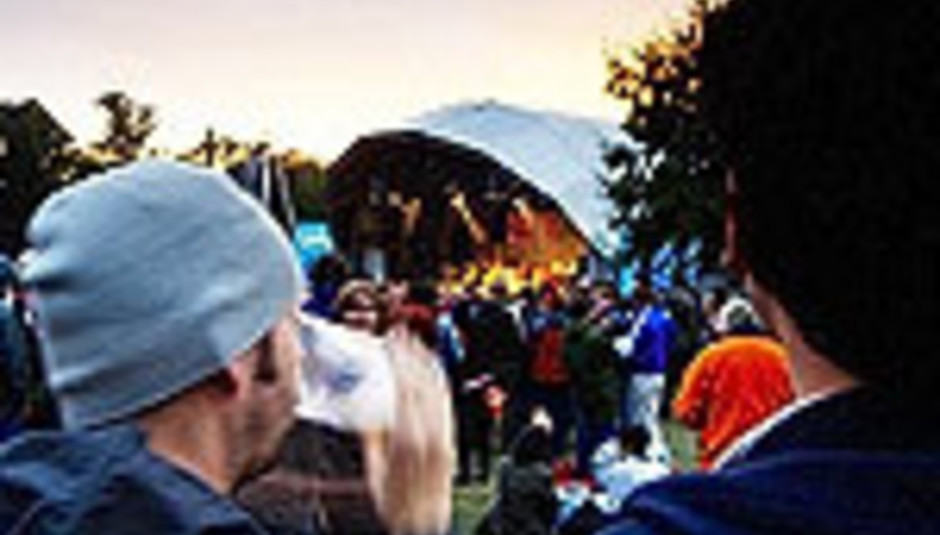 Civilised isn't an adjective you'd normally expect to read in a description of the atmosphere at British festivals. Sure, the likes of Green Man and Bestival promise a more laid-back vibe, but neither can compete with Leicester's Summer Sundae in terms of just how well the event works as a whole.

Due to the small scale of the site, queues are practically non-existent, by the end of the weekend the campsite toilets are still (mostly) usable, and the standard of catering is undoubtedly the best of any UK festival we've had the pleasure of visiting.

Unfortunately, a mix of work commitments, travel problems and technical difficulties meant that the fun began late Friday night and Saturday afternoon respectively for the DiS team of Rob Webb and Jordan Dowling - but once they got on site, there was plenty to see, do and hear...

Complete commitment, true craftsmanship and not a minute wasted. We're talking, of course, about the expert manner in which we erect our tent late on Friday evening. The band soundtracking said erection (!), on the other hand, are The Divine Comedy and there's probably nothing on the planet this DiSser despises more than Neil Hannon, his motley crew and the self-indulgent tripe they pass off as 'music'. Even from a distance, they are utterly abominable. RW

Kitty, Daisy & Lewis look young. So young, in fact, their parents are probably onstage with them as much to satisfy some legal obligation as to provide musical assistance. Certainly, you'd imagine their bustling folk-blues draws more inspiration from Mr and Mrs KDL's record collection that it does from, say, Radio One - echoes of classic artists ranging from Johnny Cash to a multitude of names prefixed by 'Blind', 'Howlin'' and 'Lightnin'' make this a highly entertaining if, due to the sheer precociousness of this talented trio, slightly baffling half an hour. RW

Wild Beasts are going to be one of those Marmite bands - you'll either love their quirky charm or despise that godawful caterwauling coming from the mouth of frontman Hayden Thorpe. For DiS's money, we're firmly on the former side. With tunes as good as 'Through Dark Night' and as brilliantly titled as 'Brave Bulging Buoyant Clairvoyants', they're certainly an act worth keeping an eye on - especially when Thorpe does his 'strutting peacock' dance. Special, in a multitude of ways. RW

Although Mancunian gurn-rockers The Whip fail to ignite during their early evening set on the Rising stage, there's enough here to suggest that on another day, with a little more intoxication, they might be able to spark scenes of tent-based carnage. Right here, right now, they're a fair distance behind !!! as the premier dance band of the weekend. RW

Maps seem to be kicking up quite a storm recently, heralded for their 'unique mix of electronica and shoegaze'. That none of these heralders have heard M83 is an (unpatriotic) shame, but Maps blend the two genres almost as well especially on forthcoming single 'You Don't Know Her Name', a sparkling concoction of hushed vocals and digitally treated walls of white noise. JD

To the main stage, and The Rumble Strips seem to have lost their way a bit. Maybe our tastes have changed, but a year ago their joyous brassy (not Brassy, though that would be infinitely better) pop was a delight to our ears, a summery treat to enjoy like a cornet of Mr Whippy's finest. This afternoon, though, Charlie Waller's voice grates and they're more like an overdose of candyfloss - sure, the first bite tastes good but, ultimately, you're left with pink teeth and a stomach ache. RW

Sophie Ellis Bextor seems somewhat of a sore thumb on the line-up, but what with the relaxed, almost jovial atmosphere of the festival she fits in well. Throughout her career she's maintained a reasonable level of success without ever truly setting the world alight, and her set here is the same: enjoyable when experienced passively, but nothing to really appreciate and commit to, despite her on-stage enthusiasm. JD

Low are a different proposition: no gimmicks, no stage show and hardly any communication with the crowd, yet still they steal the festival. On an off day, missing out many of their most popular tracks, they still captivate an audience like very few other bands do, and whilst they have moved on from the mirth-soaked slow-core of their earlier days they remain ever beautiful and unmissable. JD

Maybe we let the cat out of the bag earlier, but !!! are one of those bands who just seem to get more and more compelling with every viewing. Frontman Nic Offer's ADD-afflicted stage presence has something to do with their live appeal, but it's as much down to the insistent, funky basslines and driving guitars emanating from the amplifiers behind him. Another positive about watching their set is that we get to miss The Magic Numbers - bonus. RW

One of the many good things about festivals is the possibility of unearthing promising new bands (that is, new to you) to investigate fully once you get home. Pacific Ocean Fire are our unexpected treat of this year's festival, sounding as they do a bit like an English Bright Eyes circa Lifted - ideal lunchtime fodder, and the spots of rain do nothing to detract from their appeal. RW

Okay, so we're not quite sure why The Strange Death Of Liberal England insist on using an array of painted signs to communicate with their audience, but we are certain that they're really rather good. Last time we caught them at a small club show, it was solid if unspectacular; this afternoon in an oversubscribed tent, it's nothing short of magnificent. Singer/mentalist Adam Woolway looks and sounds seconds away from nervous breakdown, and we like that. Post-rocking, Arcade Fire-inspired indie noise? We love that. RW

For all her inherent cuteness, Stephanie Dosen is a bit scatty. It's good to talk, Steph, but not when you've only got a limited amount of time to deliver your heartfelt acoustic-folk loveliness. 'Only Getting Better' goes the chorus of her best tune, and the girl's not wrong - but less of the inane banter, if you wouldn't mind. RW

Seasick Steve is something of a quandary. His delivery is empowering and his storytelling second to none, but at a time where the most popular 'indie' acts are derided for wearing their influences on their sleeves he offers absolutely nothing new to the Delta blues format and openly relies on 'gimmicks' (his words) such as a three-string guitar. Still, he is keeping alive a great tradition and any accusations of unoriginality come long after the set draws to a close and are, in the end, fruitless. JD

"You're all so polite!" remarks head Pigeon Detective Matt Bowman with an air of disappointment; it seems to be perturbing him that Summer Sundae isn't going totally ape-shit for his band from the word go. Still, they get there in the end by virtue of having nothing in their set list that doesn't resemble a top ten single, and through Bowman's ability to work even an initially disinterested audience up into an early evening frenzy. RW

We venture indoors to find Gruff Rhys on typically fine form, playing his latest solo album Candylion more or less in its entirety. An extensive array of children's toys and other noisemakers punctuate his distinctive, dreamy sound and characteristically surreal lyrics. Coupled with the 3D ‘Candylion TV’ backdrop and aircraft seats adorning the stage, this creates a unique and enjoyable live experience. His final trick, the album's closing track 'Skylon', is an epic 20-minute (!) yarn of love and bomb disposal spun by Rhys to sound like a bedtime story. We leave with that warm, peaceful feeling only the best summery pop can provide. RW

Alberta Cross go down a treat in the hot weather. Falsetto vocals drag along lazy guitars and brushed drums through alt-country soundscapes eerily close to those on My Morning Jacket's It Still Moves opus. The tempo is raised for previous single 'Lucy Rider' but for the most part the band operate at a BPM just above the pulse rate without losing any focus. JD

And as the sun shows its first signs of lethargy the Spiritualized Acoustic Mainlines ensemble take to the stage. When looking back it's usually the most recent memory that is the most vivid and the Summer Sundae organizers ensured rose-tinted nostalgia with the perfect festival closer. Playing a mix of Spacemen 3 and Spiritualized tracks Jason Pierce, accompanied by Doggen, a string quartet and small choir, leaves the entire audience in a state of holistic ecstasy. Many palms touch for merely a blink of an eye, but the spiritual energy is purely undeniable, even if some members of the crowd do turn to idol worship, with the relief that the exemption of the walls of noise that used to back J Spaceman's slow-burning hymns has done nothing to negate their power. JD

On a weekend where several other events have been criticised for their lacklustre organisation and poor atmosphere, Summer Sundae was a triumph in both respects. The team seem to have found the perfect formula for a great festival, and DiS is impressed. This is our second SS experience but we're already planning next year's sojourn to De Montfort Hall - it's a keeper, for sure.