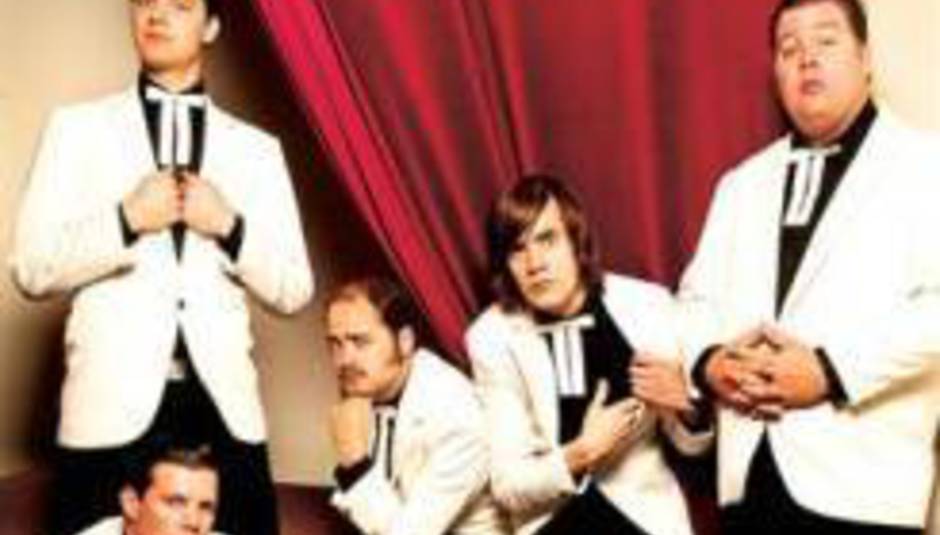 Six years on since Alan McGee saw fit to unleash The Hives on an unsuspecting UK public with the gold-selling compilation Your New Favourite Band on his now-defunct Poptones label, the Swedish garage-punks have released a strong third album proper, Tyrannosaurus Hives, in 2004, and are back after a three-year hiatus with a new album, allegedly due in September. DiS speaks to guitarist Nicholaus Arson and Vigilante Carlstroem about perfect records and Maroon 5.

I suppose the last thing fans have heard from you was your collaboration with Timbaland on ‘Throw It On Me’. How did that track go down with your fans?

Nicholaus: Some think it’s good, some think it’s bad. It’s more that we play guitar and sing on one of the songs, it’s not really a collaboration. If there was a reaction it was probably a fifty-fifty one. You kinda judge it by the number of people that come up to you and say hey that was great, usually the people who think it’s not great won’t tell you that [whereas]... people are fucking negative on the internet.

Vigilante: But it’s usually like the same ten people on every guestbook.

Timbaland ft. The Hives, 'Throw It On Me'

Word on the street is the new record’s going to have more of a dance / hip-hop feel to it. True?

N: Not necessarily. I mean, we’ve recorded songs with Pharrell Williams, Timbaland and Jacknife Lee. We did like seven tracks with Pharrell and hopefully there’ll be a couple on the album.

There was a rumour circulating which has since been scotched that the new record would be called The World’s First Perfect Album - how did that one get out?

N: That’s more of a fact (laughs). That’s more what the record is, but the title will be a different one.

Do you think perfection is a reasonable goal to aim for?

N: Yeah, ‘cos you never really achieve it but you have to aim for it anyway; like we’ve had records where we’ve come within 95-96 per cent of them being perfect, but it’s really hard. There’s always stuff that you can’t really control. I mean we’ve released like three full-length albums in 15 years!

Is that ‘cos you’re perfectionists?

N: I think so. We have a principle against recording or writing while on tour, so we make a record and we tour for a year-and-a-half, maybe two years, or like with the second record where we toured for three years without doing anything. This record is different though, we have at least 20 or 30 songs and we never normally have that many. We always hated bands who would just release records to be on tour, like ‘yeah we got get a spring tour going, we gotta release a record’. With us, it’s like every record we make feels like it’s the last, it’s pretty much felt like that since the first record. ‘Cos you put so much into it that you’re exhausted after recording, it’s like ‘do we really have enough energy to tour this one’.

Things really took off for you guys in this country with bands like The Strokes and The White Stripes as part of the whole ‘new rock revolution’ thing – do you feel the need to prove your continued relevance as a band in 2007?

N: The thing is we were part of so many scenes and we never really belonged to any of them, like the Swedish garage scene or the melodic hardcore scene or whatever, so we didn’t necessarily think of ourselves as part of the ‘new rock’ movement... But you always feel the need to prove yourself, whether it’s to yourself or anyone else. I think that’s where the perfectionist thing comes from, otherwise we could just make records and be happy with them. It’s like you wouldn’t go off and record in the middle of the night unless there was something driving you... You discover after a while that music has to be your favourite thing to do – whether it’s something you’re conscious of or something you realise after doing it for fifty years - since you do it pretty much 365 days of the year. It’s like we were supposed to have last year off but instead we made a record.

Some fans have responded less than enthusiastically about your decision to tour with Maroon 5 in autumn. How do you react to that criticism?

N: Yeah, we’re getting shit loads of crap for that on our website. Again it comes back to that thing that we don’t belong to any scene. When we were a garage rock band we were playing with punk bands who were way more popular than us, so we were playing to way more people than would have come to see us otherwise. We always wanted to play to lots of people – we never compromised on what we were doing, but we were trying to do it for more people.

V: Also it’s fun to play to a crowd that’s never heard of us and try to win them over, and I guess that’s the biggest reason we do it. Like the last tour we did was a headline tour and it’s fun and it’s easy ‘cos people love you when you walk on the stage but I guess we felt like we needed a challenge.

N: Sometimes it’s the hunt for the prey that lures and not the trophy.

V: We’ve always enjoyed having as many enemies as fans. It’s good to annoy people, if everybody loves what you do it’s good but... I feel it’s more healthy to piss people off.

N: It’s like this (he is indicating Dire Straits, whose 'Money For Nothing' is playing in the background))... if you were DJing at a punk club and you put this on, well that’s fun.

Is it true that you’ve recorded a song, ’Footsteps’, for the new Raconteurs album?

N: No that’s not true. Pelle did record footsteps for a track but it wasn’t a proper song, it was just Pelle walking in a room. I met Brendan Benson yesterday, and now we’re trying to talk him into putting a song called ‘Footsteps’ on the record. I think maybe we’ll deny it until the record comes out and then it’ll appear on there.