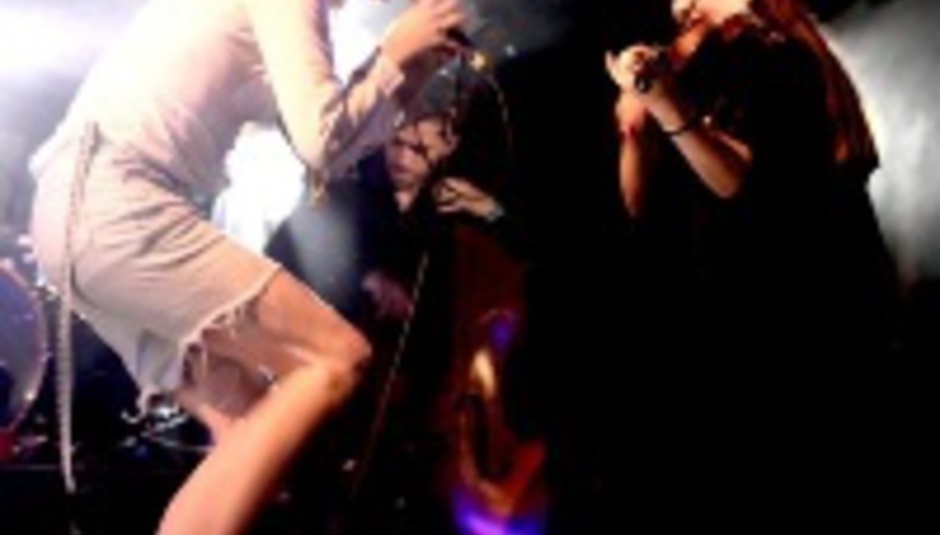 Latitude has swiftly become a deep-rooted fixture on an ever expanding festival circuit, offering weary Glastonbury revellers an opportunity to recharge under the Suffolk sun and various meeejia folks the chance to check out a series of fine adult-orientated headliners without too many screaming kids. You know, the sorts that actively roll in muck and tongue each other for photographs. Ergh.

This year’s event – three days of good weather, fine beer and excellent company – took place from July 13 ‘til July 15, mixing musical attractions with a healthy dose of comedy, poetry and theatre, set against a stunning setting. DiS dispatched a handful of critical sorts to Henham Park, in Southwold, and asked them to select their personal standouts. After all, if it’s simply a list of participating acts you’re after, you could just click to the Latitude website, here. If you liked.

In no specific order, then…

I'm From Barcelona
I'm from Barcelona are ridiculous. Dumb, even. Twenty-nine people singing Technicolor major-chord songs with little meaning. But, by bloody blimey if they're not the most fun you'll ever have. Emanuel Lundgren and friends play the Sunrise Arena (in the middle of the woods) and you can't see a thing except for hundreds of balloons bobbing up and down and one DiS writer dancing like an uncle at a wedding. It's joy squeezed up, mixed with cider and sprayed around the room in the form of liquid melody.
MySpace

The Whip
The Whip are missing their keyboard player. Half of their sound is pumped over the PA. There's hardly anyone here. Never the mind, as they're bloody brilliant. So brilliant, in fact, that their electro-rock-clash draws in people from the lovely Suffolk sunshine. Recent single 'Divebomb' goes on a bit as the band admit they don't know when to finish it without keyboardist Dan, but it's such a good song that the now bubbling crowd couldn't give the proverbial hoot or two. It's about time Manchester produced another great band…

DiScover act: Sunset Cinema Club
There's not much in Redditch that's good. A couple o' roundabouts perhaps, a nice pub or two in the outskirts and that's your lot. Well, no more! Sunset Cinema Club sing noisy whippets of yappy future punk. And they sing it well. Alright, playing their first-ever festival slot in front of an apathetic crowd of sunbathers might not quite suit them, but stick them in a sweaty West Midlands bar and then we'll be talking.
MySpace

Annuals Saturday begins well with a set from the much-hyped American six-piece Annuals. Those Arcade Fire comparisons? Spurious, as it happens. They may have four percussionists at some points in the show, but today, at this moment, Annuals are very much their own band. My only complaint from their Be He Me-heavy show is that they manage to keep me enticed for the whole length of their set and, as a result, I suffer horrible sunburn. The shits…
MySpace

Final Fantasy
Owen Pallet, aka Final Fantasy, plays solo to a stunning wooded backdrop. The violinist from ‘that band he’d rather not mention’ manages to overcome the tricky hurdle of replacing the full-band sound of 2006’s He Poos Clouds with some ambition and a trusty looping pedal. He breaks out ‘This Lamb Sells Condos’ and ‘Do You Love’, before performing a wonderful cover of John Cale’s ‘Paris 1919’. His set ends abruptly, but it doesn’t matter – everyone is making their way towards the main stage to get a good place for the best band in the world, Arcade Fire (who, as an aside, manage to move the crowd to levels of religious fervour and, for that, they deserve all the praise they get).
MySpace

DiScover act: Vessels
One of the great things about wandering around a festival of this size is the opportunity to discover new bands that you wouldn’t bother checking out on the internet. A good example of this is Leeds–based quintet Vessels, whose ear-smashingly awesome guitar crunches are more suited to the expansive festival stage than the constraints of a shoddy 4-track demo. The combination of unpredictable math-rock structures and steadfast post-rock manoeuvres a may sound irritatingly contrary and self-indulgent on paper, but in a live setting it rocks. You can guarantee you’ll be reading a lot more about Vessels on these pages in the near future.
MySpace

Noah and the Whale
Every time I see Noah and the Whale I leave with my little heart a fluttering. Each time, a burning question of "Do you think they will let me join?" lingers. Not that they could possibly need me, but just because they play music with such tangible threads of enthusiasm and humility and reality – and, essentially, they have avoided any of the possible trends you could leech a new band on to, and cut to the chase of melodic mastery and frank, open delivery. Their violinist (who we see earlier in the weekend playing with Emmy the Great) provides the flourish to their sound, playing the fiddle without ever letting it sound emotionally overwrought, as is the usual trap with the instrument.
MySpace New Young Pony Club
Setting is everything. Now night has fallen, the sunrise arena, lodged away in a clearing of the woods, has started to feel like a hidden cave. Packed out with people, the proximity of the dense woodland to all sides gives welcome claustrophobia, the sense of a packed out party. 'Ice Cream' and 'The Bomb' sound so much more intense than on record, and the crowd are barely under control, pushing and pushing at the barriers to get closer to the sounds that lead them on. Vocalist Tahita is the star of this event. She has become the woodland nymph and darts between rays of spotlights and shadows of trees, in and out of sight she leads us on into the night.
MySpace


DiScover act: Slow Club
Having missed my original train out of London and lugging my excessive amount of luggage over what seemed to be several miles across a damp field, my first thoughts would usually be of eating, resting and recuperating. However, I knew that Slow Club were playing in a matter of minutes, so it was a case of throwing the tent together and gallivanting off down the hill to see the wonderfully cacophonous acoustic two-piece, camera swinging from my hand. She, Rebecca, has the strident voice and plays the milk bottles; he, Charles, lets his voice intertwine and has an arresting way with the guitar. Twee they may be, but it's a joyous, inclusive and not one little bit sickening type. There was no way I was going to miss them, and you shouldn't either.
MySpace Bat For Lashes
Natasha Khan and her cohorts, maybe unexpectedly, step up to a lofty billing on the main stage. Wearing a skeleton-emblazoned cat-suit and, despite having to deal with a few minor technical difficulties, she and her troupe of femme fatales deliver a powerful performance. Indebted - perhaps a little too much - to Björk and PJ Harvey the Mercury-nominated four-piece may be, but it’s hard to mark down good taste. One in the eye of lad-rock.
MySpace

Gruff Rhys
The Super Furry frontman is quite simply the act of the weekend. Criminally underrated in both his group guise and now as a solo performer, he is in parts folksy, experimental and comedic. Gruff plays solely from his latest stellar album Candylion, but live looping, sonic adventuring and a 12-minute ‘Skylon’ performed in a pilot’s uniform and on airline seats keep him constantly mesmerising. And, for the record, the children’s TV-inspired stage set is by far the best of the festival.
MySpace

DiScover act: Jeremy Warmsley
Jeremy Warmsley captures the spirit of things. Performing in the woods and given room to fly by an achingly good backing band, magnificent vibrations drift through the trees, drawing people to the source. Surreal and more than a little special, the once flimsy Warmsley is flexing previously unrealised muscles.
MySpace

Patrick Wolf
It's great to be an unpredictable star, but so many times I've gotten excited about seeing Mr Wolf and then gear doesn't work or he just doesn't appear to want to be there. This show, however, was totally different. He parades around the stage dropping re-worked versions of early tracks, glittering and preening out their once-murky edges. As hands punch the humid tent air to 'Bloodbeat' and the dancing onstage and off gets, well, freakin' frankly. Patrick proves he’s an anti-pop star in waiting, and really could be our generation’s Cliff Richard. DiSsers leave with dumb grins to hug trees.
MySpace

Friendly Fires
On paper, Friendly Fires don't sound so good: Rapture-y anthems + Hot Chip looseness + Kooks hooks + bassy !!!-isms ÷ teenage suburban Brits = meh! The sum of these tightly-honed parts however is alarmingly catchy, so much so I’m not beyond putting a bet on them being the band of next summer.
MySpace

DiScover act: Dockers MC
This newcomer steps up onto the poetry stage with a hoodie and a wide-eyed stare. I’d heard rumblings that she's rather special, and as she begins a hilarious stalker-penned ‘letter to Rolf Harris’ skit, it's clear this Brixton gal has a lot between the bullet holes.
MySpace