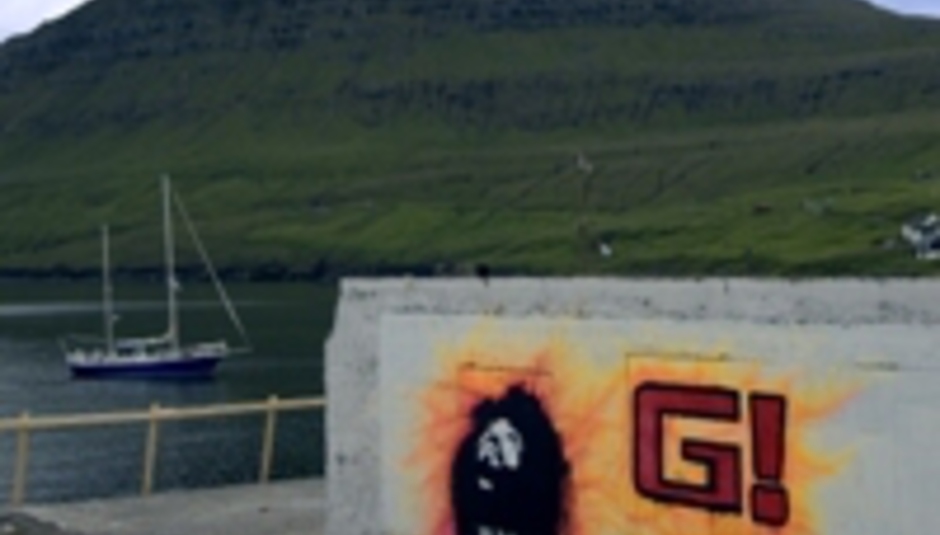 I’d say a solid 80 per cent of people out there – well, at least those who never studied their home atlas for a weekend – have never heard of the Faeroe Islands, let alone know where the 18-strong archipelago actually lies. I’ll confess to a little ignorance as well, as when I received the assignment to cover the G! Festival in said isles, I thought I was going to a British protectorate south of Argentina recognisable only by mention in a Simpsons episode. Wrong.

Two hours north of Stansted is a mini-culture, a 48,000-strong chunk of Danish colonialism sweating for independence. In an attempt to promote local Faeroese music – and yes, there’s lots of it – and remind the rest of the world that they exist, the town of Gota, population about 1,000, turned into a music festival fairground for three days, supporting a slew of local talent alongside a smattering of international bands. Eclecticism is the ethos – for example, organisers stick Natasha Bedingfield and thrash metal outfit SIC on the same bill – and the whole event is staged in one of the most remote and beautiful parts of the world.

The Faeroe Islands are stunning, awash with treeless mountains, bright blue fjords, beautiful women and an air of relaxed simplicity. G! is a different kind of music festival – although the musicians comprise the key draw, the fact that I’m in a place built for postcards has me more in awe with my surroundings than any music coming from some stage or other. Some bands prove to be ace, some rubbish, and most don’t matter. Being whisked around as if part of a live-action Idiots Guide to the Faeroe Islands trumped any band, making the G! Festival more than the standard music and camping combination. The most impressive acts are far and wide the ones who travel the least to play. Gota’s own Boys in a Band expel a slurry of new wave-informed synth glee, impressing a lot on night one alongside Denmark’s Nephew, political-punk quartet 200 (imagine a Faeroese Sex Pistols) and masturbatory Icelandic tech-kids Ultra Mega Techno Band Stefan (pictured below). Nephew have a song called ‘I Wanna Be Darth Vader’, and it is their only English language tune. How ‘bout that? The rest of the evening is spent relishing the scenery and cutting out as much of it as possible to take home, and filling up on gin and jolly. As noted, much of the music was passable. But, again, this is a festival that uses music as a conduit to promote the location. At least that is how it feels. Day two is a lubricated mess of booze. To begin, this lovely culture has devised a mixer called Seamen's Shot, consisting of a dissolved Fisherman's Friend and vodka, as their wake-up drink of choice. Sound. After a few shots, the morning is spent touring around the Faeroes, ferried around by the tourism council to visit Torshavn, the smallest capital in the world. More boating and walking is followed up some traditional Faeroese food - fish, fish and more fish. Being a vegetarian, I load up on bread, scoff at the whale on offer and remain hungry all weekend, possibly explaining the 72-hour bender the G! Festival abetted. Is it because I’m not eating properly? Makes sense to me.

I return round midday to a buoyant boozing session with my rowdy Viking neighbours. Great folks they are; one even won a Fan of the Month for Blackburn Rovers. He moved to northern England and took a menial job to support the club, so they gave him a trophy. I pause to take a picture with it – fun times – but consequently miss Petur Ben, who apparently delivers one of the best sets of the weekend. I ultimately settle down for some distortion and growling courtesy of Oslo’s Serena Maneesh and local thrashers SIC. Both command the stage fiercely, and both are very loud and tighter than a sailor’s knot. Yet, mediocrity creeps in halfway through their respective sets, as the repetitiveness of such manufactured ardour proves transparent. Metronomy are next, and they impress brilliantly. Combining an esoteric, Super Mario-influenced blend of dance, techno and electro with choreographed stage moves, shirts with light bulbs on them and keyboards a plenty, the band recreates a sweaty club atmosphere despite the sun shining as brightly at nine in the evening as it was five hours earlier. Most bands sound better at night, but here it gets dark for about an hour, max. Add that to the list of reasons why I get so pissed. Natasha she wants to have your babies Bedingfield follows. If I was not on a schooner (that’s a boat for any landlocked sorts) with a Faroese beer in hand, surrounded by smiles, she might have been well upsetting to listen to. Saying that, I couldn’t care less who was playing: I was on a schooner. Returning to land after her set, I float to the DJ stage, once a burnt-out fish-salting warehouse, for a night of dancing with Metronomy, Lucy Hill and DJ Nettie. Someone spins Huey Lewis and the News and mixes it with The Monkees. Seriously surreal. Another sleepless, bright-as-day night is endured.

The final day promises the most musically, featuring the most eclectic showcases. Eivor, a songwriter from Gota enjoying a huge profile in the Faeroe Isles, begins the evening, rolling through an adult contemporary set of Celtic, old wave and new age fairy tales. While A bit too Enyaish for me, the locals lap her up like dried whale. Stockholm’s Loney, dear (pictured right) follow and are gorgeous – lead songwriter and vocalist Emil Svanängen’s syrupy singing matches the scenery perfectly, double-icing this already sweet cake of a music festival that all are gorging on. Hatesphere and their Scandinavian hair metal are next, on the same stage, and deliver a set that’s entertainingly amusing. All I can think about during their set is Pantera – not sure, still, if that’s a good thing, but funny it certainly was. Sadly, the live-band portion of the festival is brought to a climax on the sandy main stage by Guillemots. On an island inhabited by hoards of Guillemots – they are the seagulls here – four more seems unnecessary, and disappointing. The band’s Through The Windowpane album is a luscious pop affair embellished by emotive, grasping song structures, but live they muck it all up. ‘Annie, Let’s Not Wait’ is buttressed by an odd and needless disco beat, for example, while the complexity of their stage set-up produces a muddy, irked sound. All the intricacies apparent on their album dissipate, leaving nothing but a mess behind.

Post Guillemots, more dancing is enjoyed ‘til the sun sets only to return on the horizon 45 minutes later, making the morning after a bitch. Regardless, G! provides one of the more uniquely glorious festival experiences round. The scenery is gorgeous, the locals are arguably the most hospitable and kind in Europe, and the eclecticism of the bill is impressive. Watching whoever on a sandy beach in the middle of nowhere, fighting a 2am sun amidst vast, picturesque fjords, green mountains and turf-topped houses can’t help but render any band brilliant by default.

Learn more about the G! Festival by clicking to its official website, here. All photography by Richard Smith.