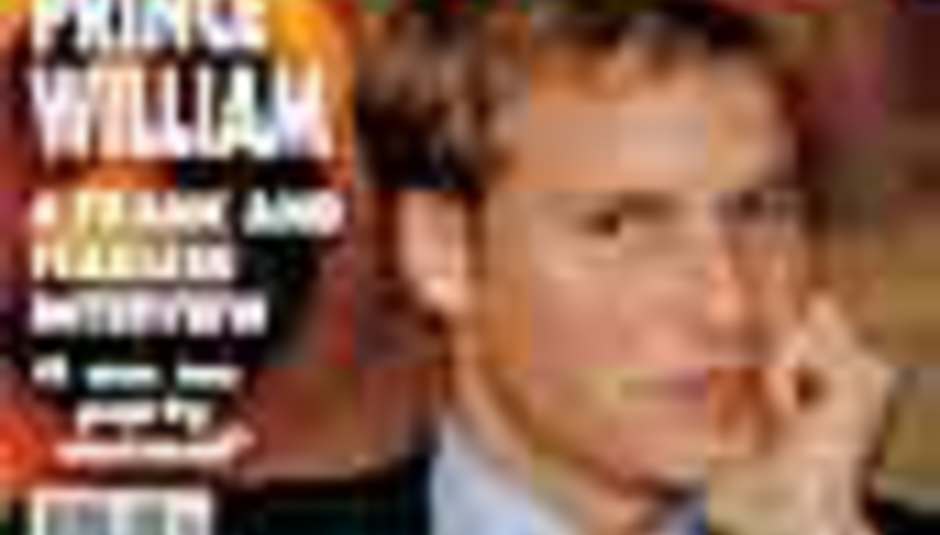 by Joe Wisbey September 28th, 2001
Celebrities. Now, apparently, they dominate our culture as never before. Ask a 14 year old to name five countries and their capital cities, and they'll look at you, smile, and go back to sending their text, or should that be "txt" message. Ask them to name five pop bands and their lead singers, five TV chefs, five women who've had sex with Chris Evans to sell records, and they'll tell you without some much as a flinch. And yet many of these people who achieve fame, fortune, and easy sex, deserve none of it. They are, believe it or not, nought but talentless fools. Here, I hope to expose and shame these show voters. They come, by the way, in no particular order.

We begin with a fall from grace. Once a fantastic, innovative, intelligent Radio and TV star, he's now sunk to marrying stalked ex teeny bop stars, for seemingly nothing more than a laugh. As for his talent, did you see those final TFI Friday's? The appearances from Sting and Nell McAndrew? A long way from Shaun Ryder telling us Patrick Cox is a "Fucking good designer" at 6 in the evening.

I'm sure he's very good at cooking, but so is my Nan, and as far as I'm aware, her TV career stands at, well, nothing. But here is a man who got bullied at school, not for being black or camp, simply for being an utter twat. Even the teachers would stand there, demanding answers for questions like What rhymes with Orange??. His personification of Pepper and Salt also does nothing for me.

As I have no life, I spent my Friday evening last week watching a Jim Davidson live from some shitty theatre stand-up thing. I realised that he wasn't funny. And as far as I know, the basic qualification of any comedian is that he/she has to be funny. He makes unfunny jokes about Mother in Laws, unfunny jokes about people with Dreadlocks, and unfunny jokes about the fact that he's been married five times. And was an alcoholic. And he had a mullet in the late eighties. And he entertained the troops during The Falklands.

For about an hour during 2000, he was the most important man in the country. His dramatic fall from grace on the then-good Big Brother made for classic TV. But the video, the book, the game show, the appearances at GQ magazine showbiz parties, and the time spent as a team captain on Boot sale Challenge, is clearly pushing it a bit. Whatever happened to Anna, I say.

OK. I'll admit this. In my younger days, like last week, I masturbated over Jordan. There IS a need for violently large breasts, and an arse like two peaches wrapped tightly in cling film in this counry at the monemt. What there is NO need for however, is the longing to be seen at British film premieres. The longing to get extremely drunk, be ill and stagger out into her car, with The Daily Sport photographers just waiting to snap away. Of course, the inivitable pop career is on it's way. Can't wait for the video, mind....

He's a quite stunning footballer. He can do things with the ball on one leg that others can't do on two. But then he opens his mouth. His attempts at Scouse wit range from, the "sorry, say again?" brand of humour, to the "pour bleach down his mouth" range. The fact that women want him, despite looking like a 13 year old and wearing, shall we say unflattering shorts, also frustrates me. And he fact that he's earning £18 million over 5 years.

I'll accept the Broom Cupboard. I'll accept Going Live. By God, I'll even take Scofield's Quest. But I won't take The National Lottery Winning Lines. That is after all, Simon Mayo's dirty washing.

I have a regular fantasy. I'm the presenter of the Radio One Breakfast Show. I get 17 million listeners each morning. I am awoken from this dream by that screeching, grating Northern accent of Sara Cox, banging on about her breasts, her wee, her friend Sazzle and flirting with that newsreader. Her refusal to play basic guitar music, and instead play "Castles In The Sky" by Ian van Dahl every millisecond and instucting us to buy it "or she'll get the boys round" something that DLT would have chucked out because it was too tacky, also makes me want to set her on fire.