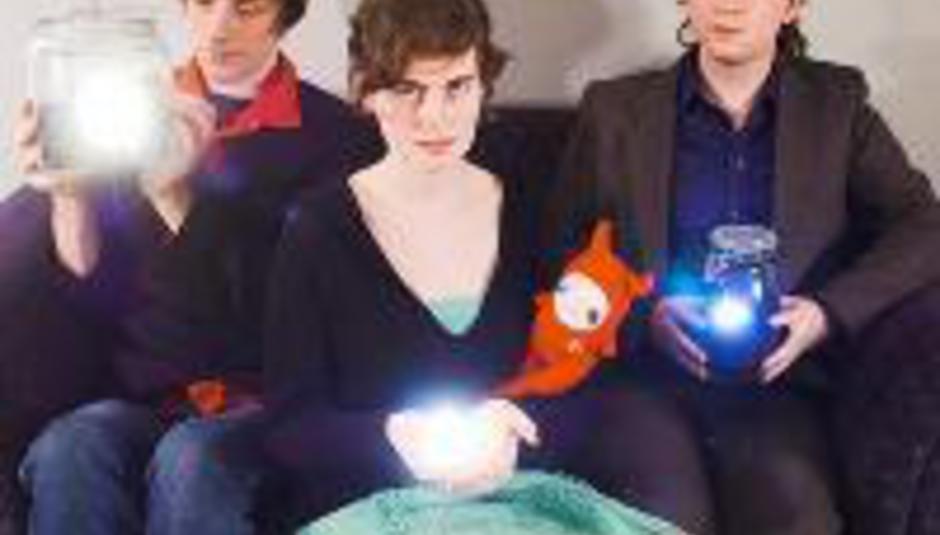 Victoria, British Columbia’s Immaculate Machine craft punchy and literate indie-pop that bursts with three-part harmonies and sarcastic, intelligent lyricism. The trio – Brooke Gallupe, Kathryn Calder and Luke Kozlowski – dropped out of university to focus on the band full-time last year, and have since unveiled Fables, their fourth album and second on venerable Canadian indie imprint Mint Records. In between five straight shows in London, Gallupe sat down and answered a bunch of our lubricated e-mails. Welcome! Nice to see you. How’s your father? Blah blah blah...

So, tell me the Immaculate Machine story. Where is the band from? What were you doing before the band was formed and how has the band grown to the level where you are today?

We have always played in bands, it was just sort of a given. This band was just something to do while we were in university, but after a few tours we really started to think of it as our future. When we signed to Mint Records, I dropped out of my MA and Kathryn and Luke both quit their BAs and now here we are. I remember the first time I put ‘musician’ instead of ‘student’ as my occupation on some official documents. It felt really good.

Tell me about working up towards signing with Mint Records: How did putting out two records on your own and touring Canada attract Mint, and why did you choose to sign with them?

We're a very impatient band; as soon as we decided to start the band we were planning a recording, then a tour, then another recording. There was never any waiting around strategically to shop for labels or anything. We have a real Do-It-Yourself mentality. When Mint Records saw us they were really impressed by our initiative and boundless capacity for touring and they signed us. I am glad we went with them; they are a really nice and understanding label.

I sense a lyrical sarcasm in each one of your songs, somewhat of a commentary on a scene you are definitely a part of. How do you separate your devotion to the community and the obvious chiding of it that comes from your words?

Maybe what is great about the indie scene is the possibility of reflexive analysis, self-criticism. I would like to think indie music is more thoughtful than your average ‘baby baby yeeeeah’ modern rock or pop.

So there is no bassist in the band. Why? Anything against bassists? Is it their smell?

No mate. Kathryn just plays the bass lines and lead lines on her keyboard – thank goodness for her classical training. We just work best as the three of us; there is no fourth member that would fit easily. Kathryn occasionally laments being tied to her keyboard and unable to move around much, but overall it works well.

I hear Kathryn performs in the New Pornographers as well. How did that happen?

Kathryn was scouted by AC Newman, who is her long lost uncle (convoluted story involving adoptions and birth parents and stuff), to fill in for Neko Case when she can't tour. Now Kathryn is a full-fledged member of the band, which is cool but also can be difficult when it comes to scheduling for Immaculate Machine.

Your new album is called Fables, and received a lot of positive press it has. Why is it called this, and what were your goals going into the recording process? Do you feel you accomplished said goals in retrospect?

Something about Fables just works for us as a title. The songs are little vignettes, glimpses of our touring lives, our relationships with each other, our romantic relationships, etc. Songs like ‘Jarhand’ and ‘C'mon Sea Legs’ are metaphorical tales about lessons we may or may not have learned on tours.

Speaking of lessons, how did you attract Alex Kapranos, The Cribs and Owen Pallett to lend their talents to the record? Those are big names to come and join you in the studio. How did you go about organising schedules and touring requirements to get everyone together to record?

Alex Kapranos and The Cribs were totally random additions to the album. They were touring around Vancouver and happened to stop into the studio where we were recording. We had to ask them to sing obviously, and they obliged. Very nice people. Owen Pallett was more deliberate: we met him on our very first tour and have always wanted to work on something with him. He and Mike (Olsen, the other string player) are so talented! We would love to tour with all the guests from the album but, alas, it will probably never happen. We are pretty good at recreating everything with just the three of us.

** Back to Fables: I sense a theme on revolving around lambasting those who do not cherish, or at least appreciate, what is around them. Is that a jab at the aura of pretension shrouding our so-called indie community? I could be way off here...**

It's not trying to be a jab at anything, but authenticity is sort of one of our main themes. I think their are enough bands already doing blasé irony so that it is pretty much covered.

You just played five shows in London and nowhere else: what prompted the decision to favour London over other towns in the UK, and how did the shindigs go?

We went to London before the album was release in the UK to meet up with some labels and agents and such. London is an amazing city, so much fun. We played shows with fellow Canadians Tokyo Police Club and the New Pornographers as well as a few on our own. The crowds seemed really into us, soI can't wait to go back.

Immaculate Machine will be back in the UK soon, as sources suggest that people fancied their persuasive, sarcastic pop. Keep an eye out or just visit their MySpace page every now and then for updates. Fables is out now and reviewed here.