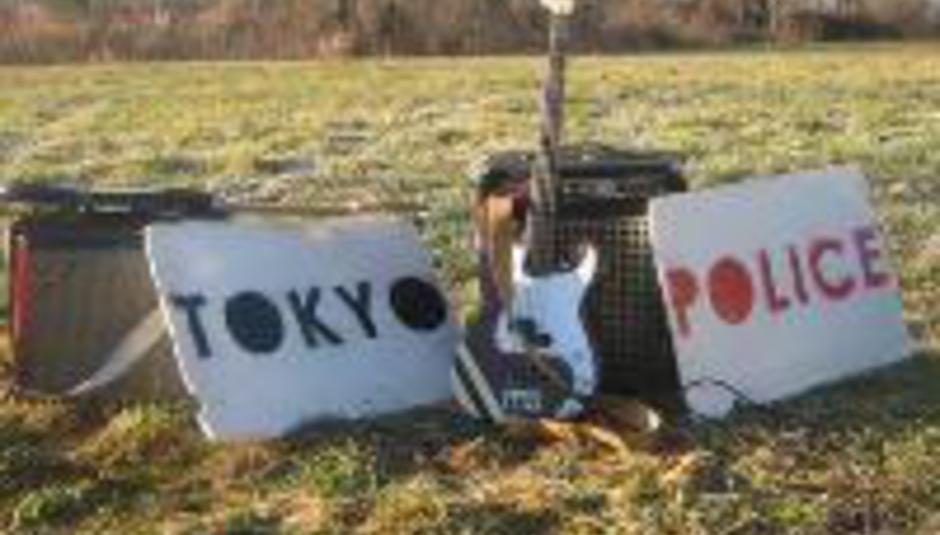 Tokyo Police Club: no sleep 'til they want to

Tokyo Police Club: no sleep 'til they want to

Canadians have blessed their British cousins with a number of beautiful indie-rock bands for some years now, but while the Arcade Fires and Broken Social Scenes of this wonderfully coloured spectrum of alt rock aim their sights firmly on all things epic, there’s also a breed of act from over there concentrating on music a little bit shorter and a hell of a lot sharper. Of these acts, Tokyo Police Club are certainly among the finest.

The four-piece – from Newmarket, Ontario – have been together since 2005. Graham Wright (keys, vocals), Dave Monks (vocals, bass), Josh Hook (guitar) and Greg Alsop (drums) formed following frustration with the disbanding of previous outfits. From basement shows just for fun, the four-piece swiftly rose to national attention, and released their debut EP A Lesson In Crime through Paper Bag Records in 2006. It received an official UK release earlier this year through Memphis Industries – also home to Field Music, the Pipettes and The Go! Team – and was slapped with a DiS Seal of Approval right here.

The band hit the UK early in July for a series of shows – scroll for dates. Ahead of said gigs, DiS got on the blower to Memphis HQ for a chinwag with keyboardist Graham Wright.

Your summer schedule is pretty hectic: in addition to the UK dates, you’re playing a slew of festivals, some of which I’ve never heard of… what’s the Hurricane Festival?
I’m honestly not really sure about most of them – there are just so many festivals that I can’t possibly have heard of them all, so… I’ve heard of the Accelerator Festival in Stockholm.

Interestingly for us, you’re playing the Hove Festival in Norway – we’re going out there. Did you know, too, that your ‘Cheer It On’ is used on the official television advertisement for it?
Is it? Sweet! Free advertising… that’s great for us.

But anyway, the schedule: it looks fairly punishing. There aren’t all that many days off for a while…
This is actually a pretty leisurely tour for us, we were just saying. It’s only two-and-a-half weeks until we go home, and we’re on a bus for the first time. We’ll have lots of opportunities to sleep this time… if we want to.

I see things wrap up for you here at T In The Park. That feels like a long way off, still…
Yeah. Our tours can be tiring, but on our last tour we once went nine nights without a break, which as far as I’m concerned is way too long. I think it’s especially important for Dave’s voice when we have a break – if you have a break between shows it’s ideal, but you can’t always do that. Just to sing like he does every night, it’s really hard on his voice. For me it’s easy – I can just go out and press buttons. I can put a lot of energy into it, which I like to do, but I know that if the worst comes to the worst I can just play sitting down.

You must’ve reached the point now, though, where you’re getting offered shows on what should be days off?
Yeah, that is happening. A lot of it comes down to money. I know that’s not a good thing to say – it doesn’t make you sound good as an artist – but we do need money! We’ve got to make a living, as touring can be expensive. So we might have this wonderful day off planned, but then we’ll get offered a show for some ridiculous amount of money, and we just can’t turn it down. Every time we tour America, there’ll be one show where we’ll either have to do some ridiculous overnight drive, or fly straight from one city to some random place in Canada and then back again. The shows can be inconvenient, but if they’re for money we can’t turn down…

I get you. At the minute, too, I guess you’re all about touring, and music – there are few other concerns to the band?
Exactly. We’re getting to the point now where we’ve said no to a couple of things, and I’ve been kind of shocked by that. You see this money slipping through your fingers… but you can’t do everything.

You’ve a series of UK shows booked for July – how are the crowds here, in your past experience?
This tour will be our second time here. Last time we arrived after hearing good things about the crowds over here, but when we arrived we’d just come out so we weren’t anticipating anyone to know who we were. But every show we had in the UK and Europe had lots of people at them, and they seemed to know the songs and really be into it. We’re looking forward to coming back.

A Lesson In Crime seems tailor made for a live show – it’s short, sharp and full of hooks. It surprised me how it was criticised in some circles for being a short record, actually…
That was always our goal when we were writing it, to trim the fat and to keep cutting it all down. When we first started the band we had a set of maybe ten or 11 songs, which we cut six songs from and never played again. We then built it up to ten or eleven again, but when we recorded we cut it down to seven, and used the rest as b-sides or whatever. We did that because it’s important to us to have a record that someone can listen to, all the way through, and not feel it’s too long. We don’t want them pressing the skip button. That’s really important to us, and I think we achieved that.

Damn right – nobody needs an album that’s over 45 minutes…
We were talking about that on the plane over here, actually. Ten or 11 tracks – unless you’re a really, really good band – is enough. You can’t hold an attention for more than that.

Well, those who over-egg their albums usually have egos to go with ‘em…
Too right, and hopefully we’re not like that. It’s something we’re looking to avoid in the future.

The London show at the Barfly is a Levi's Ones To Watch deal – any free jeans in that for you?
Is it? Well, I have no problem with that sort of stuff. I know a lot of musicians, and a lot of fans, have hang-ups with a band being affiliated with anything like that…

But jeans are pretty harmless, right, unless they’re being made by stumpy-armed kids in China…
Right, yeah. But I don’t get paid a great deal for doing this right now, so I am more than happy to be compensated in freebies, and people love to give out free stuff to bands. When I was younger, I would always look at what someone like Jonny Greenwood was wearing – not that I could ever afford Diesel jeans. But now I get Diesel jeans for free!

‘Nature Of The Experiment’
---

A Lesson In Crime came out earlier this year here, but it’s been out in Canada for a while – what’s the state of play regarding its follow-up, your debut album proper?
We’re going to finish touring – we play Reading and Leeds – and then we’re going into the studio. We’ve had the past couple of months to work on it, without touring, so we’ve written a bunch of news songs. We’ve this tour here, and a tour of the US in August before we come back here, to road test the new material, and to hone them to as close to perfection as we can achieve. Hopefully we can write a few more on the road, too. The idea is to hit the studio in September, and we’d love the album to come out in February. We recorded the EP in three days, and we’ve not booked time for this one yet, but the talk is of a couple of weeks. A couple of producers have even said they’d take longer than that. With the EP, because we were so financially restricted, the goal was just to get the record done, and we knew all the parts. But with the album the goal is to get it done and finished, and we have to reach the point where we’re all happy with it. That could take a week, or it could take a month… we’ll see.

Some of the songs are in place now, though?
Yes, we have seven songs written for it. The problem is, though, that they’re all two-minutes long, so we’re going to write an 11-track album that lasts 22 minutes!