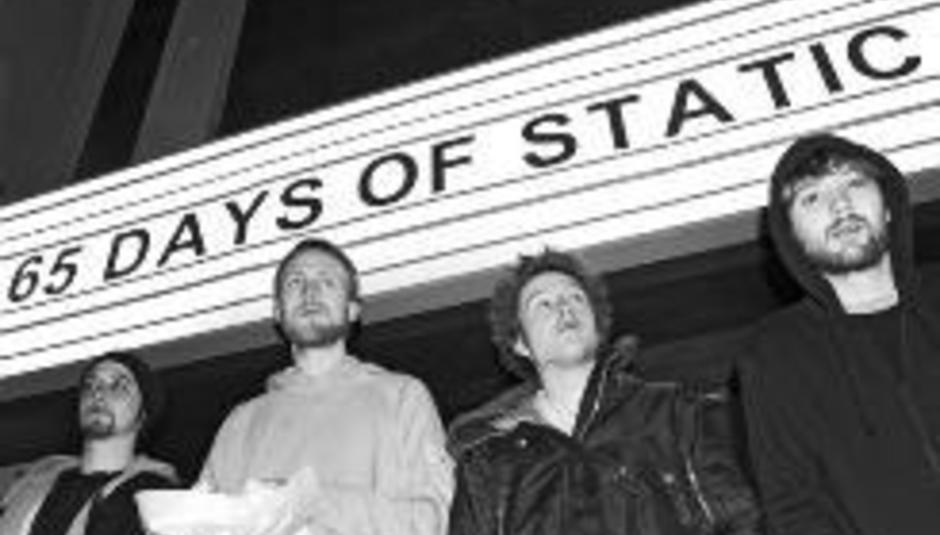 Versus The Fans, the preview: The Band's Perspective

Versus The Fans, the preview: The Band's Perspective

Sheffield's 65daysofstatic are Paul, Joe, Rob and Simon; or, to refer to their MySpace page, the beggar, the Viking, the boy and the fro. Sensible middle-of-the-road music they do not make, and this is reflected in their endearingly eccentric characters.

The band recently released their third LP, The Destruction Of Small Ideas, through the Monotreme label; this weekend, May 18-20, they perform at the Versus The Fans All Tomorrow’s Parties event, held at Butlins in Minehead, Somerset. They’re one of the bands picked to play the festival by the attendees themselves. Which is pretty special, really.

DiS caught up with Paul – driving to Cardiff for a show – ahead of ATP to talk about the festival, the concept of Versus The Fans and just how his band are going to headline a stage above the likes of Battles and Les Savy Fav…

You guys must be pretty chuffed to be playing ATP this weekend, especially as you’re one of the bands chosen by ‘The Fans’…
Oh man, we’re thrilled to bits. It’s the biggest honour that’s ever been bestowed on us, I think. And we were a voted-for band! We never really thought we would be considered for the festival, because it attracts a very discerning crowd, doesn’t it? In the best way, I think, so we’re all really flattered that we were one of the bands that was picked.

What do you make of the Versus The Fans concept, opening the festival up to the people that attend…?
I think the concept’s great – I’ve never been to any ATP before, but the line-ups have always looked brilliant, and having bands curate the festivals is a brilliant idea too. It’s a real nice take on things, and the whole thing seems a lot better put together than larger festivals.

Many a person has said to me that they think it’s the best ATP bill ever – what would make it extra perfect for you, personally?
If Saul Williams was added to this bill, it’d probably be the best ATP ever.

And Explosions In The Sky had to pull out…
Yeah, that’s too bad… we played with them for the first time a couple of years ago, and they seem like really nice guys. They’re friends with Josh (Pearson, currently touring with 65days), too, so we were looking forward to getting together, but…

How’s your time with Josh coming along?
I thought Josh was going to be so serious, but he’s not. In Newcastle last week we had a spectacular technical disaster, with three false starts to the gig. We had 15 minutes of silence, so he strode on stage and did stand-up comedy! He saved the day completely.

Back to ATP: just how are you going to top a stage that hosts the likes of Battles, Trans Am and Les Savy Fav before you take it? (Click here for the latest running order.)
(Laughs) Les Savy Fav are playing and I’ve never seen them, so I am SO excited! We’re kinda scared to be following such great bands, but by that point loads of people are going to be drunk…! We’re going to have to do our best to pace ourselves on Saturday. We’ll be driving straight from Reading the night before, and we get to stay over and leave at 8am on Sunday – we’ll most probably stay up the whole night, as we’ve ‘only’ a Koko show the next day! I’ve been told it’s a bit of a nightmare drive.

It can be… any other acts playing on Saturday catch the eye?
I’m looking forward to Shellac, too. I’ve never seen them – there are loads of bands playing the Saturday that I’ve never had the chance to see before. I’m looking forward to seeing Battles again, because I still can’t make my mind up about them, at all. The new album, and especially that single… I can’t decide whether I love it or what.

We, at DiS, can’t stop playing it… seriously. But, anyway: if you were to curate an ATP, who’d be the top three on your must-have list?
Oh, Tom Waits… err… Circle Takes The Square… and probably Saul Williams. That man is a genius.

65daysofstatic play ATP’s Centre Stage on Saturday night; The Destruction Of Small Ideas is out now on Monotreme