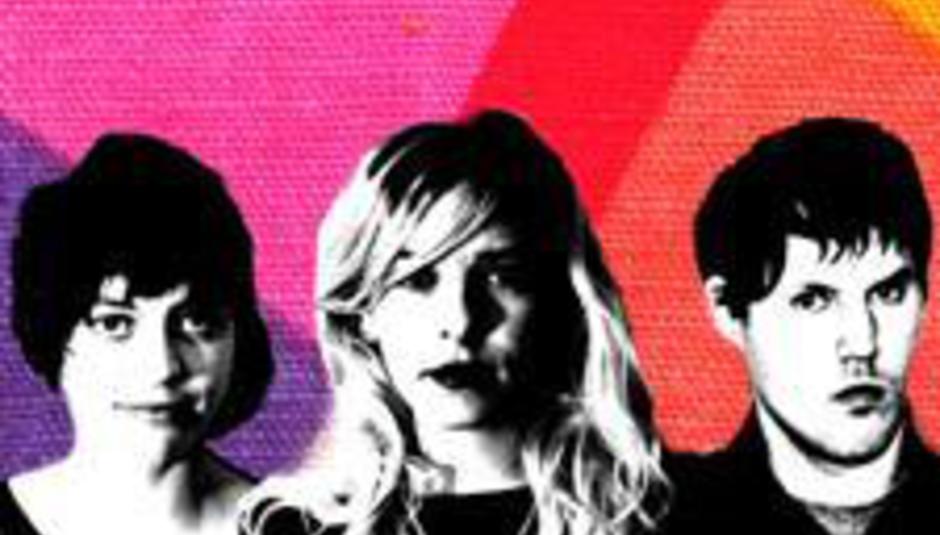 Having first got together in 2001, Melbourne trio Love Of Diagrams aren't quite the household names their longevity might paint them to be. Yet.

Although their releases don't even reach the half-dozen mark, every one has managed to make an imposing impact, whether it be the post-rock-meets-post-punk cold riffing that was debut album The Target Is You, or the recent self-titled four-track EP that has reminded British audiences just what it was about Love Of Diagrams that excited them in the first place.

Now signed to Matador Records, April sees the release of their Bob Weston-produced second long-player Mosaic, and the band - Antonia Sellbach (bass/vocals), Luke Horton (guitar/vocals), and Monika Fikerle (drums) - are currently at the beginning of a gruelling eight-week tour that will take them across three continents.

Sat backstage at Nottingham's Stealth prior to their Liars Club show, DiS caught up with the three-piece for a few words before the formalities of sound-checking proved too much for our ears...

Listening to both your albums back to back is almost like listening to two different bands: have your influences, direction and outlook changed over the four years between the records?
Luke: No, I don't think so. Rather than it being a case of we're listening to such and such rather than someone else, it's more of a progression within our band. When we put out The Target Is You, we'd only been playing together a little while and making instrumental music, and I guess as time went on we got more excited with the idea of putting vocals in. I can see where you're coming from in that we do sound different now as opposed to back then, but I think that may be as much to do with the recording process as anything else.

What made you decide to add vocals to your music? Was it down to a lack of confidence?
Antonia: Yeah, I would say it was pretty much that. We'd only just figured out how to play together as Love Of Diagrams and there's no way I'd have felt comfortable combining bass and vocals at that time. I was really shy then and didn't even face the audience at our early live shows.
Luke: I think, as well, we were quite happy just playing instrumental guitar music and didn't really feel vocals suited our earlier songs. I think some people, when they listen to that record, probably think there should be singing on there - I mean, it's not post-rock in the traditional sense of big sounds that veer between fast, slow, quiet and loud - but that was always the interesting part for us because we'd always fill out the song by adding melodic parts on the guitar or on the bass rather than a vocal. I think because we'd all got pretty intense, full parts to play using our instruments, it was hard to see where we could fit singing in at that point.

When did you realise that vocals were here to stay as far as Love Of Diagrams were concerned?
Antonia: I think once I'd overcome the initial fear on stage it all just came naturally, although I still think that my voice has retained an almost anxious sound even now.
Luke: I think it all came together when we were rehearsing the songs that made up the 'We Got Communication' EP, because we'd started to play a lot faster and both myself and Antonia had started singing. I guess it kind of clicked from then.

Do you find there are many differences between the way Australian audiences react to you back home, compared with the UK and America?
Luke: I think it's a much smaller scene for a start, and a lot of the time you get a buzz from city to city as word of mouth spreads about you. When we first started we got well known quite quickly within the alternative scene...
Antonia: ...what really helped us was the fact there were heaps of post-rock bands but nobody was doing anything energetic or different. At the time we didn't realise what we were doing was that different to be honest, but the initial response both from audiences and in reviews was great.
Luke: It's quite amusing now that some people class us as being part of the whole post-punk revival scene when we were actually doing our thing a long time before most of those bands even got together. I mean, we really dislike that whole scene.

Does it seem strange that to a lot of people in the UK you're still seen as being a new band?
Luke: No, I think that's great.
Antonia: It bothers me a little though because of what we were saying before, in that people think we're trying to be like all the other Gang Of Four sound-alikes. I think the scene here can be a bit fickle as people always seem to want the ‘new thing’ and we feel like saying, ‘hang on a minute, we've been playing this kind of thing in Australia for ages’, so it can be a little frustrating.
Luke: On the other hand though it is nice to play to new audiences that have never heard you, particularly when the response is positive.

You're currently signed to Matador. How did that come about?
Luke: We really liked the label and I e-mailed them to say we were coming over to the States to make a record with Bob Weston and I put a link to some of our mp3s and they responded a couple of days later saying they liked what they heard and asked us to contact them when we were next playing live. When we finished the album, Bob sent it off to them - I think he sent it to a few labels, actually - and Matador were really enthusiastic about releasing it so we signed to them without any hesitation, really.

Would you say that you're happier with the finished version of Mosaic compared to The Target Is You, particularly with someone like Bob Weston being at the helm?
Luke: Definitely. We were never happy with a lot of the sounds on The Target Is You, particularly the drums.
Antonia: I think we inadvertently achieved something that we'd strived for, but in a more lo-fi manner to what we were initially aiming for. We didn't have that much money to spend then so when we could finally afford to make the album we wanted - i.e. this one - we decided to make the bass more audible and the drums more audible and the vocals more crisp...
Luke: ...and I think it's really worked. The Target Is You has its charm but Mosaic is a more complete record and certainly a better representation of what Love Of Diagrams are about as a band.

The Love Of Diagrams EP has definitely created a buzz over here, particularly as all four songs on there could be singles in their own right. What made you put them all onto the one EP?
Luke: I think that was Matador again. They really liked 'No Way Out’ (off the We Got Communication EP) and advised us to put it out again to show to people hearing us for the first time that we had a history, and then they liked both 'Pace Or The Patience' and 'The Pyramid' that we'd recorded with Bob, while the Pylon cover 'Cool' is one that we always close our live sets with and it usually goes down really well, so it just seemed natural to put a live version of that it on the EP.

Will there be any more singles or EPs taken from Mosaic?
Luke: I don't honestly believe people write songs purely for the basis of releasing them as singles any more. I mean, sure there is always gonna be the need for radio play...
Antonia: ...I think Matador would like us to put another single out in the summer, but we'd like to think the EP wraps things up for that chapter.
Luke: When it comes down to it though it is all up to us, and although Matador will give us ideas and advice over what to do we have the final say.

Where do you see yourselves going with album number three?
Antonia: I think when you look at the progression we've made between the first two records, we'd definitely like to make something even more experimental.
Luke: We're road-testing two new songs at the minute. It's really hard to say how or even where they'll end up, but one thing that's for sure is that the next record will come out a lot faster than Mosaic did. We finished recording the record in March 2006 so to us it should have come out at least six months ago, but at that time we didn't have Matador to put it out for us, so now we do have their support we'd like to get another album out as soon as possible.
Antonia: And also now we're getting some recognition in the UK it would be nice to concentrate on playing some more dates here in the future as well.

DiS recommends that you start off with The Target Is You album on Unstable Ape Records and work your way through the band's five releases in chronological order to get an idea of the band's development. Yes, we do. Mosaic is released via Matador on April 9.

For more information on Love of Diagrams visit their MySpace page.