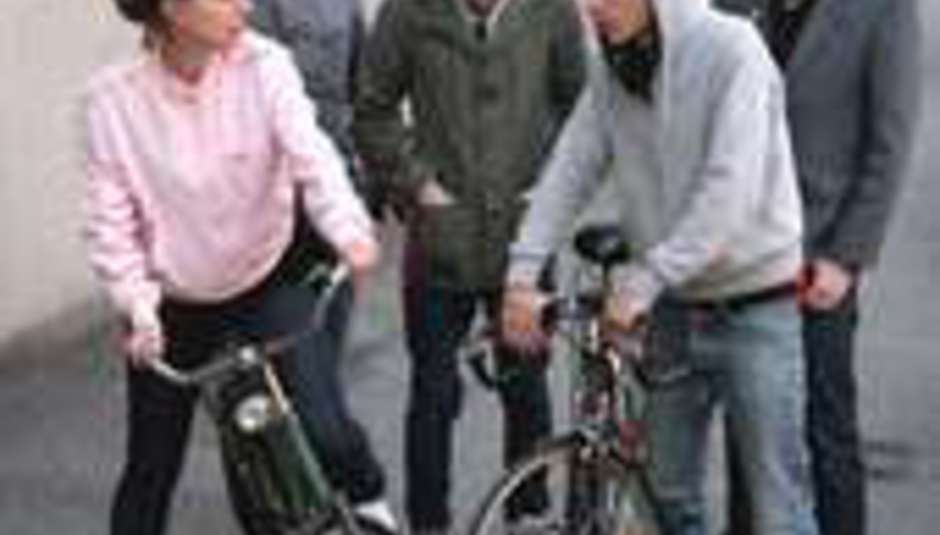 DiScover: Love Is All

DiScover: Love Is All

Whilst not strictly a ‘new’ band - the Gothenburg quintet have been around since 2004 and have half a dozen singles and a critically acclaimed long-player to their name - it does feel as if Love Is All have been overlooked in Britain for whatever reason.

Hopefully all that is about to change this month as the release of awesome double A-side 'Ageing Had Never Been His Friend'/'Nothing To Be Done', coupled with them being the main support on The Rakes' biggest UK tour to date, should see them finally cross over to a whole new, rabid audience.

Love Is All is Josephine Olausson (vocals/keys), Nicholaus Sparding (vocals/guitar), Johan Lindwall (bass), Fredrik Eriksson (saxophone), and Markus Gorsch (drums). DiS caught up with the band prior to their show on the third night of the tour at Nottingham's Rock City, and found them in a particularly buoyant mood considering their last trip to the city didn't exactly go according to plan...

Without meaning to dwell on what happened that evening, your last show in Nottingham at Junktion 7 in February coincided with a power cut, resulting in you playing after midnight when all was restored to about ten people...
Markus: I think there might be a curse over us, being in Nottingham...
Josephine: There is.
Markus: We don't want any power cuts today!
(thankfully there wasn't...)

You've received a fair amount of critical acclaim in the UK. What's the reception been like at your shows?
Markus: We have? That's strange because we don't get much of a reaction when we play over here.
Josephine: I hate to say it but UK audiences have been the worst.
Markus: I don't know why that is. Maybe it's because we've played more in places like the US and Australia and so more people know about us and our songs.
Josephine: It's like tonight. We're going to be opening the show while people are coming into the club, which is possibly the least ideal situation when you're trying to play to new people. I mean, it's good that we've been given the opportunity to do this tour and we've enjoyed it so far but at the same time it is difficult too.

I'm surprised at that, as I would have said your sound is well tailored to UK audiences as quite a few of your influences are British. It seems fairly evident…
Johan: I think because there are so many British bands currently touring and releasing records it makes it harder for people like us to break through.
Markus: Also, because we're based in Gothenburg, we can only come over here a couple of times a year and tour whereas bands who are based here can play the whole year round if they wish to do so.
Josephine: Actually, I think it's because we don't have matching haircuts and tiny leather jackets that don't fit properly...
Markus: I thought the scene over here was called New Rave or something now?
Josephine: Oh well, in that case then, maybe it's because we haven't got any bright neon clothes in our wardrobe either.

That's probably more of a good thing in that you can't be pigeonholed as part of a scene, so therefore you'll outlive those type of bands you're talking about.
Josephine: I hope so, because I think we're one of the most original bands around at the moment. Sweden is completely different to the UK, in that no two bands who I know do actually sound the same, or try to for that matter. I mean, look at Peter Bjorn & John for example. How would you try and define what they're doing? Most of their songs sound unlike the last one, let alone the band themselves. I don't think there is the same intensity or level of pressure from the media to fit in to a certain style as there is here. There is more of an emphasis back home to just progress naturally - I mean, the five of us don't even all like the same bands or genres of music anyway, so it would be impossible to try and clone us as part of any scene.

You've covered The Pastels' 'Nothing To Be Done' on your new single. Is this the one musical influence you all have in common?
Markus: No I don't think so. I wasn't that aware of The Pastels until a year or so ago. In fact I've probably only heard about three of their songs now.
Josephine: They've always been one of my favourite bands, and I think 'Nothing To Be Done' is their best song.
Nicholaus: I do think our version sounds nothing like the original, which is good as far as we're concerned. We have had people coming to us at the end of our shows asking if it's a new song.

Your album is called Nine Times That Same Song, yet sounds anything but formulaic. Why did you give it that title?
Josephine: Well, it was meant for people like you...!
Markus: ...in that whenever we read reviews one of the main criticisms most bands get is that all of their songs sound the same...
Josephine: ...so we thought we'd say it for you, even though we don't actually think they sound the same either! I think we were all pretty terrified of getting a bad review that went along those lines, so we just said it ourselves first and then if anyone said different it was an unexpected surprise!

One of the songs on your current single, 'Ageing Had Never Been His Friend', is taken from the album. Are you planning to release any more songs off Nine Times...?
Josephine: No I don't think so. We're hoping that will be it. I think we're going to be concentrating on the next album when we get back to Sweden.

Have you written many songs for the next record?
Josephine: We've got a few things here and there and I think we've got a couple of songs that we will put on the album, but at the same time we're at a stage where we don't really know what direction the record will take in the future, so when the time comes to actually make the album things could possibly change. They will definitely change, I suppose I should say... we're always looking at new ways of writing and recording, and I think one of the main features of Love Is All is that we're always creating and developing new sounds. Ultimately we really do try to sound unlike anything else that's out there, either past or present.

The recording process for Nine Times... seems really complicated, as there is a multitude of different sounds and ideas throughout the record…
Johan: I think we do try and keep our recordings as near to how we'd play them live as possible. It's really difficult to tell as an end result as I've never seen us play live, but we are one of those bands that try to spend as little time as possible recording in the studio.

So do you all have an equal contribution when it comes to writing the songs?
Johan: We do as far as the music is concerned, but the lyrics are all pretty much down to Josephine.
Markus: We all get to study them first though, tell her if we think they make any sense.

The single 'Ageing Had Never Been His Friend' / 'Nothing To Be Done' is out now on What's Your Rupture?/Parlophone; click here for a review. For more information on Love Is All visit their MySpace.