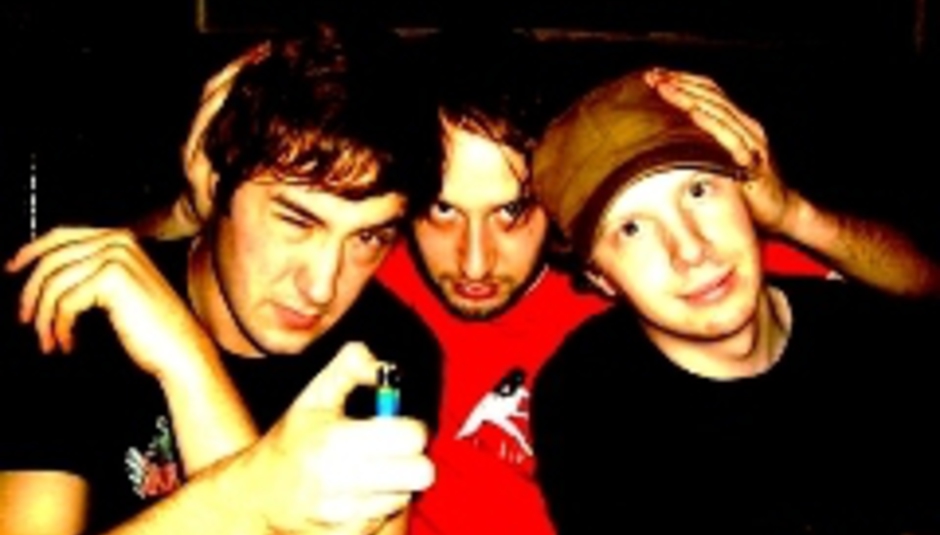 DiScover: October All Over

DiScover: October All Over

October All Over are, to quote their own MySpace page, “a loud band from London”. Need we say any more, really?

Yes, really: anyone can be loud given tinnitus-spreading bluster enough, but where October All Over trump so many of this nation’s capital’s most-rocking acts is that they meld their might with killer pop hooks and stirring melodies that bring to mind the Breeders as swiftly as their chopped-up chords conjure thoughts of a dozen or more hard-touring hardcore outfits.

The four-piece – Neil (guitar, vocals), Paul (drums), Graham (guitar, vocals) and Sophie (bass, vocals, not pictured!) – have been playing London’s dirtiest and dingiest clubs for some years; from time to time they’ve made it beyond the city limits, but to many an ear to the underground they’re part and parcel of their hometown’s D.I.Y. scene. Keen to play, keen to promote, keen to do things their own way, the quartet’s work rate has only slowed when key members have been abroad, as Sophie was for a period in 2006.

2007 will see the band release their second album and undergo a line-up change, as Sophie will leave the band for good – her final show with OAO will be at London’s Buffalo Bar on March 16 (Silver Rocket), but before that the four-piece play this Saturday’s DiScover Club, promoted by DrownedinSound.com and Rough Trade Shops, at London’s Notting Hill Arts Club.

The facts: doors open at the club at 4pm, and OAO will be joined by the also excellent twentysixfeet and An Emergency – DiScover interviews with both acts are already available for your reading pleasure here and here. Full details on the DiScover Club, March 3, can be found here.

Before you come on down to party some with us, DiScover October All Over…


Hello October All Over! Please give us a quick overview of the band’s composite parts: how and when and where did the four of you come together; what you were doing, musically, prior to OAO; what your favourite television quiz shows are and, um, what’s better: Guinness or Guinness Extra Cold?

Graham: Neil and I met Sophie when her old band were on the same bill as us in 2000. Both bands were on the verge of disintegration, as people were either moving away or doing other projects. Neil and I hit off with Sophie and it was pretty obvious we were gonna play together. I think it took a tearful J Mascis gig to seal the deal. Sophie had already sung in her previous band and her vocal style worked just perfectly with the unholy racket Neil and I favour. The band took shape pretty quickly and as soon as we found Paul Mist – who took some convincing – our sound just came together. I always felt OAO had a distinctive sound from day one. Angry pop? Historical alt-rock? I dunno, it just gelled. I’m liking Nevermind The Buzzcocks at the moment – Simon Amstell just doesn’t give a shit. He's smart. And Guinness regular!

Neil: Guinness regular, but only if there’s no guest ale.

Paul: Panpipes and The ‘Golden Joystick’ challenge section of Gamesmaster. Bring it back, Patrick. And Guinness… I heard they’re bringing out Guinness-flavoured Marmite. Good times.


You’ve been gigging around London, on and off, for some time but never with much regularity – I know your bassist left the country for a bit, so did this render the band on hiatus for a while? Have you had the opportunity to play around the country much?

Neil: Yeah, we’ve been unfortunate that there have been a few extended periods in the last couple of years where we’ve been unable to play for various reasons, and we’ve hardly played anywhere out of London, as none of us, or our friends, have access to transport. I mean we can cram the amps on a train to Oxford, but it’s just impractical to do it for more than one night. When we’ve found a label for the new record, we will put together a tour with some like-minded bands, hire a van and really get out there.

We had a wasted/frustrating year in 2006, really. It started so well with our single selling out and being tipped in certain areas of the music press, but the label we were on went down the pan and the money promised for our second album did too, so we went from being in a great position to having nothing again. And then with the imposed three-month lay off it was hard to see what would happen.

Paul: My favourite memories of playing outside London include sleeping in a tent and waking up in the middle of a boot fair in Suffolk.

You’ve one album to your name already (The Sixteen Channels), and a second coming – what’s the progression like from A to B? The new material I’ve heard live is certainly… chunkier?

Graham: The first album was inspired very much by simply playing in a new band! That and horror films and Black Flag. The single that followed (‘2005 BC’ / ‘The Cabinet Of Dr October’, self-released) was a slightly new direction, and the new album Vital Organs takes the seed of everything that came before with the additional influence of returning to the bands I listened to as a kid: Slayer, Maiden, Megadeth et cetera. That along with the rise of bands like Mastodon and Baroness, and long-time favourites Converge, Cave In and Refused.

Neil: It’s a progression that we wanted to make, and one that reflects the music we’ve been listening to for the last year or two. I’ve been listening to loads of Mastodon, Cave In, Hot Snakes, These Arms Are Snakes and Old Man Gloom. The new stuff may be heavier, but still with the original dynamic of weird timings and screaming with more traditional melodies and choruses. From a technical point of view we decided to switch Fender guitars for Gibson, so even the older songs are sounding much fuller than they ever did! I think whatever path we go down we never lose sight of our original desire to create intense interesting music with a more ‘pop’ edge, and having three voices really allows you exploit that.

What bands have you been compared to previously? Are these comparisons flattering? Have you been able to play with many bands you admire?

Graham: We used to get the At The Drive-In/Sonic Youth thing, but we haven’t had that so much lately. I love the fact Vital Organs genuinely sounds like Helmet one minute and Stevie Nicks the next. Whatever the fuck that sounds like! Either way, this record has a hell of a lot more influences on it. It’s still got a nice, scrappy Unwound feel to it, but vocal harmonies too!

Neil: Comparisons have really ranged quite a lot. I liked it when people said we were like Pretty Girls Make Graves meets Helmet, but I never understood when others said we sounded like Idlewild! Although we would say that the new album is somewhere between Converge and Fleetwood Mac. As for playing with bands we admire, it’s smaller bands and friends like Cove, Silent Front, Rainer Maria and Collapse (RIP) that we enjoy playing with. The first time we played with Collapse they fought drunkenly on our behalf, after some bunch of dicks missed the point of what we were doing. We had to admire that.

Paul: Sex in a wind machine.

It seems, to me, that each member’s tastes can be quite different to those of the next, and the next… or, rather, that Neil and Graham like The Metal while I see Sophie as the more melody-loving of the quartet. Is this the case, and if so is it an essential factor in finding that balance in your songwriting, between CRUNCH and cooooo…?

Neil: You’d think so, but Sophie is just as likely to be down the front at a Mastodon show as much as Graham is likely to be at a Sufjan Stevens show. Although there are some grievances – I don’t think Sophie listens to much Nile – we do share a huge common ground from High On Fire to Paul Simon.

Paul: Paul is also a member of the band. (Sorry Paul – MD)

Graham: OAO is a fun band to be in, as each member brings their own influence in and it comes across without taking any other elements away. Neil and I have always been beer-swilling metal heads! I don’t feel that having four of them in the band would work. Paul lives and breaths AC/DC and Iron Maiden and has a great less is more ethic, and Sophie loves a bit of everything.

Neil: As for song writing, we don’t write in a classic verse/chorus/verse style and a lot of our songs don’t even have vocals ‘til we go into the studio. We just see what the song needs and try a few things out, to see how they shape the path of the song. We know our song writing process well enough that when Sophie leaves we will be able to continue down the same route.

What’s going to happen when Sophie leaves again, as I hear she is? Are you auditioning for bass players? Or have you been writing as a trio at all? I guess you must have while she was away in… well, wherever it was she went off to. Somewhere warm…

Neil: Sadly Sophie will be replaced, like Paul Dianno, but with the female Bruce Dickinson. We all felt that we had failed to live up to our potential as this version of OAO for whatever reason. So we’re going to move forward, and hopefully this record is going to give us the best chance of doing that. We’ve rehearsed as a three-piece before, but we thrive on the dual guitar action, so it wasn’t as satisfying.

Graham: We will be auditioning as soon as possible. I’ve already got a four-track tape full of new songs! And, yes, it’s just getting more intense!

What does the rest of 2007 – of which there’s a lot – hold in store for October All Over? When’s the new album out and who has the pleasure of putting it out? Basically, plug your upcoming STUFF here…!

Graham: 2007 is gonna be the year we work ourselves to death! Haha. We're basically gonna work as hard as we can to get this record, Vital Organs, known. It’s high time we did so! Not sure who's gonna be putting it out just now, but we have ideas. For now it will be available through us at shows.

Neil: We’re mastering Vital Organs this week, then there will be promos from us until we find the label who’s going to put it out. We’re lucky to have a few people whose labels will take seriously when we tell them to listen to it, so fingers crossed on that front. We have two more shows with Sophie, this one and the March 16 Silver Rocket show, which hopefully will just be a huge party! Then it’s new member / album release / tour as quickly as possible. In that order. That’s the plan.

October All Over play the DiScover Club, at Notting Hill Arts Club, this Saturday, March 3. Also on the bill are twentysixfeet and An Emergency. For full gig details, please click HERE.

For more on October All Over, click to either their MySpace or ‘proper’ website. Songs – different songs! – can be heard at both sites.