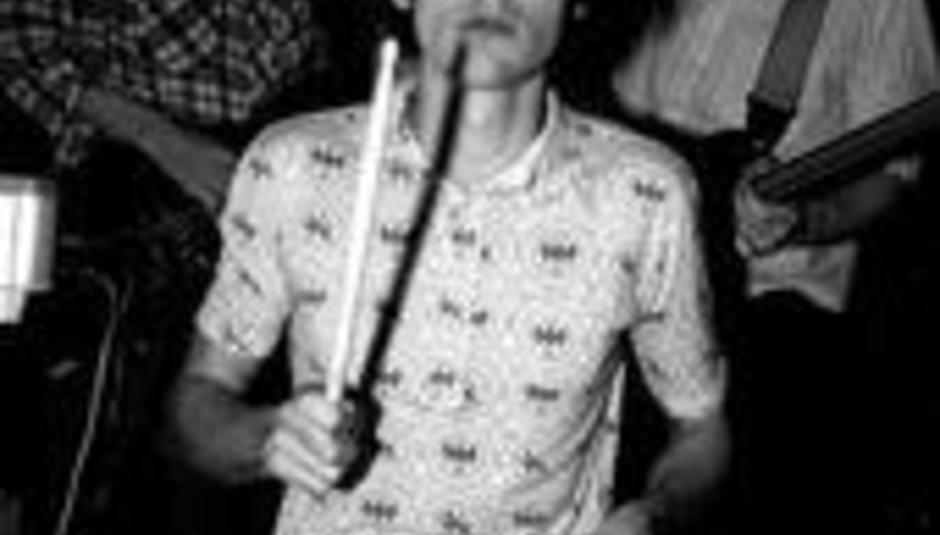 I have never been closer to Wales than Chester, and I have never explored the regions of this isle north of that. Armed, though, with the limited knowledge of this territory gathered through motorway windows and service station canteens, it's easy to start to imagine that every view from British M-roads is the same: hungover skies begetting sodden fields, whose dirt tracks get stickier between every streetlight that goes ticking by.

The debut album from London quintet The Mules was reviewed on this site back in September (review). Its cover star, a forlorn caravan dumped in one of those muddy motorway-flanking pastures, summed it up perfectly - Save Your Face prattles and skunks along like a psilocybin-warped road-trip through the UK's rural backwaters.

With the album getting a full national release with the help of Kartel on Monday, and 'We're Good People' - boasting a remix from CSS - released as a single soon after, the time is ripe to talk to the band's singing drummer Edward Seed.

First question - wouldn't it be easier to rope in a dedicated drummer?
Perhaps, but it might not be so much fun. It only worked out this way because we didn’t know any drummers when we started, so I did it. It’s become part of what the band’s about now, anyway. Jim the bass player and I are both guitar players in truth, but because we’re not playing our natural instruments we don’t approach them with lots of baggage – he doesn’t start a part by plodding out dur-dur-dur-dur basslines and I don’t start by crashing away on some fancy cymbal every few seconds.

The band does have a fairly unusual sound - there's a lot going on. What music have the five of you been listening to?
We each come from quite different musical backgrounds, so listen to lots of different things – country music, noise rock, gospel, opera, pre-war dance music, jazz, hip hop, all sorts. Lots of our tastes cross over, and there’s probably some sort of thread that joins all the music we like. Not sure what it is, though.

Outside of music, what else informs your sound?
I’m not sure. There’s no big concept behind the band, or anything like that. Someone asked us a while ago if we liked rockabilly because of its outlaw image, or something like that, and it had genuinely never crossed my mind. We just like clicky drums and twangy guitars. The words are different, they’re more attempts at telling stories – most on Save Your Face start from people I knew or stories I heard at home in Wales, but others start from newspapers or books, others are just completely made-up characters, and there’s a bits of me in many of them. From a writing point of view, that’s mostly informed by where I grew up, in mid Wales.

What was it like growing up in mid Wales?
I love it there. It’s not somewhere that people tend to know very much about, because it’s not a coal or slate-mining place, which is basically all most people think Wales is. I grew up very close to the English border, and it’s often hard to tell around there which country you’re in – the landscape is very soft, accents are very soft, each merges into the other. It was mostly a brilliant place to grow up – it was only when I moved away that it became clear just how different my childhood was to most of the other people I met. If you live miles away from your school, the town and the people you know, you spend a lot more time on your own and get used to that, and not getting bored by it. It was quite a shock living in a city; I’m only just coming to enjoy London now. People here seem used to having countless expensive distractions around them all the time, and often aren’t very comfortable when left to their own devices.

How much of your sound is down to previously being based in Oxford? It's quite 'provincial'...
We’re not based in Oxford any more, we’ve all lived in London for the past couple of years, and other than Jim (bass player, who’s from Jersey) and me, the band members are originally from London anyway. All the songs on our record were written in Wales, though, so yes they probably are quite provincial, if only because that’s where I’m from. It wasn’t until we moved to London that I had any idea of what music-making was like here day to day, and people do seem to go about it in a different way than I did. If your nearest venue is thirty or forty miles away and you don’t drive, you don’t go to many gigs or anything like that, so the songs were written in comparative isolation.

Why did you decide to trim the line-up to five? How easy was it?
We didn’t really decide to do it, it was rather forced because lots of people who were in the band left to do other things. The real change was Jim moving from playing mandolin and banjo to bass – it was supposed to be a temporary measure until we got another double bass player, but it just worked, so we didn’t worry about it from then on.

Relatively speaking, you've been around for a while now. Was it important to you to hone your sound before you started pushing things more in the media? I can think of some other bands that maybe settled too early on a certain sound...
Short answer: yes. When we started gigging in Oxford, we didn’t try to get gigs until we were competent enough to get asked, and maybe it’s the same thing. It’s also because we were doing it on our own, having set up a label (Organ Grinder Records), and we were learning everything as we went along. There weren’t people there to say, 'now you need someone to do this, now you should play this gig, don’t go making a record yet'. We just wanted to make a record and release it. I don’t think that’s worked to our disadvantage at all, though, because we’re much more certain of what we’re doing now.

How important is it for The Mules to retain control over what they do? Presumably the label helps with that...
Control is vital, that was the point of setting up the label. Neither we nor Fireworks Night (The Mules’ bass player Jim’s band) wanted to wait for someone to pick us up and tell us when we could make a record, then make us tour it for ages and forget about the next one. Nor do we like to work with anyone we don’t trust or who doesn’t understand what the bands and the label are trying to do. It means that things take longer, I suppose, but when they happen, they happen the way you want them to. We are basically control freaks!

How did the remix with CSS come about?
Our manager contacted them, and the first we knew of it was when he told us they liked the song. It’s very kind of them, and we’re very pleased with what they’ve done. There’s another remix coming out on a 12” with the CSS version, and that’s a more electronic remix by our friends Lights. It’s interesting what completely different aspects of the song the two bring out – one concentrates on the lighter, dancier side, the other all the uneasy, skittish bits. They complement each other well.

If Mules should be played in just one room in the house, what room should that be?
Bathroom or attic.

Ed urges you to DiScover the following records:

As I said before, The Mules Save Your Face debut long-player will get a nationwide release on Monday (12 March) and will be followed by a single they like to call 'We're Good People'. The band will also embark on a live tour before the month is out, playing the following dates: