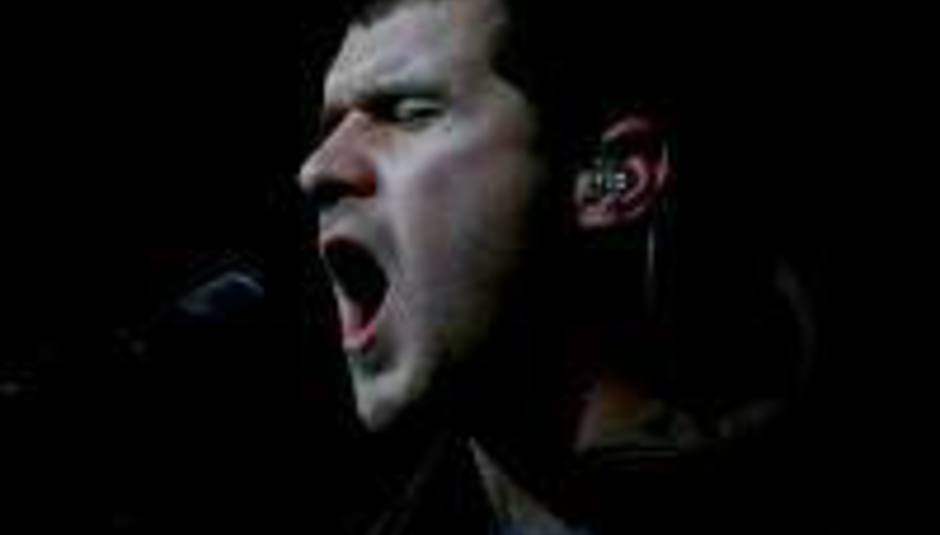 DiS meets Brand New's Jesse Lacey: "The headline would end up being something stupid"

DiS meets Brand New's Jesse Lacey: "The headline would end up being something stupid"

DiS is in Hammersmith. It’s dark, it’s drizzling and we’ve been given the wrong contact details. As it stands, we can’t actually get in to the venue to talk to this band to perform this interview. Instead, we’re talking to an American man in Dublin who’s looking after …Trail Of Dead. This is clearly not helpful in any way.

Just assume that after much blustering and long-winded radio communiqué we got in because what follows is the truth according to Jesse Lacey, lead singer of Long Island punk rockers Brand New. He doesn’t like doing interviews.

“In the States you get misrepresented. You’d be surprised how different the interviews are over here and even the result of them. I don’t like it as whole anywhere but it’s over here it’s much more bearable.”

After the release of their breakthrough second album, Deja Entendu, the flurry of press got people speculating about all sorts. There was chatter about his relationship with old friends from Taking Back Sunday and other bands; there was conjecture as to whether the band was named so because they believed that there was nothing new any more, heightened by the fact the album is roughly translated as ‘heard it all before’. The reality is much different.

“A friend of ours said he would call his band Brand New but he never got a new band so we took it. I wish it were something as clever as a sarcastic take on the state of music. I wish we were smart enough!”

Lacey goes on to talk about the reasons why he has had difficulty in wanting to talk to press of late:

---
“You either make trouble for yourself or you do something great. You want to make your mark one way or the other.”
---

The reality is that Jesse admires that band greatly, by the way. He admires how they’ve harnessed their popularity and have strived to make the music and live show the way they want it. I liken the Long Island, New York scene from which he and many other punk and hardcore bands have come to that of Iceland, where the island mentality is definitely the strongest or rather the best bands will be the ones to leave there.

“It’s a poignant description. There’s a thing about middle class white suburbia that is an island itself. You either make trouble for yourself or you do something great. You want to make your mark one way or the other.” He also admires how MCR have made their mark and have grown – almost mutating from album to album, seemingly fitting in with every trend, but actually forming the trends in the first place. He also understands how those same musical parallels can be drawn to his band.

“We understand when people talk about that growth but to us it’s really something in our subconscious and we don’t plan or think about it. It’s only in our records that it can be noticed.

“It’s strange to look at it this way, but our band is a musical documentation of us growing up.”

When I talk to him about the changes that he might have gone through his career he explains how, just like anybody, he had his tougher times and then the better times, but how it was always the tougher times that he would always come back to when writing. It’s not that they’re miserable bastards. It’s just that happiness never leaves a scar.

“It’s funny playing old songs and thinking about how different I was back then. It’s interesting when something you wrote five or six years ago relates to something that’s happening right now and you realise you’re making the exact same mistakes and you haven’t learned a thing.”

---
“We’re all pretty strong and stubborn, so with the five of us in a room there’s going to be some conflict.”
---

Talking of mistakes, Lacey is known for his perfectionism and once Deja Entendu had already been embraced by the masses he felt ease in saying he wasn’t happy with it.

“It wasn’t as finished as I wanted it to be. Even when it was 80 or 90 per cent finished I remember having to fly back after a show in London and finish it off. It came at a time with limited funds and it was difficult in the studio. We’re all pretty strong and stubborn, so with the five of us in a room there’s going to be some conflict.”

Despite the lack of enthusiasm about both the recording process and the result thereof, once I remind him of the overwhelming success of the record and talk to him about the tremendously positive effect it had on so many people, Jesse relented slightly. Or at least he accepted that sometimes not everything has to go to plan for it to work out for the best.

“It’s something we have to remind ourselves that as much as this is for us, after we’re done in the studio we give it to our fans and they make it their own and sometimes just because I’m not happy it doesn’t mean that it’s not good. We have a faithful and really forgiving audience in that respect because I feel that we can go into the studio and do pretty much whatever we want to and I’m pretty sure they’d give it a chance.

“Some of the kids just don’t get the new stuff and that’s ok because they enjoyed what they enjoyed. We’re happy with it. I can understand why other people don’t love the things I listen to and I like that. I make music for myself and if everyone else likes it then that’s just a bonus.”

Regardless of any problems encountered during Deja Entendu, the fact of the matter is their second album was a massive hit. Released at a time when p2p file sharing was at its peak, Lacey can easily attribute part of Brand New’s success to such activities.

“You look back at things like Napster and Limewire and that was when our band was taking off. I remember playing shows where all the kids were singing the words to our songs way before they could have bought a record so I’m never going to get down on something that helped us so much.”

---
“There are still people who go out there and buy records, special editions with triple CDs and double booklets… but that’s just going to end.”
--- He goes on to talk about how, although he grew up in the technological age, he sees a growing rift between himself and the younger generation. He finds himself relatively resistant to new techniques and activities but he is still has ideas and philosophies about the Internet and what lies in store in future.

“Music is really mind-boggling because hard copy won’t really be found in a mechanical fashion any more. There are already people that only buy things online. There are also still people who go out there and buy records, special editions with triple CDs and double booklets and that’s just going to end.

“The future of the visual is all on here (points to laptop screen). Everywhere you look, there’s a screen. I can’t even remember the last time I printed something out!”

For a man so adamant and forward-looking that fancy packaging and limited editions are on their way out, the design of his latest album is perplexing. Aside from the wonderful music held within the five-inch plastic disc, The Devil And God Are Raging Inside Me is a master class in aesthetic perfection. The CD and booklet are held within a heavy card slipcase that opens to display grainy old photos and typewritten words. It just reeks of nostalgia – in a good way.

“We knew we were going to put a record out so we thought about when we were kids what attracted us to a record beyond the music and it was things like the matt paper and other certain visual aspects. There was nothing hi-tech about things back then and we wanted something that was nice to have in your hands.”

Laying the photos out by hand and typing everything out on a chunky, clattering typewriter is a more organic design process than most bands adhere to and scanning it into a computer made Lacey “feel a bit dirty” but the result is truly splendid. The evidence of the quality of Brand New’s work is in the crowd tonight. 4,500 have turned out to see them tonight.

Jesse says he feels at home here because the shows here are the same size as the ones back at home but unlike Bullet For My Valentine’s show here a month prior, there will be no massive ramps or overblown pyrotechnics. Nor will there be any embarrassing power shortages either hopefully.

“We have some weird video cubes… and we’ve got lights that move around. That’s it. I saw Poison in New York and they had three tiers of ramps that went up 20 feet and they just did laps. I can barely play guitar and walk so that was eye-opening for me.”

Indeed, he stayed true to form that evening. He didn’t have to run around at all. He barely even had to sing. The audience were deafening, singing back every song as they played some select cuts from debut album Your Favourite Weapon and recent album The Devil and God Are Raging Inside Me and, notably, Deja Entendu almost in its entirety, front to back.

It’s notable because that is the record Jesse Lacey is the least happy with and that is not the current record they are promoting but he knows it’s the album the fans have taken deepest into their hearts. The whole set was played in chronological order as well so if you wanted to hear newer songs, you had to wait right until the end. The Devil has received some rave reviews across the board but it is the darker, angst-laden songs from Deja that will always prevail with their fanbase and the band are here to play for their fans, not indulge themselves – hence the setlist.

Despite this, Lacey is intent on recording their next album in the exact same way that he recorded their most recent. He doesn’t know how it will sound or what will influence it yet but he knows how it all works the best even if the outcome is not satisfactory to the masses. But now that he’s finally happy with the way they recorded it and the end product as well, who can blame him?

Brand New tour the US later this month – check their MySpace page, here, for full details.