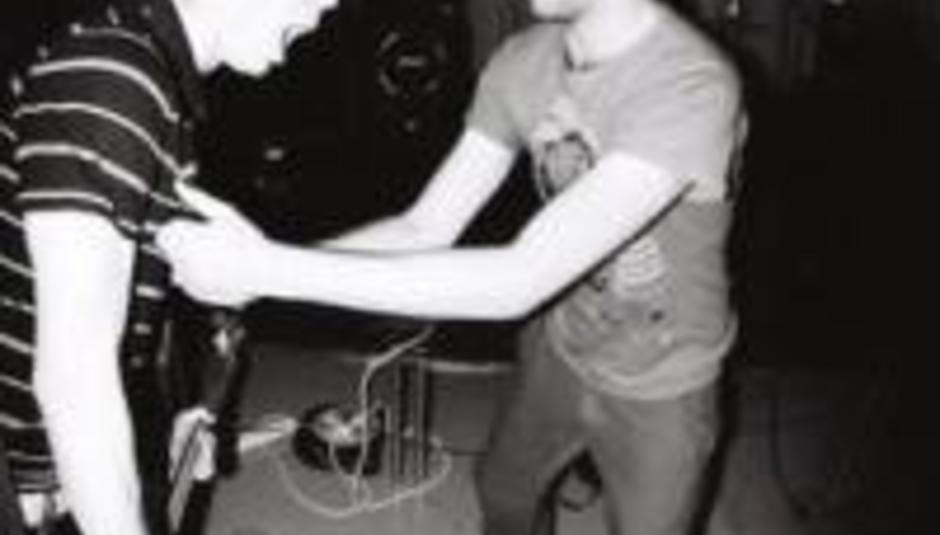 It’s confusing, I know: pages and pages of gig listings but only so much money to burn. Then, of course, there’s the issue of time: you’ve only so much, and there are a dozen shows an evening, at least, to pick from in our nation’s capital. So what do you usually do? If you’re like me you give up – you head home after work, flick on the television and sit there, eating your dinner with Kirstie and Phil in front of you whimpering on and on about how selling up in London buys you a manor in Leicestershire. Great, guys. Thanks. I rent. I’ll always have to. I’m not a paid-up telly person.

But Saturday something snapped – ping – and opportunity knocked: time allowed these already weary legs and fading eyes to attend three different shows, from the afternoon through the evening and into the early hours of the alleged day of rest. The last, three of three, was a club, and one I was DJing at… but still. Three shows, twelve hours, some booze: someone was going to miss Match Of The Day for once.

First of all I ride the city’s underground from my home in the leafy north to Notting Hill – here, Rough Trade Shops co-promote free shows every Saturday afternoon, from four ‘til eight, at the Arts Club on Notting Hill Gate. Perhaps you’ve even been to one or some – DiS regularly promotes shows there. This afternoon the neat ‘n’ tidy venue – cheap drinks at the bar and a DJ playing The Quo, nice – is taken over by Liverpool-based label Signature Tune. Headlining a bill of four is Canterbury quintet Lakes, whose self-titled five-track EP is released by said label today; their brand of hardcore falls somewhere between the twin pillars of excellence that are Das Oath and Planes Mistaken For Stars circa Fuck With Fire, although feel free to interchange those reference bands with ones plying a similar trade in shout-scream-vomit vocals and riffs that wouldn’t know subtlety if it stabbed them in the back. The supports aren’t so brilliant, but since the gig is a free one their relative ‘meh’-ness is forgivable. One makes the mistake of riling the venue’s sound man, though. Bad move. They won’t play here again.

It’s approaching eight by the time I’m forced back onto the network of tunnels and tracks that comprise the Tube – a few stops on its yellow line of a circular nature and I’m in South Kensington, trying to find my way into the union of Imperial College. A desk-bound gentleman directs my friend and I the wrong way, towards a ball-type event held in a large marquee. Everyone’s suited up, ties and tails and the like; I’m in scruffy jeans and a hoodie. Was that guy blind?

Eventually we find the room we need – it’s wider than it is deep, with a bar at one end selling lager at student prices. Needless to say I imbibe a little too much considering I’m only at gig two of three. Tonight’s festivities are presided over by A Badge Of Friendship, independently minded promoters who tonight have assembled a stellar bill: Exeter post-punks with keyboard wiggles An Emergency followed by Americans overseas Riddle Of Steel followed by London post-grungers Silent Front followed by Surrey-spawned tech-punk mavericks Meet Me In St Louis. The venue’s shape doesn’t make for great sound, and the faltering PA only worsens things; An Emergency try their very best to overcome the problems by wandering around the ample stage, standing atop amplifiers and generally mucking about a bit; their itchy and scratchy pop-hooked punk is brilliant in its composition, but its execution tonight is affected terribly by factors beyond their control.

Riddle Of Steel fare slightly better, sound-wise – the St Louis trio play a few new numbers, a couple from album two Got This Feelin’, and my favourite song of theirs, ‘Kissing In Secret’. It’s from their debut album, Python; you should own it, really. A sadly small audience is appreciative but barely moved, physically, by the Americans – they’ve great songs in their repertoire, songs that twitch and jerk like only the finest modern-day punk can, but the still-muffled sound doesn’t convey the amazing crispness of their outstanding records. It’s like listening to a through headphones made from your duvet. Silent Front claim the largest crowd of the evening – they crunch and grind and screech quite well, but in terms of arrangement innovation they’re the least-inspired of the bill’s four. Still, in terms of volume and bombast they trump every other act here.

Meet Me In St Louis (a pair, pictured) are working their way towards cult status – they’ve fans that sing along with their unusual approach to punk-rock, and pull shapes in time to polyrhythms that the likes of Battles would be hard-pressed to pull off. One day, hopefully, they’ll translate their regularly scintillating live show – think At The Drive-In at the time of that Reading performance being tickled by invisible Tim Kinsella clones – to disc without losing its incendiary qualities. Tonight, again, they mesmerise – vocalist Toby isn’t as twitchy as he has been at previous shows, but he remains the focal point for onlooker gazes nonetheless. But I have to leave slightly early, midway through the excellently titled ‘We Need To Act Like We Don’t Need This Shit, Then They Give Us The Shit For Free’, to make it to stage three of three at a decent hour; a run-in with an inebriated rugby player in the gents doesn’t slow me down, although it does make me hate the game a little more – really, I just don’t understand how you can’t poke fun at a sport where grown men spend many a minute with their heads beside other players’ arses.

King’s Cross’ Scala is swarming. Tonight, one of its weekly Chalk clubnight’s three rooms is hosted by DrownedinSound.com; I arrive to find DiS writer and DJ extraordinaire Gareth Dobson struggling to deal with the fact he’s been left as good as on his lonesome by stay-away DJs. He’s coping, but I go on early to relieve him for a while. I play ‘Get It On’ by Grinderman first and some fresh-faced and pilled-up kids leg it away from the dancefloor. Ha. Hits: Death From Above 1979 (yawn) and ‘Idioteque’ (yay); misses: every fucker that comes over and asks for Klaxons. Really, stop it: if you see me at the decks, don’t ask me for Klaxons. I won’t play them. Or The View. Or the fucking Roses (what year is this? I thought this was meant to be a ‘cool’ club?). A couple of hours later, and a good sixty minutes before we’ve meant to finish, we’re replaced by a guy called Dave with a laptop. He’s nothing to do with DiS, at all. He takes what feels like forever to set up his computer while I’m left looping ‘Me Myself And I’ ‘til it runs for nine minutes. He’s thankful though, and I wish him well – to be honest, after the day I’ve had and drink I’ve consumed, I’m glad to be shooting a little earlier than expected.

Come six in the AM, I’m home and fighting the buzzing in my ear canals to get to something like a state of slumber. Stupidly I wake up too early. I spend all of Sunday in a daze. I don’t go to any shows – I sit in front of my television and wait for the Carling Cup Final highlights. And fall asleep as soon as they come on.

Signature Tune can be checked out on MySpace, as can Lakes.
A Badge Of Friendship’s website is here; click your way there to check out upcoming shows around London. Both Meet Me In St Louis and An Emergency play free-entry DiScover Club shows for DrownedinSound.com at the Notting Hill Arts Club soon – click here for full listings information. Photo taken from MMISL's MySpace, here.
Chalk takes place every Saturday night at the Scala, King’s Cross – click here to visit the Scala site.