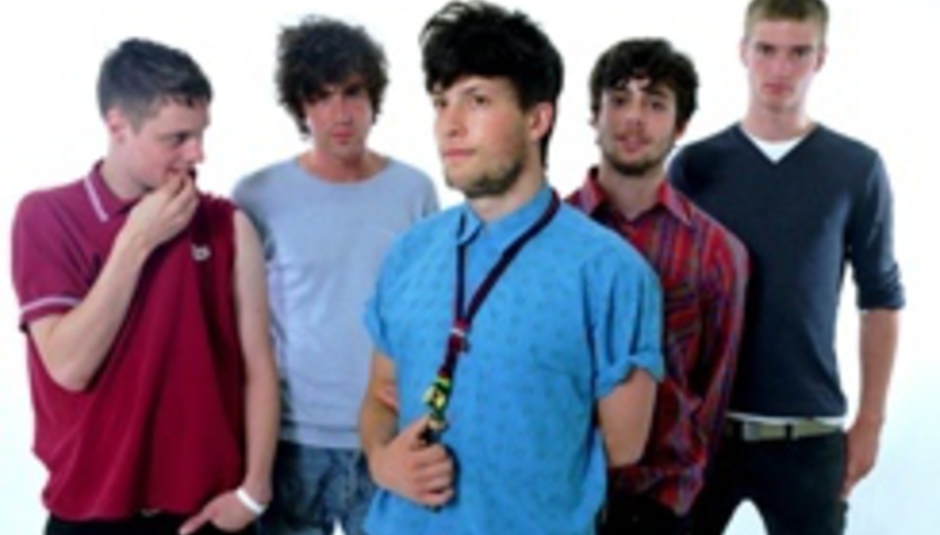 These past 18 months have been something of a supernova-directed launch-pad for Brighton five-piece The Maccabees. They’ve been catapulted from being virtual unknowns, playing their local pub and college circuit, to genuine chart contenders on the back of high-profile support slots with the likes of Jamie T (yay!), The Fratellis (nay!), and a nationwide headline tour throughout February that has seen the ‘Venue Full’ signs out en masse.

DiS follows the band to Nottingham to catch a few words with guitarist Hugo White and drummer Rob Thomas, while the rest of the band - vocalist Orlando Weeks, bassist Rupert Jarvis and guitarist Felix White - tuck into various light refreshments. Unlucky for some...

If 2006 was a good year for The Maccabees, 2007 promises to be even better. Are you surprised by how fast things are moving for the band?
Hugo: Yeah, it's madness. Obviously we always wanted the band to do well and for people to like what we're all about, but we didn't expect to be so high profile at this moment in time.
Rob: Things like the Gonzo tour with Zane Lowe and the NME tour with The Fratellis and The Horrors seem to have done us the world of good. It's strange because we always pull a decent-sized crowd in Brighton and London, but we never used to get that many anywhere else until after those two tours.

Indeed. I remember one of your first Nottingham shows at The Social last summer. I think there were only about 15 or 20 people there...
Rob: That's right, and it was the same everywhere then.
Hugo: I think the 'Latchmere' video getting heavy rotation on MTV2 increased our profile as well, though...
Rob: ...But, again, that mainly coincided with the Gonzo dates.

Your videos seem to have got the band almost as much attention as your songs. Is there some kind of theme behind the low-budget, DIY ethic?
Hugo: No, not really. I guess we're just not into using big, elaborate monstrosities to promote our music. The video for 'About Your Dress' took about six hours to make, and that's long enough really. I don't think we're one of those bands who can be done with spending too much time jetting off somewhere, doing countless takes and retakes of the same shot that might only be shown for a few seconds anyway. What's the point?

Have you or the record label got high expectations for 'About Your Dress', out this week, in terms of a chart position?
Hugo: We haven't. We've never really had any expectations since we started the band to be honest. Obviously for the guys at Fiction it's a different ball game altogether: sales generate money for them and in turn that means they can release more records by the likes of us, so I can see their point of view as well.

What about the album? I know you've been busy recording songs for the record for a while now. Are you any nearer deciding the final tracklisting?
Hugo: We're almost there. I think it's going to be 12, maybe 13 tracks long, and most of the songs if you've seen us live or heard the singles you'll recognise...
Rob: ...Although it's not gone down too well, with a few people, that 'Bicycles' won't be on the record.
Hugo: That's one of the oldest songs that we still do every now and then and probably isn't a good representation of where we see ourselves going as a band, so it didn't seem appropriate putting it on the album.

Will there be any more singles before the album?
Hugo: We've planned to release two more, 'Lego' and 'Precious Time'.

Both of those have been out before in one format or another. Do you think you'll alienate any of your long-standing fans by putting these two songs out again?
Hugo: I'd like to think not. If anything the fact that 'Lego' was only initially a b-side on a very limited release, 'X-Ray', that is nigh on impossible to find and 'Precious Time' was a download-only single means that in some ways it is the first time both of these have come out as physical singles in their own right. We've also re-recorded 'Lego' and it sounds loads better than it did as a b-side, which was essentially our last demo before we got signed by Fiction.

A lot of your early demos are currently floating around on eBay for silly money. What advice would you give to any prospective buyers?
Hugo: I guess it's up to them what they spend their money on, but I think you'll be disappointed when you hear them, particularly if you've heard what the band are doing now. None of those songs from that five-track demo - 'Smoker', 'Spanishish' and the like - have survived and I think they were the first songs we actually wrote together, so were just learning our trade then. If you really need to hear them, download them off one of those file-sharing sites or something for free...
Rob: ...But please don't shout for them if you come to see us live, ‘cause we'll just ignore you!

Finally, for Hugo, being one of two brothers in the band, is there any sibling rivalry going on?
Hugo: Not really no. Certainly not onstage anyway! I think we complement each other really well, and we both bring different things to the band, even though essentially Felix and I are both lead guitarists. I think we've been playing together long enough to concentrate on what's important for all five of us rather than let any family ties get in the way...
Rob: ...And there's no way the rest of us would allow that to happen anyway. After all, there's still three of us, and only two of them!

The Maccabees’ 'About Your Dress' is out on Fiction Records right now. If you haven't already seen them live this year, do not despair as they're about to embark on their biggest tour to date, calling in at:

Check out The Maccabees on MySpace, here.