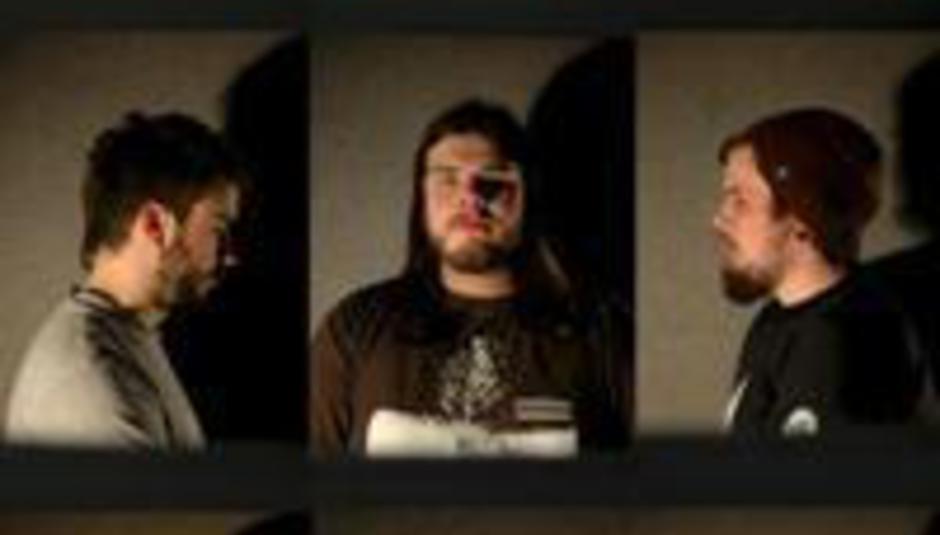 Carlisle-spawned Manatees are headlining this coming weekend’s DiScover Club at Notting Hill Arts Club, London, a free event booked by this fine website in collaboration with Rough Trade Shops. To say we’re excited to have them would be something of a massive understatement; we’re pant-shittingly expectant.

With comparisons tossed about to the tune of King Crimson and Isis, Manatees are monsters of rock through and through. Their sludge-doom-grind or something template is one followed by a fair few other acts, but the trio’s balancing of destructive bombast, eerie atmospherics and moving passages of introspective ambience is perfect. Their debut album stroke EP of last year, Untitled (released through Motivesounds in some truly special packaging), received rave reviews in the rock and metal press, and made Rock Sound magazine’s end-of-the-year best-of list. We played a track from it on the last DiS podcast – download it here – and the record is reviewed by DiS here.

The band comprises “three persons playing an array of electrical and percussive instruments”, to quote their MySpace site; parents, cousins and quite possibly pets know these three persons as Alex, Paul and Greg. You will know them as the loudest band to rattle and rumble the insides of the Notting Hill Arts Club in the venue’s history when you see them in the flesh, this Saturday, February 17. For full gig details, please click here or read to the end of the article.

Hello Manatees! Please introduce the members, what each of them does, why and how and where the band formed, and… um… each member’s pet preference: dog or cat, and why?

The band formed in late 2005 with the intent to play music that we, ourselves, would enjoy listening too. Originally we didn’t intend to do much with it, just play every now and again locally and so forth, but as we wrote more we felt the need to do the touring and releasing thing again.

We all already knew each other from playing in bands and knew we'd be comfortable writing tunes with one another. The band consists of three core members: Alex (bass / vocals / percussion), Paul (drums / percussion) and Greg (guitar / percussion / vocals). Other instruments and what not are played on recordings, but that's the general staple set-up when it comes to playing live.

As for pet preference, Greg and Pauley would choose spiders as were both scared shitless of them and Alex would choose cats because he's allergic to them.

The Untitled album not only looks great but sounds great. In all seriousness, you must be chuffed. Was it additionally great to receive such positive press for the album, and to be included in Rock Sound’s end-of-year list?

All of it’s been amazing. We never thought it would've have done so well 'press' wise. To be included in Rock Sound’s end-of-year list was a big surprise! It was weird seeing our name along side bands we highly respect (and some we really don't). Rock Sound’s always been good to us and Motivesounds since day one, so it was great to be included in a list like that, especially when you think of how many amazing albums were released last year that didn't even get listed!

Why was it so important – if it was! – for the record to be so fantastically packaged? Is this something the label really wanted, or are you, as a band, as keen on stressing the importance of art as recording great music? If that’s the case, what’s your position on people downloading only a few songs from albums, therefore breaking them into constituent pieces that, perhaps, should never stand alone?

The overall look of the packaging (the black on black, text, inlays etc) was a combination of Alex and Greg's ideas. They were then given to Magnus to sculpt into the final product. Motivesounds like their lavish CD packaging, so I guess they pushed the boat out when it came to us (‘cause i know it cost a bloody lot to manufacture!).

As far as packaging goes I feel for it to be a great cover it has to reflect the tunes that are on the CD/record it holds inside. And we will always strive to do that... and hopefully succeed!

The downloading thing doesn't really bother me too much. I personally download. I’ll download a couple of tunes, and if I like them then I go out and buy the actual real deal. I use downloading as a 'try it, if you like it, buy it' set-up. But I don't think I could ever just have music stored on my computer: that takes the fun out of it. I like collecting records and having a record collection. That's part of the fun about buying music, having a corner in a room of your house stacked high with shitoads of CDs and vinyl! I'd like to think that's other peoples mentality, but I know in the long run that it ain’t.

That was a long question, this isn’t: out of ten, just how loud is the Manatees live show? Should attendees come prepared with plugs?

We have been known to play quite loud. On a scale of out-of-ten I would like to say ten, but I know we could be louder. I would go for 8/10 for the minute, but in the future who knows? On our last tour we were asked to turn down in every single venue we played in! In one place we had the sound guy saying he'd had around ten phone calls from nearby residents complaining about the volume of noise emitting from his venue.

We just see volume as a way of forcing the audience to pay attention. I work in a venue, and I hate seeing people pay in to see a band just to stand at the bar and talk over them. What the fuck’s the point in that? The reason we chose to play at such a volume was to combat this.

You’ve been compared to King Crimson – is prog an influence on the band at all? Just how would you categorise the band’s ‘sound’, if forced to? Where do you sit in a line featuring Isis, Pelican, Yes and, I dunno, Swans…?

Yeah we all love a bit of prog. But we love prog just as much as everything else.

I really don't know how to categorise our sound. We get asked all the time and we don't know what to say! If there was a loud, noisy, dirge category, then I think we'd be in that. Between the bands you mention I’d say we'd lean more towards Swans. I like the way they can create the most horrible noise ever on one record and the most beautiful on the next. I'd like to think that is sort of the same way this band operates.

The show on Feb 17th is fairly varied, bands wise: have you had the chance to check out either Rolo Tomassi or Down I Go?

It is varied, but that's always a good thing: there’s nothing worse than going to a show when all the bands sound exactly the same. We've heard both Down I Go and Rolo Tomassi, and are well looking forward to playing with ‘em and seeing them do their thing live!

Since you’re driving all the way from Carlisle, are there any things punters can bring to make the ride back a little less bothersome? Are there any trinkets or home comforts you always carry with you on the road?

We've got Oxford (at the Wheatsheaf) the day before, so the drive ain’t too bad anymore. And we’re playing Cardiff the day after London, so that should be a bearable journey! But if the punters like that what they hear at the show then they could always buy our record from our merch table! That's always good! We've also got our friend nick coming along this time, so to make him feel at home. If you feel you've got a pump or a fart brewing run over and tell him. He loves pumps.

What does 2007 hold for the band: more releases, tours? Are there any places you’re really hoping to play, and any you’re keen to return to once more?

2007 will hopefully be a joyous year. We've just finished recording our second record. It’s a lot filthier than the first one, but somehow a lot nicer. So that will see the light of day sometime soon we hope. Also maybe another record after that one! This year’s plan, touring wise, is to get over to Europe. We've just started getting press over there, so hopefully we can sort something out. And hopefully a lot more places in the UK.

Manatees headline the DiS-curated DiScover Club at Notting Hill Arts Club, this Saturday (February 17) from 4pm ‘til 8pm. Also playing are Rolo Tomassi and Down I Go: look out for DiScover interviews with both acts later this week.

For full details of this Saturday’s show, and to add the show to your gig calendar, click here. Manatees’ tour dates around the London show are as follows:

Check Manatees out on MySpace