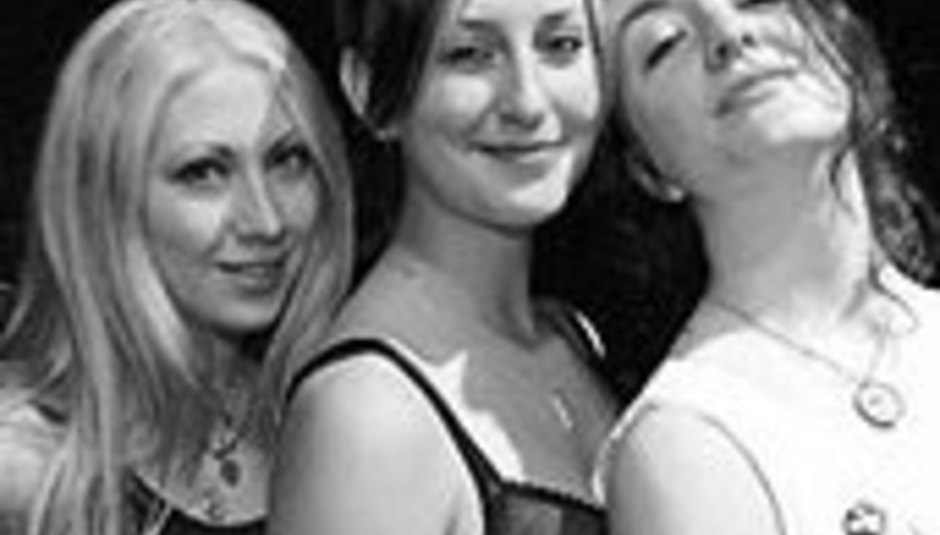 Whisper it: the UK punk-rock scene is currently at its healthiest for about three decades, and there's not even a safety pin in sight nor a jubilee on the horizon. Instead, the likes of Gallows, Lovvers and Nottingham all-girl trio The Smears are kicking up a whole different kind of fuss thanks to a combination of ballsy attitude, chaotic unpredictability and, of course, a spittle-drenched barrel of tunes.

The Smears - that's Emma (guitar/vocals), Natalie a.k.a. Miss Caulton (bass) and Colette a.k.a. C Doll (drums) - have been building up a healthy following on the Midlands underground circuit for the last three years. Now, with a new management deal and single release in the pipeline, the rest of the country is about to discover what we've been getting all excited about in Robin Hood country.

Sat in a swanky bar next to Nottingham Playhouse in the city's exclusive Park area, C Doll and Miss Caulton sink glasses of red wine while we await the arrival of their singer from the toils of her day job. It’s two days before the band play the monthly DiS Nottingham show, at the city’s Junktion 7 venue.

Your live show has gained a reputation for being compulsive and generally quite mesmerising, yet there still aren't many recordings available of the band. Will you be concentrating more on recording in the future?
Miss Caulton: I think it's because we are primarily a live band. We tend to do everything as if we're playing a show anyway. I just love the buzz of playing live. To me, playing live is the perfect end to a shitty day – sometimes I get to the point where I just don't want to come offstage. I think that's why we've concentrated all our efforts so far into getting the live show right first. You should try it sometime!

So is going into the studio your least favourite thing about being in a band?
Miss Caulton: No, I'd say that's got to be having no money!
C-Doll: We've got a band fund that we started, to try to raise money so we could do more shows outside of the Midlands, but it rarely gets above mere pennies...
Miss Caulton: ...And a lot of that is because we rarely get paid what we think we deserve, and in a lot of cases what we've been promised by certain promoters.
C-Doll: Without naming names, there are certain promoters in this city who should be ashamed of themselves. They book us because they know we regularly bring a good-sized crowd, charge people on the door, charge extortionate drinks prices then don't give you as much as a ‘thanks’ at the end of the night. I think that's where we've been quite naive in the past, but hopefully with our new manager things will change...(at which point guitarist and singer Emma walks in)
Emma: Worst thing about being in a band? Getting ripped off, definitely.

Although Nottingham has a vibrant music scene and a good of really good bands, no one has really made it big on a national scale for a long time. Do you see yourselves having to move away from the city eventually?
Emma: I think one of the biggest drawbacks here is that most of the Nottingham bands are trying really hard to create a scene in the city, and sometimes that can get in the way of what you really should be trying to achieve on a more wider scale. We were probably guilty of that to start with, and I think that's why it's taken us so long to get noticed anywhere else.
Miss Caulton: I like the Nottingham scene, probably because of the whole diversity of it. I mean, you can hear a band for the first time and know straight away where they come from because all the other bands in that city sound exactly the same, but here you really don't get that.
Emma: The only gripe I've got with Nottingham is that some people in bands can be very nasty and unnecessarily critical of people in other bands, whereas in Leicester, for example, they all seem to bend over backwards to help one another out.

Tell me about your songs. They seem to be inspired by bad experiences with certain members of the opposite sex. True or false?
Emma: To an extent I suppose you could say that, but at the same time we don't want to be seen as some boring girl band that just whinges about some ex-boyfriend or another, either. I like to be very cryptic about what - and certainly who - I'm singing about. Sometimes it may be obvious, but not that often...

What influenced you to form a punk band in the first place?
Emma: I started a band back home in Liverpool but it never really got off the ground, so when I came to Nottingham to study that gave me the incentive to start a band again. My main reason for studying was to be able to get a student loan so I could afford to buy a half-decent guitar and have enough spare time to learn to play it.
Miss Caulton: Around the same time, I put a poster up asking for girls only to play in a punk band as I'd been playing in indie bands really badly and I was sick of playing with boys. My poster just said something along the lines of, "I don't care if you're shit at playing music, as long as you're a girl you're in!", and Emma answered straight away.
Emma: We could never find the right drummer at first, though. I think we got through five drummers before C-Doll joined.

You're currently being courted by one or two labels about the possibility of a single release in the near future. Have you decided which songs you want to put out on the record?
Emma: We're putting a record out in March through Org Records. 'Bring It On', definitely, will be the a-side. Possibly 'Pink Pop' will be on there as well.

If a record label wanted to sign you on a long-term, six-figure deal but imposed certain terms and conditions such as asking you to change your image or record cover versions, would you do it?
Miss Caulton: Six-figure?! No I wouldn't... Maybe if it was a little bit more I probably would!
C-Doll: Not with the cover versions though, at any cost!
Emma: But free clothes are always a bonus!

You've played several high-profile shows with some of the first wave of punk rock's finest, most notably Charlie Harper and UK Subs. What was that like?
Miss Caulton: Charlie is great. He wrote a song for us and we're supposed to be writing him one back. Their audience can be quite intimidating, though.
Emma: The last time we played with them it was really nerve-wracking, almost as if someone had placed a twelve-foot high barrier between us and the crowd...
Miss Caulton: ...But we won in the end!
Emma: It wasn't as if people walked out or anything, they just stood there with their arms folded showing no emotion.

What about reactions from the music press? Are there any that particularly stand out?
Emma: Yeah there is one, and it's not from the music press as such - most of those have been really positive. No, this one was from the Nottingham Evening Post, and it was just such a badly written piece of crap that seemed to concentrate on what we were wearing rather than what we sounded like. To me, whether something is positive or negative, if it's badly written or out of context with what we're about then it's not worth the paper it's written on.

Does it worry you that people may not take you seriously because you're three girls playing punk-rock rather than three blokes?
Emma: There's no point worrying about it.
Miss Caulton: That's who we are, that's how we dress. Deal with it.

Do you see yourselves as being role models for other girls who might want to form bands?
Emma: I'd like to think so, yes. We get girls coming up to us a lot at our shows asking what it's like being in a band and where they should start, and my answer is usually along the lines of, "Stop wearing those fuck-me boots and start wearing some Fuck You boots!"

The Smears are expected to be playing at several festivals this summer and recommend that you also DiScover Dead Souls, Yes My Ninjas and Swallow.

They are also confirmed to play the following dates:

'Bring It On' is out on 19th March as part of Org Records' Org-an-ised singles series.

For more information on The Smears visit their MySpace.