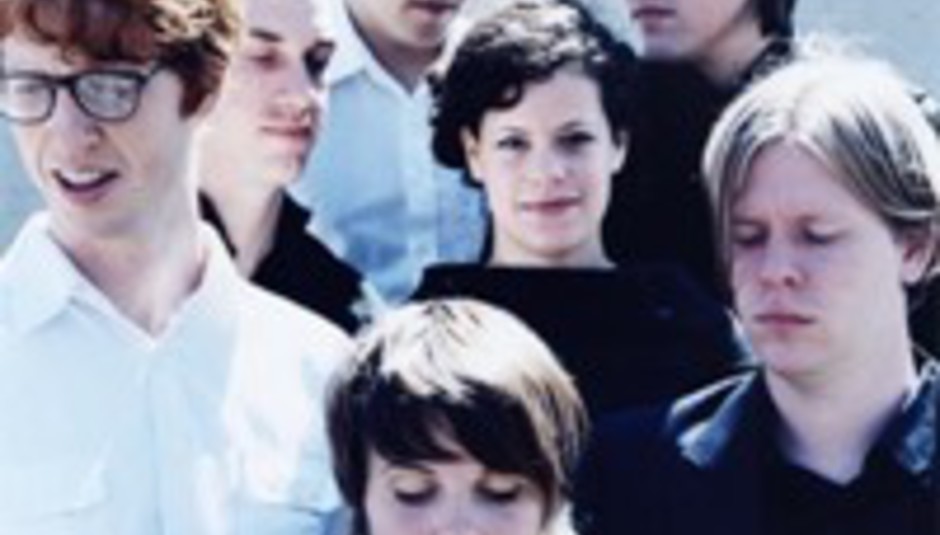 Arcade Fire are, officially, A Big Deal. DiS recognises this, so sent three of its finest pen-pushing purveyors of purple prose out into the London crowds to grab tickets to some of the Canadian collective’s super-sold-out shows at the city’s St John’s Church and Porchester Hall.

First in were words from Chris Alcxxk, which can be read here; do take the time, too, to click your way to Chris’ neat diagram of the band’s irregular end to a set of ups and downs. Then, the DiS inbox bleeped twice: more pieces of critical praise for the band that releases their new Neon Bible album in March.

So here we have both a second and third opinion on Arcade Fire’s recent visit to the UK, where they elected not to play the soulless arenas they’re due to fill in March, when they return to British and Irish shores. Feel free to comment with your own personal reviews of the shows after these words from Will Dean and Rob Webb.

For a band that explores religion and death in so much of their material, St John's Church in the heart of Westminster couldn't be more of an appropriate setting for Arcade Fire to premiere their eagerly awaited second LP Neon Bible.

Virgin-white pillars twist up to the ceiling on either site of the stage and a blood-red curtain towers over and behind the band; onto it is projected the album's signature artwork. The tone, at least among the audience, is one of hushed reverence.

"Get the fuck up!" orders band leader Win Butler, shattering the silence after his eleven-piece ensemble march into the middle of the hall and begin their set with an acoustic, megaphone-powered version of Funeral staple 'Wake Up'. Extraordinary doesn't even begin to cover it.

After the fuss over their Funeral-period live shows it was hard to imagine how Arcade Fire might up the ante on their next trip to these shores. The simple answer is that they've thrown even more into what was already an overflowing musical melting-pot.

The ominous drone of Regine Chassagne's hurdy-gurdy on 'Black Mirror' signals an even darker direction, unthinkable after their debut drew so heavily on the deaths of band members' relatives. But the proof is incontrovertible: "their names are never spoken / the curse is never broken" hiss Chassagne and Butler in unison. Hairs stand firmly on end and I'm reminded why I fell so in love with the band. It's moments like this – these brief musical epiphanies – that only the most special of bands can conjure.

---
"...all this untested material sounds as fresh and exciting as that fateful first listen to 'Tunnels'...
---

So it is tonight. The shimmering rush of 'The Well And The Lighthouse', the manic cacophony of horns and violins bringing the aptly named 'Ocean Of Noise' to its mind-bending finale, even the Springsteen-esque 'Antichrist Television Blues': all this untested material sounds as fresh and exciting as that fateful first listen to 'Tunnels', or tonight's encore highlight 'Laika'.

Of course, the Neon Bible stuff is still so new that there's an inevitable rawness; at times puzzled expressions and furrowed brows form on the faces of both audience and band members, but tonight that just serves to render the communal highs even more dizzying. What gets them through the stickier moments is their obvious passion for, and total belief in, this set of songs.

It doesn't matter that Funeral material is thin on the ground, because they've somehow surpassed themselves. Steeped in ethereal gravitas, loaded with even more chest-thumping, heart-bursting moments than its predecessor, Neon Bible live is an experience these chosen few won't forget in a hurry. No, tonight is a night for the believers to take with them to the grave; an evening on which Arcade Fire took their rightful place as one of the most important bands of the 21st century.

Once in a generation a band comes along that stops you dead in your tracks. One that even in the disposable world of recorded music can make you stand wide-eyed and awestruck at the noise they’re making. Radiohead did it, The Smiths did it. And for Tony Blair’s generation of young mugs, Arcade Fire might well do it. They’re simply that good.

So here they are, at the last show of a five-night run that’s entertained some of the great and good of the music world, as well as some lucky, lucky ticket-holders.

Porchester Hall is a simply perfect venue for a concert like this. And it is a concert, not a gig. From red-carpeted stairs to the chandeliers hanging from the ceiling, to the massed gathering of fans from across the Atlantic, you know this is an occasion.

The sound can’t have improved massively since Monday’s show in Westminster’s St John’s Church as opener 'Black Mirror' still sounds somewhat lost among the anticipation of a crowd that’s been stood in the same spot for and hour and half with only £4 plastic bottles of Carlsberg for company.

But if a massive anti-climax seems the only logical conclusion for series of gigs that looked they could go down in Anglo-Canadian Indie-Pop History, ‘Keep The Car Running’ is fan-tas-tic. When debuted on Zane Lowe’s show last week it sounded good. Here it sounds like a clarion call. Ditto ‘No Cars Go’. These kids definitely know.

Dressed like a long-lost Walton brother, Win Butler tells the crowd about his night wandering around London watching a fox. He didn't get to bed ‘til 10am and it's pretty evident later when introduces the ten-person ensemble gathered on the tiny stage. Win forgets to introduce Tim Kingsbury, who’s standing right next to him – “There’s too many people in this band,” he says by way of explanation. To be fair it’s hard to keep track of everyone as band members swap instruments with wanton abandon.

'Power Out' and 'Rebellion (Lies)' are joined together by a noisy segue-way which must be one of the finest aural experiences these ears have ever enjoyed. They’re two of only four Funeral songs of the evening but, by golly, they make for ten minutes of absolute musical ecstasy. Neon Bible has an unenviable task in following it, you fear.

---
"Without having to ask the crowd to hush Arcade Fire manage to make 'Wake Up' sound great, even when they are surrounded by a mob of diehard fans with camera phones"
---

While the highlights are obviously from Funeral it’s an immensely difficult task to get an audience excited about music they’ve not heard before, even for a band as, and I use the word lightly, great as Win Butler’s flying circus.

One of the things that has made Arcade Fire such a brilliant live band is that each band member is so utterly watchable. It’s akin to watching a really good football team. It’s almost as good watching the players’ movements off the ball than it is to see them with it at feet. So, when Win is stage centre, singing so hard that sweat pours from his chin, you can quite happily have a nosy around to see Regine throwing her voice box through a megaphone or Richard Reed Parry bashing away at a drum.

As they leave the stage after an encore of ‘Antichrist Television Blues’, Arcade Fire begin one of their now-familiar processions into the crowd. You have to think this will be one of the last times they’ll do this. It’s tricky enough in a venue this small – try doing it at the expansive auditoriums of Brixton’s Academy and Manchester’s Apollo. Of course, we can’t see anything except the top of Richard’s double bass as they make their way into the middle of the room to play ‘Wake Up’. Without having to ask the crowd to hush they manage to sound great, even when surrounded by a mob of diehard fans with camera phones.

It wasn’t quite the religious experience we expected, but it was very, very good. Not quite an ‘I Was There’ to rival The Free Trade Hall or Spike Island, but not a million miles away.