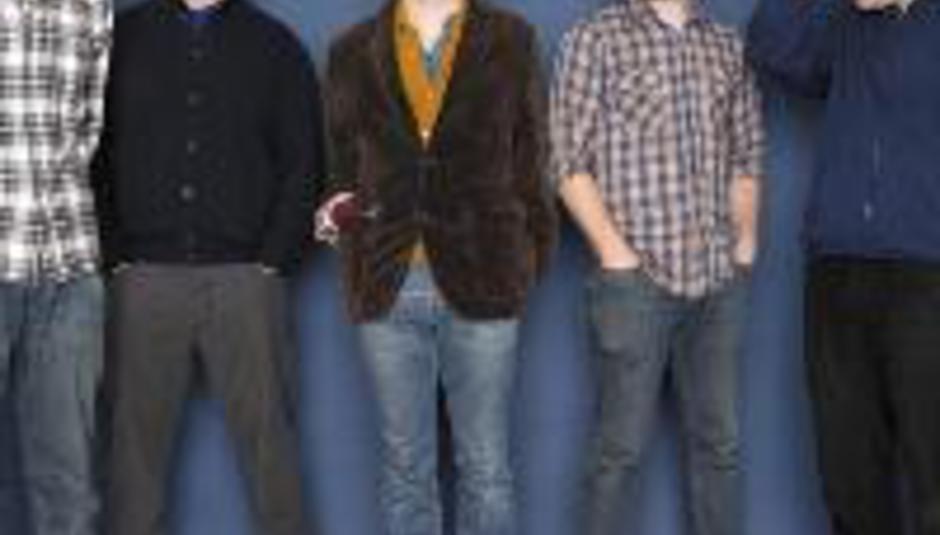 Alec Ounsworth has been listening to Leonard Cohen. He is not smiling.

Headphones off, he settles at a table with only DiS for company; in the background, a speaker pumps Heart or Magic or some other middle-of-the-road FM station into the bar area of London’s Columbia Hotel; Alec is staying here with his band, Clap Your Hands Say Yeah. Tonight they’ll play an invite-only show in Soho, but first there are promotional duties to attend to.

Promotional duties born in the wake of the completion of the band’s second album, the follow-up to 2005’s self-released long-player that had DiS’s across-the-sea peers at Pitchfork foaming at the ears to the tune of a 9.0 review. Clap Your Hands Say Yeah’s successor is Some Loud Thunder, again self-released stateside but handled by Wichita in the UK. So far reactions have been mixed to say the least – fence-sitting doesn’t seem to be an option when a much-revered new band’s sophomore LP is concerned.

Alec (pictured, centre of five) grumbles something about NME’s less-than-flattering review; he says the band’s relationship with the paper isn’t so much love-hate as simply the latter. He has no time for it, but we agree that it does serve to introduce kids to new music. It’s just unlikely that any readers will pick up Some Loud Thunder off the back of its critical mauling.

“I don’t know what most people are looking for when they approach music these days,” he says wearily; with each breath his voice drops, becoming enriched with bass until a period’s chicaned around. It’s rare that he finishes his sentences properly. “All we can hope for is that people understand what we’re trying to do. In no way would I ever approach any of our work as something that’s trying to throw people off. I mean, it is what it is for a reason.”

But people – at least people operating as critics of contemporary indie music – have been a little thrown off by Some Loud Thunder. To date, many a critique has been dumbfounded by the album’s direction, one so different from that of its predecessor. The reason for the difference in sound, style, depth of texture and level of experimentation is a simple one: this time the record was written more or less by the band. Ish. The self-titled was, in essence, a solo album completed with the assistance of then-session musicians. Ish, again.

“On the first one, a lot of the tracks were straight-up playing of what I’d done personally on demos. On the second one it was a little more… insight-ly? It’s more collectively-minded, I think, just because I feel that the guys in the band had to get a handle on the first album’s songs [at the time] but for the second one they already had knowledge of them.”

Said ‘guys’ are Tyler Sargent, Robbie Guertin, Lee Sargent and Sean Greenhalgh; the five-piece have been together since 2005 (at least), and call both New York and Philadelphia home. Alec resides in the latter, and openly regards himself as something of a control freak.

“I’ve written pretty much all of the songs, but generally it’s a collective effort as things begin with certain suggestions. I’m open to ideas that these guys have, because there’s more stuff that I won’t bring to these guys. I’m bringing them songs that I think I trust these four people with. I trust their instincts on these particular songs, but nevertheless I’m quite controlling.”

Being so minded, does it bother you at all when people interpret the songs in ways that are inaccurate?

“You mean a reviewer? No, because more often than not I laugh at it. But that’s fine, as everyone can have their own interpretation. I don’t feel the need to explain the songs. People are supposed to consider them for themselves. I’ve never found too much interest in anyone else’s explanations of his or her songs.”

Do you think a degree of ambiguity in lyrics aids a band’s longevity?

“Sure. If something works, then it should work for a long time and for a lot of different reasons.”

It’d be natural to expect CYHSY, and particularly Alec, to feel an additional amount of pressure upon their shoulders around the release of Some Loud Thunder. After all, the first album was very much a word-of-mouth, or word-of-internet, success, but this time the knives are already out. But Alec’s unfazed by the increased level of attention: “It seems about the same. Expectations are a little different, but not too much. I don’t think I’m affected by other people’s perceptions or expectations.” And he’s had time, too, to reflect upon the material that makes up Some Loud Thunder: the record was completed in September of 2006. Just waiting a few months for an actual release date, though, was difficult for Alec.

“I never see the point of sitting on an album – this was something of an experiment. I was wary of sitting on it, even for this long, as when you’ve something to present to people you might as well present it.”

Was there any concern that the album might be leaked online, in much the same way as your label-mates Bloc Party’s latest album?

“I think that the primary problem with something like leaks is that they’re a relatively perverted way to listen to an album. It’s probably in a form that’s not mastered or mixed, and you have to add to that you’re listening on a computer, which to me is never the right way to listen to any album. I think for all of these reasons it’s a problem, but on the other hand I don’t know what can be done to stop it. I understand – people tell me it’s inevitable.”

In some cases it can serve to raise a profile, or resume interest in an act. And you’re a band that has genuinely benefited from coverage on the internet…

“Yeah, we’ve benefited from internet coverage in a way, if you mean ‘benefiting’ as meaning the raising of our profile. That’s true. To qualify ‘benefiting’ is important, as there are downsides for sure. I’ve started slowly cancelling out things like cell-phones, and I might get to e-mail and internet someday, because it’s created this ultra-commercialisation, where you’re listening to some band the same way that you’d… I don’t know…”

You think that listening to music online is a little too much like shopping in a supermarket: there’s loads to pick so you dip in and out of aisles without ever taking in everything that’s there? You never get a full idea of an album, or even a band?

“You do pick and choose, but it’s funny ‘cause a lot of websites create an atmosphere of overload. While it’s good for people to know a lot about music, there’s still this sense of a fast-food quality to music these days, which is disappointing as there’s some stuff that’s really good but it’s surrounded by the fast-food.”

And what are your feelings on consumers buying only a handful of tracks from an album, digitally, rather than getting a whole long-player? Listening habits do seem to be changing…

“That’s a little bit what I was getting at. Nevertheless, people have their own way of going about things, and I’ve never been one to tell people what the best way is. I just like to do otherwise. I’m pretty selective about what I listen to, and there’s a certain embrace of an album… particularly, I embrace a musician’s work. I have all of Jonathan Richman’s albums, and those by Bob Dylan and Neil Young and Bruce Springsteen… I just don’t understand those that want to download individual songs. I suppose I feel sadly amused, but y’know…”

What about remaining D.I.Y. in the US? Why choose not to sign with a label? You must have been inundated with offers after the first album…

“I see no reason why we would sign with a label when there’s no legitimate reason to do so. We’d proved one wasn’t needed, and nobody gave us good reasons to sign with them. There’s been the question of whether or not record labels have been able to make lives of musicians easier, but my problem is that I like to stay in control of most things. By the time something gets to you… I think, eventually, labels wear you down so far that you give up Y’know, if you don’t sell X-number of albums then you’re out of the label. You should not have a prediction of a number.”

CYHSY kick off their UK dates (click here or see below) tonight. The shows won’t be their biggest in the UK, at all, but Alec’s again upbeat about the environments he’s about to perform within.

“Shows are usually before a thousand people, or something like that. We played in Philadelphia and New York recently, at smaller shows, so it’s kinda comfortable for us to play the new stuff now. The increase in crowd numbers been pretty gradual: we’ve played for 10,000 people, and 5,000, and 2,000 and a hundred… If I had a choice, and I like both big and small shows to a point, the smaller shows are a bit more natural. Last time we played here it was at The Forum in Kentish Town, so I like the idea of turning it down a little bit.”

Londoners can catch the band at Shepherd’s Bush Empire this time around. And what about the summer? Will we see CYHSY at any domestic festivals?

“As far as festivals are concerned I’m not really sure yet. We did Reading and Leeds last year, but they seem pretty impersonal I’ve got to say. A lot of people are passive observers in a lot of respects. They wouldn’t necessarily come to your shows, which is fine. It’s almost an opportunity, in a way, but on the other hand playing shows for people who are very enthusiastic is a much nicer feeling.”

And just like that, a smile cracks across the face that was, initially, positively statuesque. Alec slips his headphones back on and returns to a Cohen immersion; his bandmates have already departed in readiness for the night’s show, so he walks back into a room housing only a representative from his label. A firm handshake later, he’s disappeared, too.

Some Loud Thunder is out now via Wichita; they also released the band’s debut in the UK. For more information, and to hear songs, click to CYHSY’s MySpace, here. Their live dates are as follows (support from Elvis Perkins):