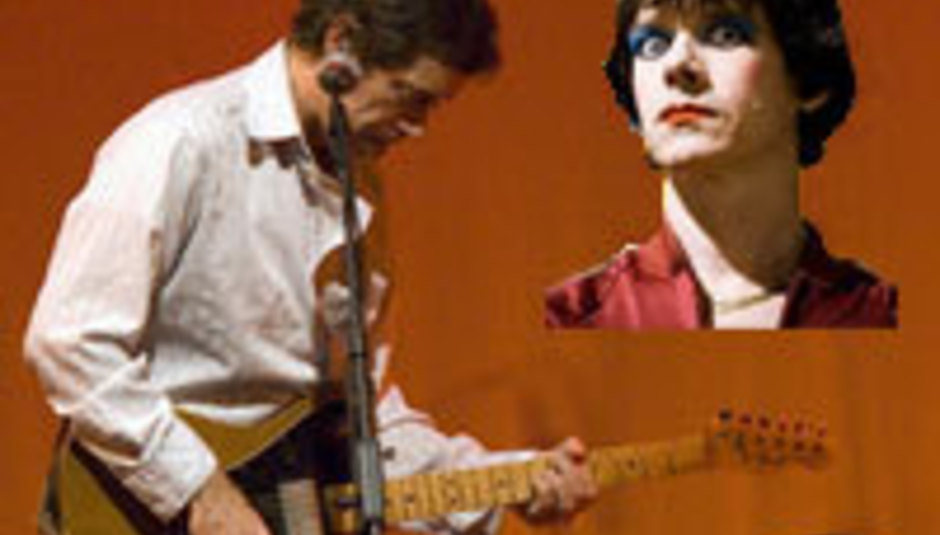 In one corner, Califone’s Jim Becker; in the other, Bobby Conn. Both have called the Thrill Jockey label their home away from home these past many recording years, and now they must face each other in a trivia-based battle for critical survival. The loser will never have a record reviewed on these pages again; the winner, we’ll love like a band awarded an 8.7 from Pitchfork. That, folks, is hella lotta love.

Only, we’re fibbing, slightly. There are no corners: Jim and Bobby sit on a small couch in the Camden Dingwalls dressing room ahead of a show headlined by the former’s outfit. Bobby is the special guest – on first and headlining across town later on. Also, we’ve already covered both acts anyway: click here to read our appraisal of Califone’s latest, Roots & Crowns, and here for Conn’s 2003 long-player The Homecoming.

But, this is a quiz nonetheless; a Thrill Jockey pop quiz, to be more specific. Seven questions on the label responsible for so many of the competitors’ releases to date: only one champion of alternative music can emerge victorious. Game on, as they say, sometimes, on the telly.

DiS: This might be easier still: who founded the label, in 1992?
Jim: Um, let’s see here… Bettina? Bettina Richards?
That’s correct! Shall I put a little star beside your name here?
Bobby: Wasn’t it Mr Chest that started the label? What’s Mr Chest’s first name…? No, no, it was Isaac Hayes.
Does Isaac Hayes have in interest in post-rock?
It’s what he’s been into for a long time. Thrill Jockey’s just a subsidiary of… what’s that label in Memphis?
Stax.
Stax, yeah. It should be.

DiS: Okay, that’s one-nil to Jim, then. Thrill Jockey’s based in Chicago as of today, but in what city was it started?
Jim: New York.
Is absolutely correct.
Bobby: I was going to say Poughkeepsie.
You know, the label got made because some band on the label got ripped off by Atlantic Records, but we won’t go into that.
We’d best not. Lawyers aren’t nice. But what’s the appeal of Chicago over New York?
It’s cheaper. That’s a big part of it.
Any sights you’d recommend to the visiting tourist?
The Humboldt Park Lagoon.
Yeah, that’s a good one.
The Garfield Park Conservatory, especially in mid-winter. They have a tropical dome, so it can be 18 degrees below zero outside with snow on the ground, but you go inside and it’s humid and sweaty.
We actually live pretty close to each other. When I was ‘married’ – that hellish experience – I looked at your house.
Really?
Like in 1990. And when you bought that house, I couldn’t believe it.
It was a crazy deal when we bought it, in 1997. It’s a great little house.

DiS: That’s two-nothing to Jim. Now some questions on the label’s bands. The band Tortoise…
Bobby: It’s pronounced ‘Tor-twows’.
Jim: In Chicago it’s ‘Tor-twar’.
It’s probably missing an accent in the transatlantic translation. But what year was the band’s self-titled debut released in?
1993?
1994!
Yes, so it’s two-one.
It’s a great record.

DiS: Now this is where you, Bobby, should catch up. The code ‘Thrill 155’ relates to which Thrill Jockey release?
Bobby: Well, I’m assuming it’s one of my records (laughing), but I really have no idea!
Jim: Er, the beach record… the beach cover record…
What, The Golden Age album?
No, no… it’s Live Classics Vol. 1.
Actually, that’s a record I’d prefer to forget.
Okay, we’ll strike that from your permanent record.

DiS: To make things fair, a Califone-related question. What score did Pitchfork award Roots & Crowns?
Jim: Seven?
No no, you’re too pessimistic…
Bobby: Nine point nine-nine-two?
Don’t they have a ten-thousand point scale now?
I don’t know. I think they grade albums in Turkish Lira now. But it was 8.7, anyway.
Oh!
As a bonus question, they gave one of my records a 3.24 or something. I forget which record it was. (DiS: they gave The Golden Age 2.9, click)
They’re based in Chicago right? Can’t you go round there and make them show their workings?
They not only… I’m digressing here, sorry. But they not only gave it a bad review but actually attacked some guys personally in the article. These poor guys… you know Nick Sula?
Yeah.
They were like, “This record is so awful. Why didn’t Colby Stark stop him? What were they thinking? Why’d they let Bobby Conn make this terrible record?”.
That’s impressive, that they were that upset.
I’d love to find the little shit that wrote that and kick him in the balls. But he’s probably wealthier than I am…
Sour grapes, Conn, sour grapes…

DiS: Another fairly high-profile act on the Thrill Jockey roster is Giant Sand. But what was Giant Sand’s original name?
Bobby: Grains Of Sand?
Jim: Green Giant?
No, no… it’s got something to do with something that crawls through the ground… think of Tremors, the film.
The moles? The voles?
The Giant Sandworms.
That was tricky. So that’s true?
Apparently.
Like, one day they just woke up: we’ve gotta cut out the worms.
I would have changed it to Giant Worms. I may release an album called Giant Worms. As a tribute? Ha ha, yeah maybe.

DiS: Okay, where are we? Is that still two-one? Anyway, Trans Am. They’ve a new album coming out on Thrill Jockey, but what’s it called?
Bobby: I know this, but I’m trying to think of a funnier answer. Errr… The Transvestite?
The Pre-Op?
Yeah, The Pre-Op! What about Fully Functional? Sexy sexy…
Jim: One of the guys from Trans Am is coming tonight actually. Seb, the drummer.
It’s Sex Change. I haven’t listened to it yet.
I should have brought a copy with me. I could have awarded it to the winner.
Oh, I have it.
You could have given the spare away, as a gift.

DiS: That’s two-all then, which makes this the decider. Mouse On Mars released an album in 1998 called Glam, but was it originally conceived as the soundtrack to a play or a film?
Jim: A Clockwork Orange.
Bobby: A play!
The Sound Of Music.
This is the decider. Bobby’s saying play, so you’re saying film?
Yeah.
It was a film! Although I couldn’t tell you any more than that. I don’t even know if it came out. I didn’t check IMDB.com before coming out. Should have done more research, really… But I hope you’ve both had a lovely time?
It’s been great.
Did I get any right?
Jim won, but I think you got some… two.
That’s pretty good. That’s about how I did in school.
Whatever it breaks down to, you’d best ask Pitchfork to calculate.
That would be an F. With a ‘See me’ written on it.

Bobby Conn’s King For A Day is released through Thrill Jockey on February 26; Califone’s Roots & Crowns is out now, available at all shops that aren’t rubbish. Califone’s upcoming tour dates are as follows:

Check out Bobby Conn on MySpace here and Califone here.