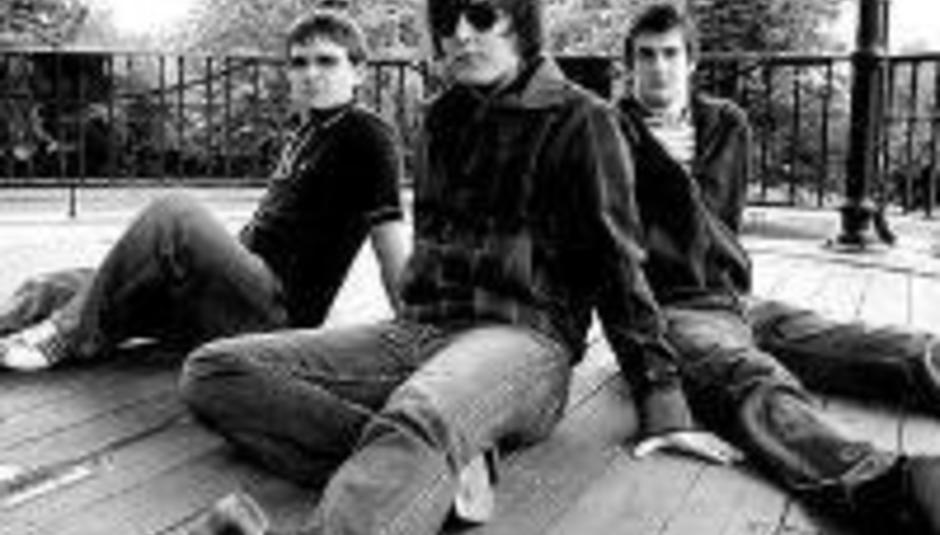 Ilkeston is one of the bleakest places you would care to mention at the best of times. Situated smack bang on the borderline between Nottinghamshire and Derbyshire, it doesn't have a lot going for it bar the usual alcohol-fuelled punch-ups at the weekend.

Yet within its ravaged confines a revolution is taking place. Whisper it quietly but local trio Censored are on the way to becoming the biggest band in the East Midlands thanks to a combination of infectious tunes, classic songwriting and sheer hard graft. Their live shows have become events of almost legendary status over this past year, and with a widely acclaimed appearance on the unsigned stage at the 2006 Carling Festival and a Club NME tour behind them, the next twelve months look set to be an onward and upward journey.

The band - Nathan Clarke (bass and vocals), Matt Henshaw (guitar and vocals), and Chris Goring (drums) - have been playing together since their teens, and now, with the average age of the band still only 18 years and 10 months, their The Great Escape club night has fast emerged as one of the main fixtures on any self-respecting music lover's calendar.

DiS caught up with Matt and Chris prior to the New Year's Eve festivities. Let old acquaintances be forgot...

How would you say the band has developed over the years from being a bunch of school friends playing together to what is now, to all intents and purposes, a serious band?

Matt: I think being older we've become a lot wiser. We've learnt our craft over that time, writing new material. We're quite stubborn in that we never just played covers from the beginning like a lot of young bands tend to do. We've built up a hefty collection of songs since the start, which makes us different from a lot of similar bands our age who just turn up in their late teens having not been together long with not a lot more than a fashionable image and no real songs of any note. It sounds sad in a way but we are starting to do this as our day job now.

Matt: Yeah, that's right. I think the nearest place you'll find anyone as organic and fully formed as us is probably Manchester, at the minute. There's no one else really doing what we're doing, which is weird because I can't really put my finger on what we're doing either, as far as pigeonholing is concerned. When I say we're different, I mean it in that we're a melodic band but we're not afraid to use catchy tunes as opposed to some bands whose ethos is to be different for the sake of it and end up sounding unlistenable and totally tuneless as a result.

So when it comes to writing songs, do you concentrate more on the lyrics or the tunes themselves?

Matt: I think it's more about the whole package. A decent song has to have a good melody and interesting lyrics. Generally, the tunes just develop out of practice room jams, and then me and Nathan will spend some time writing and improving lyrics to fit in with them. There's a real democracy in Censored that again perhaps isn't so evident with other bands.

Matt: Since June (2006) we've done absolutely loads of shows. Setting up our club night at Junktion 7 has been the best thing we've done, though, and I think that has helped people become more accustomed to the band. It's a big achievement to have set something up like 'The Great Escape' in a place like Nottingham, particularly as its music scene is very set in its ways, and have it run so smoothly and successfully.

What gave you the incentive to start your own club night?

Matt: Well there is a lot going off in Nottingham, and without sounding condescending to other promoters or club nights, there wasn't anything that seemed to have a real buzz about it, and they were mostly very elitist in their make-up, so we wanted to create something of our own that would have a much wider appeal and less pretentious feel about it.
Chris: There are too many cliques in Nottingham, and even the smaller cliques seem to have no more ambition than becoming part of or surpassing the bigger cliques.
Matt: We're just three lads from Ilkeston and we just wanted our part of Nottingham really without becoming part of a clique, and I think the vibe at 'The Great Escape' is positive and welcoming for everybody, almost like being part of a group of hippies without actually being a hippy.

Do you feel more comfortable playing in front of people as opposed to being cooped up in a studio?

Matt: I don't know to be honest. I guess we're more used to playing live but we just feel good about being in a band. I think the three of us playing together is the best thing in the world!

There is a bit of an A&R buzz around the band at this moment in time. Would you ever compromise anything for the sake of a record deal?

Matt: It depends what it is. I mean, I could sit here all blasé and act cool and say, "We'll never compromise anything", but we're always changing anyway, so who knows where we'll have evolved to in a year's time? I see being in Censored as being more like a journey than just playing in a band, because there are so many different places we're trying to get to and even more different ways of getting there. I mean, there are certain things we wouldn't do, such as write songs to sound like a certain band or style of music just because a record label wanted us to.
Chris: I suppose it’s a bridge we'll have to cross when we come to it.

On your MySpace site you've got over 8,500 friends and counting. How beneficial has this type of medium been for you and do you see it continuing for other up and coming bands in the future?

Matt: Well there's no doubt it's helped us get noticed over the last year or so. Sometimes, though, I fear that it might make people lazy when it comes to discovering new music because there's no inclination for people to be active. When punk first got big in the ‘70s, people started their own fanzines and bands formed around that, but MySpace sort of takes any of that DIY enthusiasm out of the equation.
Chris: I think there is also a danger as well that bands are just adding friends to make them seem more popular than they actually are. I think it's good that people get to hear your songs earlier than they would have in the past...
Matt: ...but even then a lot of the songs unsigned bands like ourselves put on MySpace are just demos, mostly home recorded, and therefore not of a particularly great sound quality, so that could have an adverse effect as to whether or not people would come to a show or buy a record as a result.

What are your ultimate ambitions for Censored in 2007?

Matt: This year to get a record out, ultimately to be remembered. I've got personal ambitions such as a desire to play the Empress Ballroom in Blackpool or the Royal Albert Hall.

In 2007, Matt and Chris think that we should be DiScovering The Response from Derby, Nottingham's Made In The 80s and Kids In Tracksuits, and Leicester band The Dandelions.

Censored play the Nottingham Drowned In Sound club night on Saturday 13th January (Add yourself to this gig using the DiS Gig Calendar, HERE), and then play the following dates:

For more information on Censored visit their MySpace HERE.