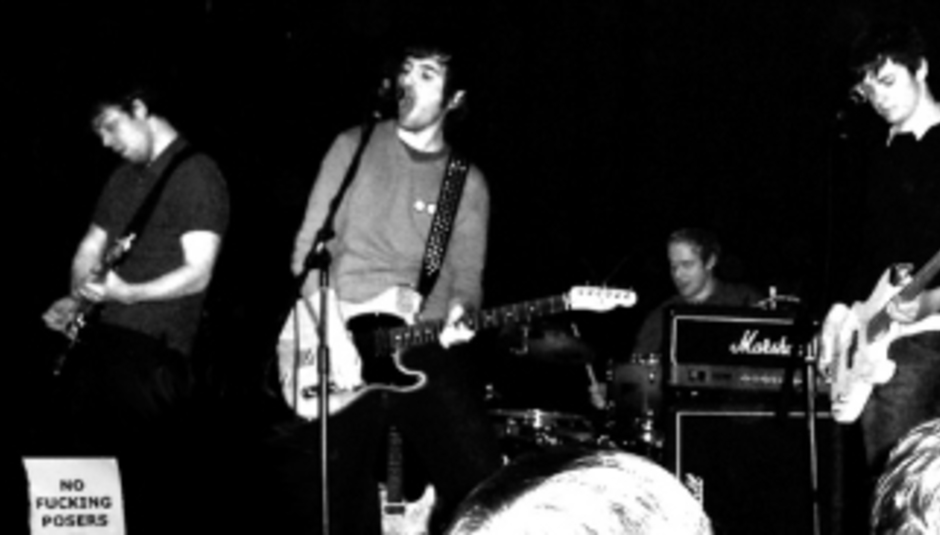 For Newcastle foursome Kubichek!, the phrases "About to happen" and "Next big thing" seem to have followed them around almost extensively since they first burst onto the scene some fifteen months or so ago with the glorious disco-punk seven-inch that was 'Nightjoy'. Add to that the fact that they are currently one of the most exciting live propositions in the country and you have the perfect recipe for instant success. Surely...?

Consisting of Al McDonald (vocals, guitar and currently laid up with a throat infection), Mark Nelson (guitar), Michael 'Frog' Coburn (bass) and Chris McGreevy (drums), Kubichek! are one of those bands who also seem to inherit a modicum of bad luck just as they're about to break, as their frustrations at broken promises from A&R men over record deals and cancellation of the first half of their current tour (due to said throat infection) perfectly illustrates.

Thankfully, the band are now at their happiest for some time, due in no small part that they've finally found a label (30:30 Recordings)who appear to be on their wavelength, and more to the point, don't put unit shifting in front of artistic merit, a rare commodity in the music industry these days.

With all the plaudits you've had from various sections of the music press and the fact forthcoming single 'Outwards' has been playlistedby MTV2, it must be doubly frustrating that you've had to cancel the first week of the tour?

"Yeah it is, but there was no way we could do the shows. Al's tonsils had swollen up like golf balls, and even if me or Mark took on the lion's share of the vocals and left Al to play guitar, the fact we were all travelling around in the same van would probably lead to some kind of bacterial cross-pollination and we'd all end up being struck down with Al's infection!"

So will the cancelled dates be rescheduled?

"We're hoping so, probably early next year. It's a shame because we were really looking forward to this tour, but I guess we'll be even more up for doing the shows next time round."

Your next single 'Outwards' is on course to being your most successful to date. Do you think 2007 will finally see Kubichek! go onto bigger things?

"It would be nice, although to be honest, we don't really think too much beyond making our next record. Hopefully with 'Outwards' we'll be setting things up nicely for the album, and it is only a fairly limited release so I can't see it setting the charts alight just yet."

You've been working with highly celebrated producer Dave Eringa (Manic Street Preachers and Idlewild to name but two of his most noted compadres) on the album, entitled 'Not Enough Night'. How did this come about?

"It was quite funny thinking back how we came to work together. We've changed management recently and we drew up a wishlist of producers who we wanted to work on the next record. To be honest we thought we had no chance of getting any of them, particularly Dave, but he's been amazing to be honest. It's probably the first time we've just been able to concentrate on the music to be honest, as with recording demos, you're tempted to keep re-recording the same thing, and then someone won't be happy with it so it's constantly being tinkered with. Dave's techniques are just so different to anything we've experienced in the past. We spent fifteen days in the studio with him - 14 hour days too - and there were no set preparations or expectations as such. Needless to say, we're really happy with how the record sounds."

Are there any plans for another single before the album comes out?

"Yeah, it's probably going to be 'Nightjoy' again. We've totally re-recorded it, and the new mix is much harsher than the original version, whilst still being fairly radio friendly as well. We've made a new video for the single as well. In fact, this will be the first time we've actually made a proper bonafide video, as the original one for 'Nightjoy' was basically Al's brother following us around with a handheld digital video camera!"

The last time I spoke to the band at the Nottingham DiS show in June you seemed quite disillusioned with the whole music business. Has there ever been a point where you felt like packing it all in?

"I don't think we'd ever stop making music, because it's something we all love doing, but the politics of this busines can be so irritating at times. During the summer, all we wanted to do was get a release out, and Kitchenware said they wanted to put our single out, but that we had to compromise and put it out as a split release with The Motorettes. As much as I like The Motorettes, I don't think that helped either band too much to be honest, and from our point of view the recording of 'Opening Shot' was too low in the mix and sounded quite tinny. It was around that time that we met a few interesting people who gave us a new insight into what we should be doing and where we should be heading next, culminating in us getting new management."

"Funnily enough, I don't think we have signed the contract yet! But seriously, because they were the most keen out of all the labels we spoke to, and seemed the most enthusiastic about working with us. There are a lot of parallels between us and them too - we consider ourselves to be a DIY band and they're pretty much the same with the label, plus neither of us are exactly rollin in money either. The deal is a basic 50/50 split, which is quite unique as a lot of labels tend to want a bigger cut, but as long as they can afford to fund their next release they're quite happy."

Now that The Futureheads have been dropped by their label, do you feel that a lot of the attention that was focused on the North East music scene has been lifted?

"It's hard to say to be honest. I think it's more of a visibility thing. I mean, the North East was never in vogue like Sheffield or Leeds anyway, so from that point of view I don't think any bands from our part of the country were ever under the same level of pressure. Having said that, I think the music industry puts too much pressure and expectation on new bands now to deliver a conveyor belt of non-stop hit records. Look at The Futureheads with their second album. It might not have had the instant pop songs of the first record but with time I think it'll be viewed as a lost classic. Same with The Rakes. They were given a couple of weeks to write a single, came up with 'All Too Human' which I think is by far the worst thing they've recorded to date and done nothing since. It's like being back at school where you're given the title of an essay and told to come back in a week with 5000 words, only in this case you're expected to come back with a poppy, radio-friendly, killer riff filled, surefire hit record in a fortnight. It's ridiculous!"

So have the band finally been able to pack in their day jobs?

"Yeah, although that's more to do with the fact we've run out of annual leave and sick leave so most of us had to quit before we got the push anyway! We'll probably be looking for jobs over Christmas so any prospective employers reading this...but seriously, if I could carry on making music for the rest of my life and get a basic wage similar to what I used to earn I'd be quite content."

Their new single 'Outwards' hits the shops on 11th December.

You can also watch a live podcast of the band HERE.