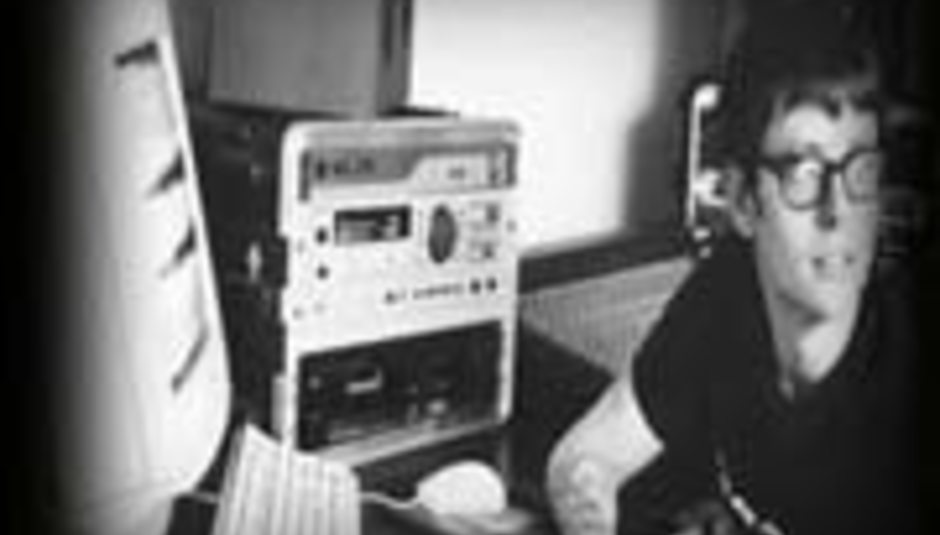 by Mike Diver October 17th, 2005
Late August, London: Marc Bianchi is waiting, press officer to his left, in a vegetarian café just off Charing Cross Road. Waiting for a late journalist (who will, in turn, write up the subsequent feature a little later than hoped). Said journalist is, obviously, me.

Still, I'm looked upon with some sympathy when I arrive - London's network of pedestrian subways and subterranean train lines have broken the sweltering heat barrier, and I'm less than comfortable down there (and there, and there) when I collapse, breathlessly, through the door ten or fifteen after the prearranged time. Still, it's not all bad: the sun's shining, albeit through a thick smoggy haze today, and Bianchi's in good spirits. He's in London simply to talk shop, no gig to hurry off to come the conclusion of our chat. His spindly, tattooed arms stretched before him, he smiles accommodatingly. Her Space Holiday's new record, The Past Presents The Future, is released in a few weeks - by the time you read this it's already available in your local record store - and Bianchi, author/performer of the piece in question, is happy to talk it up. But, first, a diversion...

First, the spider incident. We heard you'd been bitten by a particularly nasty bugger in Japan, and that you were, for a time at least, in a life-threatening position?
The details are a little random - a little gray - about what happened, but this is what I know. In the middle of our trip to Japan we decided to get away to this little country town, and we stayed on a lake, so there were lots of bugs around. When we got back we had two days left in Japan, and I noticed that my foot had started to get a little red. I assumed it was because we'd been walking around a lot, but it kind of hurt a little bit. Then right before we were to go to the airport, I woke up in the morning and my leg was totally swollen. The plane trip was about 12 hours, and about two hours into it my leg just started getting bigger. By the time we got off the plane I couldn't walk at all - it looked like I had a red sock on. My friends helped me hop along on their shoulders, and then my mum picked us up and she was like, "We've got to get you to the Emergency Room." I thought that maybe I'd sprained my ankle, so when we went to the ER and the doctors looked at it, they rushed me into the back. They didn't tell me what they thought it was, but took my mum out of the room and started talking to her. She came back in and looked really panicked. The doctors told me not to move, but after a few days the infection started moving up my leg, and then they said it was a highly toxic insect bite, probably from a spider. They put me on antibiotics and told me that if I'd come in maybe two hours later I probably wouldn't have made it. They drew this black line around my leg, and said that if the infection spread above it at any point I had to come back to the ER - then it would be serious. They put me on these antibiotics and checked me every two days, and the infection didn't spread, so I survived. It's a little red still.

Tape clicks off but we talk a little longer, Bianchi later remarking that our interview wasn't much like an interview at all, but rather a more social encounter, and says that certain journalists have gone on the attack from the outset, looking to pick holes in his lyrics or to suggest that his heart-on-sleeve approach isn't wholly suitable for impressionable youths. Me, I say that Bright Eyes beat him to it, commercially at least, so what's the deal? Bianchi's never likely to compromise, lyrically, but at least his latest work, The Past Presents The Future, finds his mind in a much happier place than the much-acclaimed crossover record. It's a record that's both tender and taut, as cold and mechanical as it is warmhearted and human. Like The Young Machines it's a certain grower, so don't be too surprised if those 1,400-capacity shows are considered intimate in another two years' time.