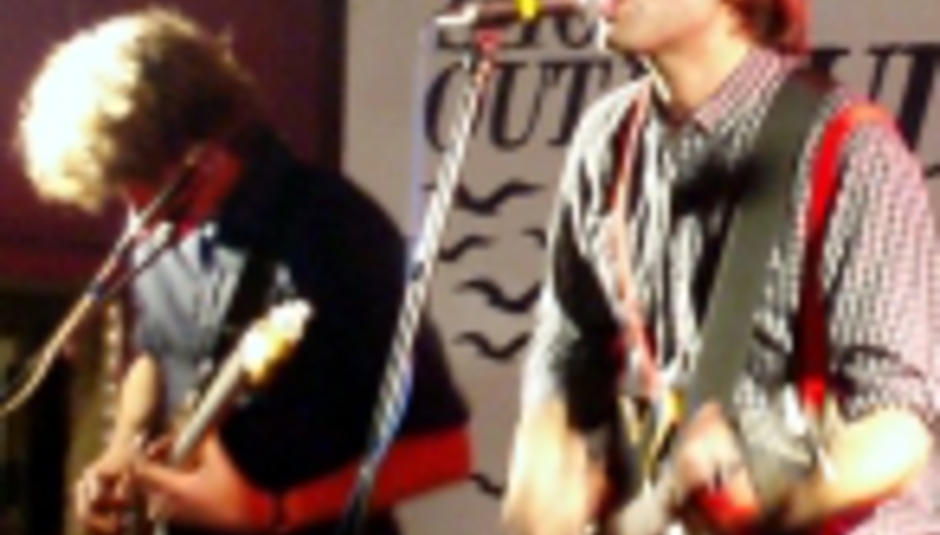 by Fiona McKinlay September 21st, 2005
It's a sunny afternoon in London town and Carl von Arbin, guitarist with Swedish indie-pop quintet Shout Out Louds has joined us on a bench in the courtyard of 93 Feet East (previous to their headline slot) for a quick chat. We will later be joined by frontman Adam Olenius.

How's the tour going?
Carl: It's been alright. We've been out a week or something. One and a half weeks maybe.

I wish I could have been in Glasgow on Monday...
Carl: King Tuts? I like that place.
Loads of bands love it because they actually feed you. What did you get to eat?
Carl: We got chille con carne. It was too good an opening act as well. I can't remember their name, but we've been playing with local opening acts and there's been various kinds, but they were pretty good.

Have any of them been really bad?
Carl: Yes...

What was it like supporting Kings of Leon in the States?
Carl: It was weird because the venues are so big. It was two or three thousand capacity venues, and we're more used to smaller venues. And they had a very big professional crew and everything as well, but they were all very nice and they took care of us. And the Secret Machines were really nice as well.

Who are the best bands you've toured with?
Carl: I really liked the Dears. There are a lot of Swedish groups we've been touring a lot with as well, but they sing in Swedish and stuff so... they're good friends. I would say probably the Dears. We've been travelling with the Magic Numbers for a few dates here and there, and then we're going to meet up with them in Amsterdam on Sunday and do a few more. I really like them, but we haven't had a proper tour with them, so I would say the Dears.

How would you describe your music?
Carl: It depends on who I'm talking to, actually. Like if I'm talking to my parents or if I'm talking to some old friends... I would say it's a poppy, melodic, guitar-based band with nice little harmonica and accordions and tambourines and hand claps.

What have been some of the best and worst things you've had written about the band?
Carl: I don't like comparisons, because nobody really wants to be just like someone else, but of course I understand because it helps for more people to understand what kind of music it is. The best comparisons are just to the bands that you like, so the question is really just what bands do you like and what do you not like, actually. And I don't want to really answer that.

All my friends reckoned you sound like The Cure.
Carl: We get that sometimes, yeah. I don't mind that.

What about other Swedish bands you get compared to like The Concretes and The Wannadies?
Carl: I like them. There's a great music scene. Do you know Radio Dept? They're a really good band. There's a lot of do-it-yourself bands in Sweden, with computers. It feels like people are sitting at home and recording a lot, and there's some good things coming out.

Who are your biggest musical influences?
Carl: Right now I'm really listening to a band, Yo La Tengo, my favourite band. I've got all their albums.

How does playing in the UK compare to playing in Sweden?
Carl: It's weird because this album was actually released in Sweden two years ago, and it's the same thing like when we first released an EP there and start touring, and at first its just your friends and then people are catching up. It feels like we're doing the same thing right now [in the UK] or something. In Sweden, either way if you're an opening act or not you get food. You get food as you come to the venue. We're all very interested in food. Adam: It's all you think about, playing or when is the next time to eat. That's how you sort your life. Playing or eating.

What are your ambitions as a band?
Carl: We never really had ambitions in that way. It just started out as a hobby and it's turned in to something else. Whereas I still don't want to see it as a job though, but right now it's taking all my time. Adam: I think we get more ambitions now when we get a bit more known. You find that you inspire people now, and it's quite interesting to do so. We want to keep being creative and I think that's the ambition we have, to produce music. It becomes more and more important doing so, I don't know why. When you notice that what you do is quite alright.

Where did you get the inspiration for 'The Comeback' video?
Adam: Our bassist Ted makes the videos, him and his brother. And the idea was more or less like how we find everything that is coming about right now, like your being watched and being interviewed like this, and it's a strange feeling. That's just like summing it up what it's about.

What will be your next single in the UK?
Adam: I don't know. It's strange because when we released the album in Sweden we were more... we're still very involved with what we do, but we're not really involved with choosing singles. We're on a very small label back home so we did everything with him, the owner of the label, so we discussed singles. But it's all different, I think we're maybe putting out a different single in the US, a different single in Germany, it's hard to know what their plans are. I think I would like to have 'Please Please Please' as a single, but I don't know. We'll see.

Have you started working on the second album yet?
Carl: A little bit, yeah. Adam: The plan is to record some time in Spring. We'll try and get in to the studio after Christmas and see how much time we have.

And you do your own artwork...
Adam: Me and Carl, yeah, and a friend did some of the illustrations. I really enjoy old jazz posters and the colours they use. Carl: We always had two wolves as a symbol when we were doing demos and things, and we had the name ['Howl Howl Gaff Gaff'] so the cover is basically us howling against the moonlight, our silhouettes.

Who's idea was it to change your name to Shout Out Louds?
Carl: We found out there was another group called Luca Brasi in the US. Adam: We were trying to build our own website or something and found out that there was another band [with the name], so we just decided to change it in case we had to change it in the future anyway, when we might have had a record out. So we sat down and we talked about all the things we had, like all the artwork and all the illustrations and the lyrics – all the stuff we'd produced – and just took the name out of that. It's more like a puzzle and taking a piece out.

Are you going to play '100 Degrees' tonight? Please please please...
Adam: It's funny, that was the first record we released as an EP back home and it was kind of an underground hit for a while so we got pretty sick and tired of playing that song. We haven't played it for a long time, and then in Glasgow they shouted it and last night in Manchester they shouted it as well, so we're going to add it on to our set list. Carl: We aren't supposed to play it either though tonight. We haven't played it for a year or so. Adam: We might add it tonight. We'll see.

And so with the hope of maybe getting '100 Degrees' in the set, we part company. Within seconds, Carl and Adam are wittering on to each other in their native Swedish. A couple of hours later, snugly sandwiched between 'Wish I Was Dead' and 'Hurry Up Let's Go', they play it, and despite Adam forgetting the words to the second verse, it's great. Oh yes.