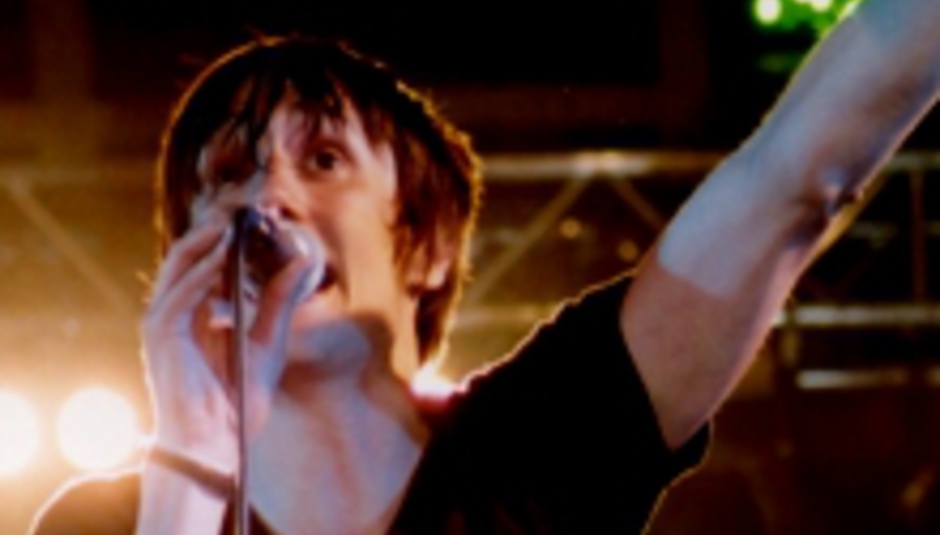 by DiS Festivals September 2nd, 2005
On a Thursday night, the general plan at festivals is to prepare your liver for excessive drinking by... drinking. At Leeds however, it's all about the Cabaret tent and a performance from DiS Recordings' thisGIRL. With a heart-warming crowd reception and a rammed tent, it's a great opening night and gave everyone a warm-up for the weekend ahead. Playing a few new tracks alongside live favourites 'Bling Bling Bling' and 'Hallelujah', the Rotherham boys rock out smackdowns into the faces and handclaps of the audience with veritable aplomb. This should happen more often.

iForward, Russia! (Carling Stage, Leeds, Friday) seem to revel in front of a home crowd, however irrelevant that may be at a festival. Their twenty-minute set is not quite enough, cutting last song 'Fourteen' from their set, but it's a predictably decent perfomance nonetheless, if a little flattened by the sound in the tent.

iLiKETRAiNS (Lee Unsigned Stage, Leeds, Saturday) live two doors away from iFR! in Leeds. Musically though, there's a few counties in the way. Morbid. Morose. Murder. Doom. Not words to be taken lightly, and indeed this Leeds band do nothing lightly. Their brooding, building noise swarms lushly around you in a wall of melancholic wonderment and with a sold-out first single under their belt and a new one on the way, you can't imagine the quintet on the unsigned stage next year. Leeds is lucky enough to play host to a wealth of new unsigned talent via the aforementioned Lee Unsigned Stage, arguably the highlight of which is 65daysofstatic (Lee Unsigned Stage, Leeds, Saturday), whose intense electro-post-rock suffered only mildly from a quiet PA, due to being unashamedly awesome. Playing a few new tracks from their forthcoming LP, the band appear to enjoy being back in the live foray. Speaking to DiS afterwards, guitarist Joe says, "It felt great to play the show," and comments, "The new record sounds really weird... we all adore it though, we can't wait to get it out there."

Doing the grimy trucker thing with serious rock implications is still a much lauded treat wherever you go, and Future Ex-Wife (Lee Unsigned Stage, Leeds, Friday) are no exception. Ones to watch, for sure.

Those who've shied away from Mystery Jets (Carling Stage, Reading, Saturday) on the shaky grounds of them being 'difficult' or 'pretentious' miss a treat in the packed confines of the Carling tent. Benevolent and odd but blessedly untwee, they're clearly well-suited to a sunny festival set, pasting the boisterously madcap to the indisputably danceable with the glee of a playschool class let loose among the gluepots. The crowd spasms, the guitars reverberate off a sea of smiles, and a flock of MJ logo-emblazoned balloons bob above the crowd. It's glorious and frankly lovely.

DiS' only regret is that they clash with Million Dead (Lock Up Stage, Reading, Saturday) whose clever and weirdly, heavily graceful musicality, displayed to great effect on their recent second album Harmony No Harmony, is difficult to appreciate when one stumbles in at the tail-end of it. Nonetheless, after their Reading cancellations of the past, it's cheering to have to fight through a full tent to enjoy one of Britain's most underrated bands.

Komakino (Carling Stage, Leeds, Saturday) play like they've something to prove, and in many ways they have. The press surrounding the band demands an exceptional performance and Ryan & co. do not disappoint. It's easy to see the bands at festivals who have been gigging for ages and Komakino are one of them. With a firm grip on their material and an enviable onstage demeanour, the future is opening up.

When it comes to experience though, few on the bill carry as much as Sleater-Kinney, (Carling Stage, Leeds, Sunday) who perform in front of a criminally small audience in the early evening. With Corin and Carrie on as fine form as any dirtied indie boy could have prayed for, the songs from the trio's latest sound immense. Scratch that, it ALL sounds immense and should play on a bigger stage to more people. In a spate of depressingly small audiences, Blackalicious (Dance Stage, Friday, Leeds) still deliver luscious beats and deviously conceptual rhymes while sounding tighter than ever before with some schizophrenic chemistry and cunning banter. The fact that they’re still 'underground' is truly flabbergasting.

Amusement Parks On Fire (Carling Stage, Reading, Sunday) are perfect for two blissful minutes, gorgeous and organic and faultlessly harmonious. Then their separate elements slide out of alignment, resume their own orbits, and the miracle's gone; they slip from spellbinding to sluggish. They're clearly capable of better but, playing to a largely empty tent, tonight isn't their night.

Buck 65 (Dance Stage, Leeds, Friday) has that one on his new record that goes all drum 'n' bass. That's good. And the saucy French one about making a dirty baby. We like that one too. Later DiS spots him running for the toilets in the guest area. He's a real person too and has some of the best live sound all weekend.

Test Icicles (Carling Stage, Reading, Sunday) could, in some way, be perceived as a joke when they are in fact FUCKING AWESOME. Their backing-track-enhanced fret-shredding everything-core is exactly what every festival should have. A set where you smile, dance and bop along, offset against the sunny backdrop of a massive field makes even the most watered-down beer taste like the finest ale. The circle pit of Slayer fans merely added to the experience and the smile of pink-guitar-wielder Dev.

The Go! Team (Carling Stage, Leeds, Sunday) are clearly one of the most interesting, dynamic and fun bands that the UK has to offer, the problem is that nearly every time DiS stumbles across them on a live stage, the sound is dishearteningly bad. Unfortunately, today is no exception and whilst you can hear a vibrant, summery sound waiting to wash across the audience, it never quite escapes the evil PA. Still, the new material sounds fantastic and they’re a visual treat as always. Young Offenders Institute (Carling Stage, Reading, Sunday) are brutal: aesthetically brutal; brutally tuneless; brutally yobbish; and brutally Oasis circa Definitely Maybe. Apparently, they're the new lovechild label children of one Anthony Wilson. I guess with age doesn't always come great wisdom AND their name doesn't have the grammatically correct apostrophe, which is disgraceful.

It's criminal that more people didn’t check out the festival's most electric performer, Saul Williams (Carling Stage, Leeds, Saturday). Despite playing to a crowd that almost certainly had little time for hip-hop – they were here for Maiden et al, after all – Saul left those that braved his quicksilver tongue moved, both physically and mentally. Absorbing his rhymes is an exhausting experience; considering them is an absolute pleasure.