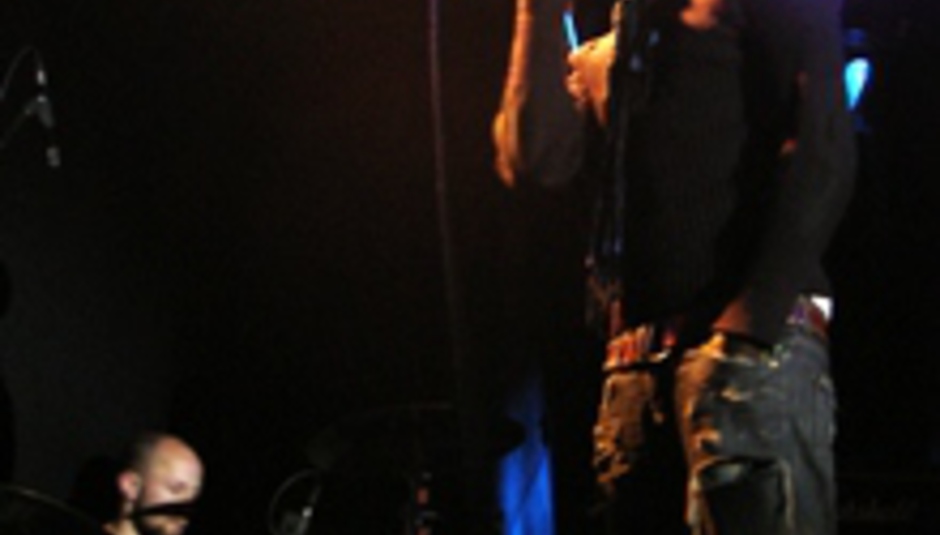 by DiS Festivals September 2nd, 2005
The Cabaret Tent: not the first place you'd decide to venture to on your Saturday night in Leeds, most were off with Pixies and Ladytron or even, God forbid, Kasabian. It was here, however, where the most special event of the entire festival was about to take place.

For ten minutes, the most poignant and intelligent poet of our generation – Saul Williams – speaks more sense than any BBC documentary, in the most incisive, articulate fashion you could ever imagine. "There's going to be some musicians joining me now, we've only just met so who knows what's going to happen." The four slight figures of Youthmovie Soundtrack Strategies take to the stage and, replete with the drifting piano of "Huggy" Hugo, play the most beautiful backing to Saul's words, lifted from his past work. Entirely improvised, executed perfectly. This was where the festival was. Fifteen minutes and two numbers later, Saul thanks the band and, seemingly surprised that it even worked, the band thanks him. Backstage, Saul has to leave; with parting words, Youthmovie exclaim, "We'll all be at All Tomorrow's Parties – see you there!" Saul re-enters and says, "You guys are going to be there? We should keep in touch." They really should. Moments like this are the kind of one-offs that you'd want everyone in the world to experience, if only to validate your own awe.

Thirty minutes later and YMSS are back to play another competent set of songs from their mini-album Hurrah... as well as a rare outing for 'The If Works' from their previous effort. The band are well aware they've been gigging this material for a long time now, but it still sounds as dynamic and exciting as it did on day one. Youthmovie are a vital component of the British music scene and arguably the best live band to reside within it. One can only hope their forthcoming LP can progress and deliver the most interesting listening experience feasible.

As the shambolic DJing video direction duo Matt & Ed of Type2error draws to another close, Youthmovie take the stage once more, this time accompanied by dancer Adrienne and the visual treats of the aforementioned Type2error. The idea of a band building a new piece of music around Elgar's treat 'Nimrod' sounds mindlessly pretentious and if you hadn't heard it, you'd probably still be under that impression. The fact of the matter is that the twenty-six minutes of music, dance and visuals this evening are the most impressive display of artistry many will ever see. As a mathematical opening rains around Hugo's driving piano, a world opens up around us, then we are thrown off the side of our steady cart into a swirling, droning world. Ten minutes of sublime, incomprehensible but unfathomably beautiful noise. I cry, there are tears in my eyes and they run down my face; you realise that this is why you love music, why it means more to you that anything else in the world. Seven minutes of mindlessly impressive proggery close around Adrienne's increasingly hypnotic and rhythmic dancing and Type2error’s sublime imagery. You can look outside the tent and see people filing away from their Kasabian, their Pixies, but inside the Cabaret Tent, there's a minor revolution. We were part of a revolution and it was all-consumingly perfect and the most inspiring display of musicianship you could ever have hoped for.

Error in Movies by: Colin Roberts