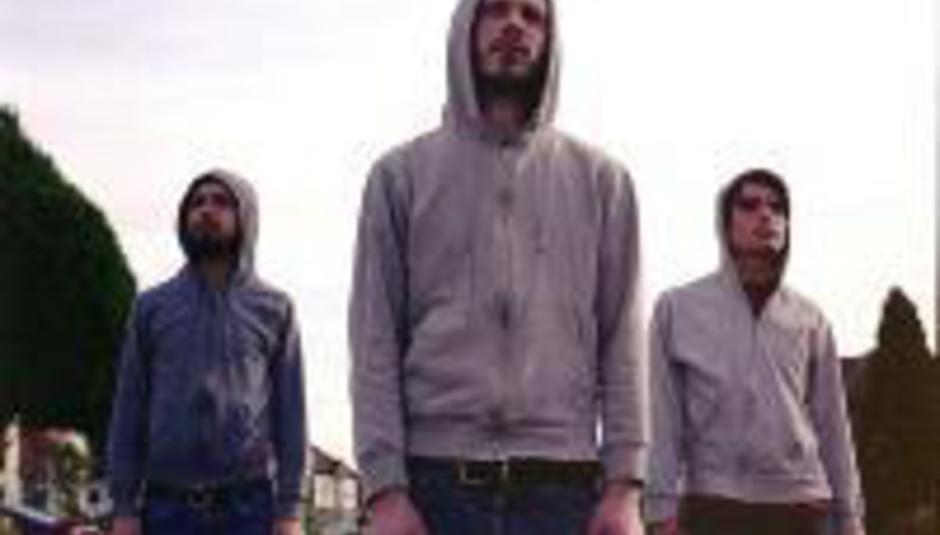 Trencher are three men, known to their parents as L***, M*** and R***, but to the thousands of grind-minded individuals the length and breadth of this country and beyond they’re referred to as Lock Monger, Milk Shit and Pox respectively. Two-thirds London-based, the band’s pioneering sound – mixing amazingly intense drum and bass workouts with primitive and often purposefully cheap-sounding keyboards – has spawned a number of influenced-bys, if not any imitators. To be honest, it’s all but impossible to replicate the taut extremities of Trencher’s music.

Regulars on the London hardcore-cum-punk scene for as long as this writer can remember, the often called ‘Casio-core’ three-piece are about to unleash their second full-length, Lips. The Southern-labelled long-player, which contains such delightfully-titled efforts as ‘Mouth To Anus’ and ‘Chatter Of Slimy Teeth’, is the follow-up to 2004’s When Dracula Thinks “Look At Me”, which was released via no fewer than six different labels including Jonson Family and Victory Garden.

Fiercely independent, Trencher record and tour under their own steam and at their own expense – the link up with Southern, home to the likes of Todd and William Elliott Whitmore, has allowed them to recoup certain outlays, but they’re primarily in the habit of doing things by themselves, for themselves. Recently they toured the UK with Daughters!, and also appeared with Baroness in Nottingham. DiS caught up with Lock Monger and Milk Shit – drummer and keyboard player/vocalist respectively; the absent Pox is the band’s bassist – at a well-known coffee chain on London’s Liverpool Street: not particularly rock ‘n’ roll just doesn’t come close. “I just don’t really feel like drinking,” says L. Monger as we cross the road. “Ooooh, do you know if Maccy D’s does Quorn burgers? I fancy one.”

Are you vegetarian? “No, I love meat.” Um, okaaaay…

Okay then, this ‘Casio-core’ term that’s stuck with you since the early days – is it a joke, really, that’s just got out of hand?
M. Shit: It’s just a label. I mean, you’re gonna either love ‘em or hate ‘em, and if you do love ‘em you’ll get sick of ‘em in the end. I dunno… I think it’s an easy way to define us, and it is what it is. It helps people. It’s probably not that good a description of how we sound, but it’s better than saying something else that a lot of bands get called.

I guess it’s so associated with you now that to lose it, to turn against the categorisation, would almost be detrimental? It’s interesting to read about other bands being described the same way now, such as Cutting Pink With Knives and Rolo Tomassi… does that make you pioneers in a way?
L. Monger: Yes!
M. Shit: Ha, yeah, I guess so in a way.
L. Monger: I do definitely feel that, though. I know it’s a bit out of control, but… I guess it’s all swings and roundabouts.

And do you think that Lips is a real evolution from the first record, from the music that influenced said band?
M. Shit: Oh yes. We’re very happy with it.
L. Monger: We couldn’t have just made that first album again.
M. Shit: I actually had a listen to Dracula the other day, for the first time in a long time, and I was pleasantly surprised at how much I enjoyed it, even though I know it’s not at all like how we sound now. It was a good starting point.

You’ve put out so many smaller releases alongside the albums – you must be fond of the physical format, particularly vinyl?
M. Shit: Definitely.
L. Monger: I’ve never downloaded anything in my life. I think our album will be available, though, somewhere like Russia.

The new album looks – and don’t take this as a slight against preceding releases – a lot more ‘professional’. It looks A Big Deal…
L. Monger: We have to rise to the challenge in that respect, because the first album was one step up, and the Peel Session was another. Then we started to be taken more seriously. I mean, we could have given Southern a Dracula-type album, but that’s not what we’re about. You’ve got to stay one step ahead of the game.

And Lips has been delayed a bit, too. When was it actually recorded?
M. Shit: It was recorded in October and November last year. It was mastered in January and February of this year – it was recorded and mastered by John Hannon – and the artwork has taken a long time because the guy that’s done it for us, who also did our splits with Othrelm and Cutting Pink, had to go on national service in Switzerland. So that held it up, but we really wanted him to do it. It was worth the wait.

You’ve just come off tour, playing with Daughters!. How was that?
M. Shit: I thought we were a good combination, Daughters! and Trencher, as we’re similar in some ways but quite different, too.

Do you think that a lot of people that aren’t really into this sort of extreme music, because they’ve such a small frame of reference, just put bands together without noticing all the differences? It’s like you’re not that close to Daughters!, or someone like An Albatross, or Lightning Bolt…
M. Shit: Yeah, it is easier for people that read and write about the stuff for it to be bunched together.
L. Monger: But at the same time I think that we kind of, errr, straddle movements. It’s like we can play Europe with electronic acts like Scotch Egg, and then we can play hardcore crust shows, which is where we started out. And then we can play with Lightning Bolt, and Daughters!… We appeal to the extreme in people, I think. We talk to people afterwards and they say we were intense or brutal, and I…

I always end up grinning stupidly at your shows, though. Yeah it’s heavy and intense, but funny too, not in a detracting way…
L. Monger: It’s like a bear attack. Some people can find that funny.
M. Shit: Personally, I’ve been developing a kind of philosophy about Trencher, as it goes along. It’s basically about a combination of brevity and gravity – total lightness, but as heavy as possible. All smooshed together, to create a heady brew… like this hot chocolate. Thank you, C***a.

My tea’s a little bit milky, actually. I guess you can relate to that! I notice on the new album that you’ve kept the not-your-names names on the sleeve…
M. Shit: R*** is going to change his, though, to R***feratu. Or R***putin.

But things like that, they lend the band an air of not-quite-seriousness. Yeah, the music’s grindcore or Casio-core, or whatever… but it’s a lot of fun, too.
L. Monger: That’s the main aim of entertainment, or entertaining, though – to make people have fun. At the same time, everyone has their pain in life and everyone has their problems, and we want to laugh about the pain… channelling through sound and bear attacks.
M. Shit: Personally I take Trencher quite seriously because of the stage we’ve got to, but fundamentally it’s still all three friends having fun together. And I don’t necessarily want people watching us to take us totally seriously – I want them to have a good time and laugh at it or be in awe of it, whatever. When I play I don’t watch people, because I’ll fuck up, but if I get the chance it’s interesting to study people.
L. Monger: It’s always hard to tell what people are thinking. Sometimes people are totally moshing out.
M. Shit: I have noticed, perhaps because of how the songs have developed into something less chaotic, more people at gigs are moving… they’re starting to pick out rhythms and stuff now. And waving lighters. And moshing, and we’re happy about that, because they’re obviously enjoying themselves.
L. Monger: There was a massive mosh in London. And in Southampton…
M. Shit: There’s one song in our set where there’s no keyboards, so I get to run around with the mic; it’s the only one we’re doing now whereas before we did tonnes. So, at the Joiners, I jumped down – I always love to do it – and as soon as I ht the floor someone smashed into the back of me and knocked the wind out of me. But it was good fun.

And good fun is exactly what Lips is, albeit the sort of fun that crawls into your brain, dragging a tiny axe, and proceeds to chop your grey-matter into stir-fry-sized chunks. You can DiScover more about Trencher at their MySpace page, here; they write that they sound like “twenty dying spastics, no offence”. The video to ‘Mouth To Anus’ can be seen by clicking here.

Lips is released via Southern on November 13. Photograph by Sanna.