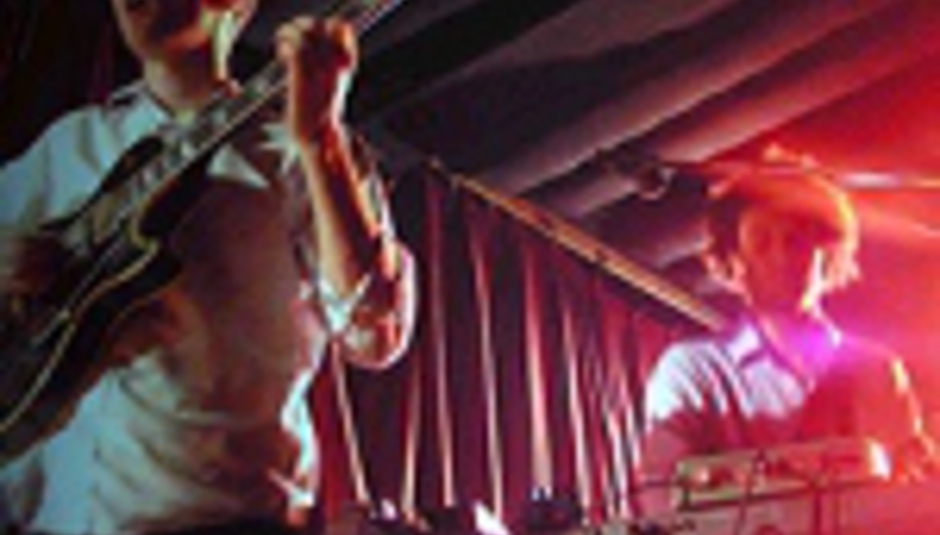 by Adam Anonymous July 15th, 2005
SuperSonic 2005 might’ve ended in unsettling evacuation, controlled explosions reverberating the tarmac outside, but as Birmingham’s city centre was cleared amid security alerts, shockwaves from two perception-altering acts remained most lasting. Lucky that dropping sonic bombs is the only terrorism we’re interested in round these parts, then.

MD: Before getting to Adam's assessment of both Battles - who for me were the gobsmacking, high-crashing highlight of the day - and the ever-engrossing and totally without peers dälek, I'll offer a brief overview of those bands DiS witnessed prior to the festival's double-header of aural triumph and subsequent panic.

Aereogramme open the main (outside) stage - Esquilax don't show, no reason given - with a flourish, their post-rock-gone-

waaay-wrong resonating about the window-rich walls of this all-but-cubed venue like controlled explosions inside a Transit. Inappropriate? Nah: we can tolerate such comments when said actual incidents occur on our doorstep. The Scots are the most conventional outfit on the bill, but most in early are left subtly impressed by their melodic yet mightily forceful set.

Tunng play just prior to the 'Gramme, on the sweltering Medicine Bar stage. Their centre-stage lead singer (although there are three contributing vocals) is somewhat unsettled by the bright sunshine outside (and streaming through the greenhouse-like roof), but the quintet deliver some quietly stunning quirk-folk songs that straddle the fields of electronica and conventional folk quite masterfully, a few technical glitches aside.

Jesu disappoint, again. Back on the main stage, Justin and a bass-playing cohort feedback and fuzzabout for a mercifully short length of time while a laptop dispenses budget drum beats. It's almost as tragic as his/their performances with Pelican last summer. Everything's running late though, so Jesu's decision to play for only around thirty minutes is both a godsend for the ears and the festival organisers. Then, Battles...

Battles (pictured) are the regimented brainchild of current and former players with Tomahawk, Don Caballero and Helmet, with added quirk appeal from a man who, rumour has previously suggested, is the brother of nineties pop-soul chart lass Toni Braxton. None of which can prepare you for a moment roughly halfway into their hitherto merely competent set where drummer John Stanier comes alive with the frightening intensity of Lightning Bolt sticksman Brian Chippendale reincarnated in the body of Henry Rollins. Bewildering minimalist rhythms are whipped into a stadium rock-produced frenzy that vibrates into a genuinely disorientating area behind the sinuses that could cause spontaneous collapse at any moment. Comparisons are pretty well redundant, but if Don Caballero had smoked a bit – no, fuck that, a lot – more, they’d be where Battles are operating right now. Warp Records are on the case, we hear, so more where that came from real soon.

Within grenade-throwing distance of Birmingham’s monstrously ugly Bull Ring shopping complex hub, it’s fair to say had anyone actually taken some plastic explosives to the city centre during dälek, few inside the Custard Factory would’ve heard.

Whispers of discontent within their camp would be scarcely believable from the intensity generated by the New Jersey trio’s dense, dark attack, with rumbling bass choking like asbestos. Leaning heavily on bleak current LP Absence, the resulting cilia-smashing blast of intelligence-laced hip-hop brilliance is fittingly apocalyptic. A mesmerising half hour or so on, MC dälek throws down his mic with a characteristic clunk and they’re out, all soon-to-be-departing onlookers agape. A true banshee soundtrack for the end of the world if ever there was one.

MD: The kick-out is quick and fuss free: a burly gentleman announces that we're to move out onto the street. Rother and Moebius, ex-Neu!, look at their keyboards in disbelief; we shuffle through a bottleneck, stretching necks for friends and phoning relatives for updates. Stephen O'Malley is spotted looking utterly lost, his planned collaboration with Japanese masterblaster Merzbow hitting the skids again; Stuart Mogwai just smiles to himself while those around him - many still clutching plastic glasses of lager - shake hands and discuss the best ways home. We - the London contingent - simply pile into our minibus and hit the M1, bemused as to how lightning can (almost) strike twice. For the residents of Brum, though, the night is a long one with only the constant blue of police lights to warm the cockles. Messages are sent as we reach the safety south of Watford - the friends left behind have found their way home, just about. All told: no real bombs, no blood spilled, no end of the world. So, same time next year?

SuperSonic is organised by the lovely people of Capsule. Pay 'em a visit, why not?